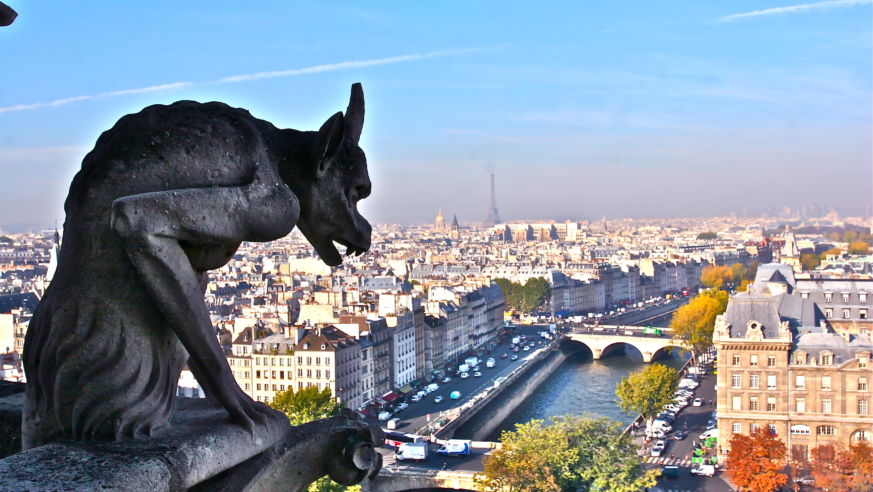 Europeans are among the world's most gracious travel hosts, rolling out a red carpet of good manners, fabulous food, and the ultimate in culture and history. But do you ever wonder what they think of YOU? Here's what we've heard…

1. WE HAVE TERRIBLE FAKE ACCENTS

Ouch. Turns out that posh James Bond imitation you think you've mastered sounds like the squeak of chalk on a blackboard to a Brit. And chances are, even as you read this, you believe you are the exception to this rule—that your Daniel Craig could fool a native? No. Stop. Please.

Boy, those French are unfriendly, huh? Guess again. They're just more physically reserved than you are, and that goes for facial expressions, too. A Parisian, especially when addressing a stranger, will rarely smile, and this is often misinterpreted by American as that legendary (and largely mythical) French rudeness. We, on the other hand, have been taught to approach new people, even total strangers, with our pearly whites bared. Down, Sparky. It just weirds them out.

3. WE HAVE BARBARIC EATING HABITS

From way up in Scandinavia all the way down to Sicily, Europeans seem to be united in the opinion that Americans don't know how to enjoy a meal. Yep. Shocking as it may seem, the country that invented "fast food" and the "power lunch" puzzles its neighbors across the pond when it comes to table manners. Apparently, we start eating before it's considered polite, we don't stop to talk enough, and we perhaps miss the entire point of chowing down in the presence of other human beings. Wherever you may be visiting (but especially southern Europe), if you sit down to eat with locals, we suggest that you just quietly tell yourself, "Slow down."

4. WE ARE BAD DRINKERS

Ok, in fairness to my American brethren, it's true that in some corners of Europe it is common to outdrink Americans at a truly magnificent pace. But overall, the European approach to beer, wine, and spirits is similar to their approach to a nice meal: What's the rush? It's perfectly acceptable to savor a two-hour lunch that includes a few goblets of wine. But binge-drinking is considered a weakness, especially in wine-producing regions, where the vino is regarded as much a food as a beverage.

Except in a few major economic centers, London in particular, the locals aren't going to be terribly interested in hearing your workplace war stories, how much money you're spending on your vacation, or how much your house back in the States cost. The country you are visiting may even have strict rules or customs about the length of a work week. But more importantly, Europeans just know how to pursue a work/life balance more healthfully than Americans: Take time to sit down for coffee and a croissant in the morning, consider an afternoon nap (if you're staying with your Italian cousins, they may insist on it!), and if you head out to dinner in, say, Barcelona, expect the tapas to go around the table well into the wee hours. Relax!

6. WE ARE SCARED OF NUDITY

Whoa. Really? But isn't American culture awash in cutting-edge body parts and potty mouth? Yes, and that's actually a sign of our priggish problem. In many European cultures, the human body is considered simply, well, the human body. Our fascination with certain anatomical features is not shared by Europeans. That's why in some regions of Europe you'll see nude bathing and hear jokes that would make your mother blush. Next time you see a photo of the inscrutable Catalan Christmas pooper, just say to yourself, "Don't judge. Remember, you are a prude."

7. WE ONLY SPEAK ENGLISH

Be honest. Did you even know that "Sochi" was a thing before the Russian city hosted the Winter Games? Is Trieste in Switzerland, Croatia, or France? We're not suggesting that you prepare for a geography bee before boarding your Paris-bound plane. But, gosh, get some arrondissements into your short-term memory, remember that Marseille is France's second-largest city, and understand that "Omaha Beach" is not what the French call that stretch of Normandy coast. (Btw, Trieste is in Italy.)

9. WE NEED THE FASHION POLICE

This applies to American men more than women, and it's difficult to argue. On any given street of any given European town on any given day, I will not be able to compete with the stylish dress of the gents who pass my way. While a few decades ago this may not have been the case (I can imagine Don Draper holding his own against an onslaught of silk-suited Florentines), my generation has admittedly opted to dress like overgrown boys, and our T-shirts, baggy jeans, and five o'clock shadows scream "Yank."

I say kudos to Europe's schools for instilling in their citizenry the ability to understand the difference between Bill Clinton and George Clinton. Unfortunately, Americans' grasp of European and even American history is often as sketchy as their grasp of geography. So just know that when you drop a name like Churchill or Garibaldi overseas, you are inviting a conversation in which you may eventually be called upon to remember who sold President Thomas Jefferson the 800,000+ square miles that now comprises all or parts of Arkansas, Missouri, Iowa, Oklahoma, Kansas, Nebraska, Minnesota, North and South Dakota, New Mexico, Texas, Colorado, Montana, Wyoming, and, of course, Louisiana.