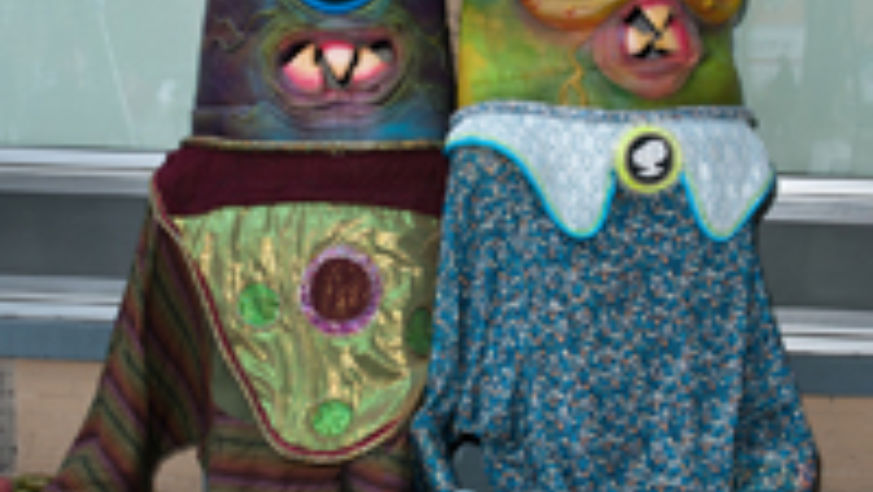 Once a year, we put on masks and devise creative ways to scare one another—and have a lot of fun doing so! As we gear up to celebrate Halloween this weekend, we tip our hats to eight places that are known for their spooktacular extravaganzas.

SEE PHOTOS FROM THE FESTIVALS

The Village Halloween Parade is considered to be the nation's largest, with more than 2 million people attending annually. (And even if those numbers aren't entirely accurate, there's no doubt that the Village parade is the only Halloween celebration listed in 100 Things to Do Before You Die.) The getups range from pop–culture figures (Snooki was popular last year) to eye–popping extravaganzas (one participant dressed as a Tusken Raider from Star Wars, riding an elephant–size Bantha puppet), along with a motley assortment of giant puppets, stilt walkers, and marching bands. Feel shy about getting gussied up? Try volunteering to carry a puppet. (Go to halloween-nyc.com/volunteer.php for info.) [Note for families: Many of the costumes in the parade can be considered inappropriate for children.]

When: Activities are throughout the month of October

How Much: Prices vary per activity

This infamous home of the 1692 Witch Trials capitalizes on its macabre history throughout the year, with occult–themed museums, guided tours, stores, and psychic readings. (There are even flying witch logos on the local police cars and firemen uniforms.) But the town is a mecca for tourists during its Halloween Happenings, a month–long celebration that attracts 200,000 visitors a year and is bursting with themed events: a carnival; a haunted cornfield maze; numerous theatrical presentations, including one haunting piece performed at the 17th–century mansion of a Witch Trials judge; fireworks; and Hawthorne Hotel’s R–rated annual costume party (ages 21 and up).

The self–proclaimed "largest Halloween street party in the world," the West Hollywood Halloween Costume Carnaval in California rivals New York's Village parade for sheer eccentricity, with drag costumes being a focal point. (Last year, both women and men dressed up as the fame monster herself, Lady Gaga.) Besides people–watching, there is entertainment; last year, there were six stages featuring Halloween–themed aerialists, marionettes, a "rock & roll strip show," and a crowning of Queen of the Carnaval. But above all, partiers should put their game faces on: The designated times for the gathering is 6 to 11 p.m., but that doesn't stop people from showing up in costume on the boulevard at noon—and carousing until about 3 a.m. [Due to risque nature of costumes and party atmosphere, this gathering is not recommended for children.]

How Much: Tickets start from $20

Putting your typical community's haunted hayride to shame, Terror Behind the Walls employs Hollywood–worthy lighting and sound and more than 200 actors to scare the bejesus out of visitors. The building itself is frightening enough: the penitentiary, opened in 1829 and once one of the nation's most notorious before being discontinued in 1971, is now the site of abandoned, increasingly decrepit cell blocks, guard towers, and isolation areas. The tour actually starts in the former recreation yard, where actors costumed as "insane prisoners and sadistic guards" do their best to startle you. [For children 7 to 12, there is a less–scary gathering called Family Nights].

Celebrating the 30th anniversary of its annual Halloween event—called the World's Largest Halloween Party!—the zoo gets completely transformed by more than 15 exhibits, such as the Land of Oz, Ogre Swamp, Toyland, and Dino–mania. There are many costumed characters roaming the grounds for photo ops: Captain Jack Sparrow, Dorothy from Oz, and Shrek have all made appearances. One special exhibit is Pumpkinville, USA, a hillside bedecked in 160 glowing pumpkins, all intricately carved by an artist called Black Cat Crossing and many with themes, such as Elvis, John Wayne, and the Beatles. For an additional fee, guests can get on rides like the Not–So–Haunted Carousel and Zip Line Over Pirate's Cove.

How Much: $55 for full–day admission to park plus party; $25 for just the evening party

Legos transform themselves in any season, but the folks at Legoland go all out for Halloween. The centerpiece is the "not–too–spooky" Brick–or–Treat Party Nights built around themes such as Star Wars, Pirates of the Caribbean and Harry Potter. The evenings feature a dance party, a costume contest for children 12 and under (categories include "Best Star Wars," "Most Lego Themed," and "Most Creative"), trick–or–treating, fireworks, and entertainment acts such as jugglers, unicyclists, and stilt walkers. Of course, the party festivities are in addition to 128–acre park's regular offerings, including more than 60 rides, a water park, and food options galore, all surrounded by the kind of elaborate Lego models—a brontosaurus made from more than 2 million bricks, a mini version of Las Vegas that took the park's builders about 16,000 hours to make—you and the kids can only dream about making.

How Much: Tickets start from $52, which is on top of the cost of park entrance (starting at $79).

It's a little–known fact that people over the age of nine are not allowed to wear costumes at Disney World—except during Halloween. Mickey, Minnie, Donald, and Winnie the Pooh all wear costumes, which you'll see during the Boo–to–You Parade, one of many events throughout the evening. There is also free face–painting, a dance show, Happy HalloWishes fireworks, trick or treating (in previous years, the candy has been sponsored by Mars' M&M's and Snickers brands), and the attractions and rides that Disney is known for (Space Mountain, Haunted Mansion, It's a Small World). The Disney characters aren't the only ones dressed up: the entire park is done up with Halloween–specific decor, lighting, and music.

Ah, the charms of fall in upstate New York: leaf–peeping, apple picking, quaint country inns, antiquing—and Hessians feasting on rotting corpses. At least that's what you'll find in the land of Washington Irving's Legend of Sleepy Hollow and the Headless Horseman. The Hudson Valley's Philipsburg Manor has been transformed into Horseman's Hollow, an interactive haunted house populated with vampires, witches, and the occasional Hessian lurking in the shadows and along a half–mile candlelit path on the grounds. This event is not recommended for children under 12, nor, according to its website, "adults who are claustrophobic, have heart or respiratory conditions, are prone to seizures, or have other chronic health conditions." For a less agita–inducing night, try the Great Jack–O–Lantern Blaze, a display of more than 4,000 elaborately carved and illuminated pumpkins at Van Cortlandt Manor, an 18th–century riverside property in Croton–on–Hudson, N.Y., with expansive gardens.

15 Insects You Won't Believe Are Edible

Photo Tour of the Creepiest Churches on Earth