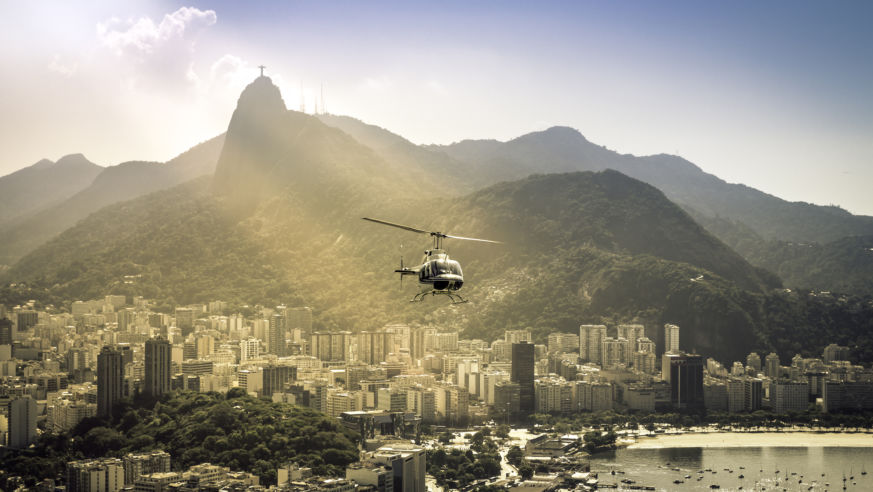 ​Some destinations just look better from the air – and for adventurous travelers, a helicopter tour offers the ultimate sightseeing experience.

We set out to find the most breathtaking helicopter excursions, from beautiful coral reefs and active volcanoes to stunning waterfalls and iconic city skylines. Here are our top ten helicopter tours.

Measuring 277 miles from east to west, the Grand Canyon is an immense chasm carved by the Colorado River. Featuring a unique ecosystem, the canyon is decorated with red rocks that reveal its ancient geological history – in fact, some studies suggest the canyon could be as old as 70 million years. Consider choosing a tour that flies over the Grand Canyon’s stunning South Rim, letting you soar over the widest and deepest part of the canyon.

A helicopter tour is one of the best ways to take in Juneau Icefield, an endless horizon of ice-capped mountain ranges and flowing rivers of ice. Located just north of Alaska’s capital, the icefield is home to nearly 40 large glaciers. It stretches more than 1500 square miles, and is dotted with deep crevasses and azure blue ice.

Australia’s Great Barrier Reef, one of the most sought-after tourist destinations around the globe, is one of the seven wonders of the natural world. Its sprawling reef system, which is spread over 1400 miles, boasts bright sand cays and more than 400 types of coral resting in crystal clear waters – all visible from up above in a scenic helicopter flight.

See the fiery lava vents of one of the most active volcanoes in the world – from a safe distance aboard a helicopter. The volcano erupted in 2018, causing vigorous lava fountains to flow out that permanently changed the area’s landscape. For a fully immersive experience, take a doors-off helicopter tour of the volcano.

You’ll still able to hear the thundering roar of Niagara Falls when you’re looking down at the most powerful waterfall in North America. The falls straddle the international border between Canada and the US, but the Canadian side offers a favorable exchange rate that allows you to take a less-expensive helicopter tour of the three waterfalls that collectively form Niagara Falls.

Care to travel a little farther to see the largest waterfall in the world? A helicopter tour of Victoria Falls in southern Africa on the Zambezi River offers beautiful views of one of Mother Nature’s most spectacular sights. Victoria Falls is the greatest curtain of falling water on the globe. It sprays more than five hundred million cubic meters of water per minute over an edge that plummets into a gorge more than hundred meters below, causing the sound of the falls to be heard from a distance of up 40 kilometers.

Flying in a helicopter over the island of Manhattan provides sweeping view of the Big Apple. You’ll get an up-close view of New York’s most iconic landmarks, from the Empire State Building and Times Square to Central Park and the Statue of Liberty, without having to deal with the throngs of tourists that roam the city on any given day. You’ll also enjoy a panoramic view of NYC’s iconic skyline. By the time you’re back on the ground, the city’s skyscrapers may not seem so tall anymore.

Explore the Himalayas by helicopter on a tour across Nepal’s high-altitude ranges. Soar over Everest Base Camp, the Khumbu Glacier, and Sagarmatha National Park Nepal, a UNESCO World Heritage site that contains areas of the Dudh Kosi river, Bhotekoshi river basin, and the Gokyo Lakes. Flying beats making the typical 12-day round trip trek by foot to Everest Base Camp.

Only slightly larger than the state of Tennessee, Guatemala is home to volcanic trenches, rainforests, astounding Mayan ruins – including pyramids, temples, palaces, and fortresses – and the beautiful Lake Amatitlán, a popular tourist destination. This diverse landscape makes for a stunning helicopter ride.

From high above you’ll take in Rio de Janeiro’s white sand beaches, like Ipanema and Copacabana, the spectacular granite peak of Sugar Loaf Mountain, and, of course, the statue of Christ the Redeemer, the largest Art Deco-style sculpture in the world and a cultural icon of Brazil.