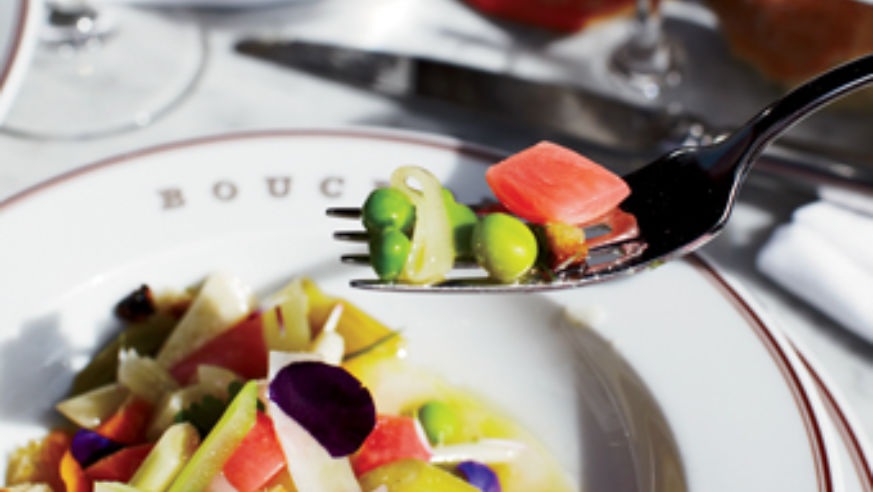 Browsing the results ofZagat's 2013 Top Food In NYC survey is just a bit like strolling down a Manhattan street on a still-warm October evening: You may catch the aromas of garlic, lemongrass, and grilled meats from bustling kitchens, the bouquet of freshly uncorked reds and whites at sidewalk tables—but you ain't got the time or the money to sit down and order a nice dinner for yourself. In a nutshell, New York's best restaurants are mind-blowingly expensive.

Don't get me wrong. I'm a native New Yorker and I'm as proud as the next guy (well, unless the next guy happens to be Eric Ripert) that our restaurants are as innovative, diverse, and uncompromising as the five boroughs themselves. But geez, can a father of two on a magazine editor's salary catch a break?

Well, yeah. As a matter of fact, some of the chefs whose eateries top this year's Zagat survey are enterprising and forward-thinking enough to have launched affordable spinoffs of their restaurants. Not ready, willing, or able to lavish $300+ per person on a single meal any time soon? Check out these tasty NYC alternatives, where the creativity of top chefs is plated daily for a fraction of the flagship prices:

Bouchon Bakery.Thomas Keller's French restaurant Per Se ranked number three on this year's Zagat survey, and it comes with a price tag to match that honor—topping $300 per person. But Keller's awesome Bouchon Bakery, with locations at NYC's Columbus Circle and Rockefeller Center (not to mention Yountville, Calif., Beverly Hills, and the Venetian in Las Vegas) serves up luxurious quiches, delicate croissants, and its namesake bouchons (cork-shaped brownie-like treats), among other peerless baked goods at only slightly higher than average bakery prices.

Bar Boulud. At number four on the Zagat survey, Daniel Boulud's eponymous Daniel serves some of the finest French cuisine in the the city, but you can't really get out of there for less than, say, $140 or so. Meet Bar Boulud, near Lincoln Center for the Peforming Arts on Manhattan's Upper West Side. Offering innovative riffs on corn soup, roasted chicken, and ravioli, this comfortable joint has a prix fixe lunch for $29 and dinner for two for $74.

Spice Market. Alsatian star chef Jean-Georges Vongerichten's Jean-Georges is number six on the Zagat survey, but for those a little antsy about the $150+ price tag, there's Spice Market, a gem in New York's meatpacking district. A $25 prix fixe lunch on weekdays and reasonably priced south Asia-inspired dishes like Thai noodles, vindaloo, and other, yes, spicy favorites allow you to experience Vongerichten's breathtaking imagination at a down-to-earth price.