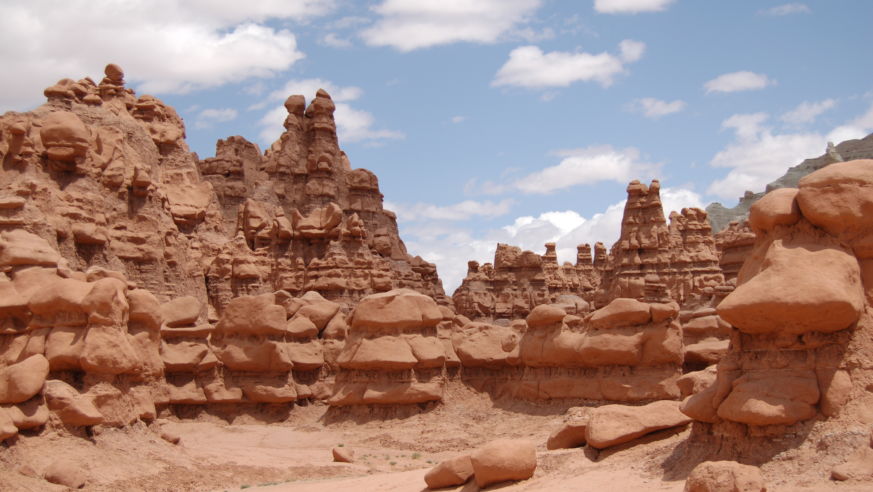 Courtesy of the Utah Office of Tourism

In these bizarre times, it's best to keep an open mind, especially when the government suddenly throws a wrench in your national park vacation plans.

As Budget Travel's Digital Editor, I've been keeping track of how the recent shutdown has affected the travel industry—and it isn't pretty. For starters, more than 800,000 "non-essential" government workers are temporarily out of a job and most, if not all, of the country's National Parks and Monuments have been closed. You're not even allowed to stop on roads that happen to go through National Parks to take a photo. Camping enthusiasts around the country were given a 48-hour grace period to vacate the parks, while others who held reservations for National Park lodges were technically allowed to stay, though not permitted to hike or otherwise enjoy themselves while inside the park. I recently tried to get ahold of my usual media connection for the TSA to see if the shutdown reached as far as the airline industry, but alas, my email to him was returned, as he had, as it turns out, been furloughed as well.

Still, for those seeking take a trip anytime in the forseeable future, all is not lost. In the coming days, prepare to be flexible with your travel plans and check in with the state or county tourism office, local outfitters, and guide services for updates and insider tips on what's currently open and available in the area you wish to visit. Has the shutdown shut down your National Park vacation? Try these alternative State Parks and nearby local attractions instead:

SOUTH DAKOTA
Badlands National Park and Mount Rushmore are both closed at the moment, but that doesn't mean your trip to this part of the country is ruined. Custer State Park is located just an hour's drive south of Mount Rushmore and is one of those places where reaching it is half the fun—there are plenty of twisting mountain roads, gorgeous views, and incredible wildlife encounters to keep you on your toes, and very few places on earth where you can actually get stuck in traffic because a herd of buffalo decided to cross the road, so keep those cameras handy! Once inside the park, opt to spend the night camping in the South Dakota wilderness or visit one of the Custer State Park Resorts—I stayed at The Game State Lodge, a beautiful historic property that once served as the "Summer White House" for President Coolidge in 1927 and was later visited by President Eisenhower in 1953. The best part: it's the launching point for Buffalo Safari Jeep Tours, a spectacularly intimate way to get up close and personal with the park's diverse wildlife—we drove right up to a grazing herd of bison, past fields of noisy prairie dogs, and ended the night with a traditional chuck wagon cookout. Admission to Custer State Park costs $4 per person per day, or pay $15 per vehicle for up to seven days. Children ages 11 and under get in free. Rooms at The Game State Lodge start at $115 a night. Adults pay $82 each—children ages 12 and under pay $62—for the Buffalo Safari Jeep Tour plus Chuck Wagon Cookout. Prices for just the Jeep Safari are $43 for adults, $36 for kids 12 and under. Prices for just the Chuck Wagon Cookout are $47 for adults and $37 for kids 12 and under.

Rather than harp on how you won't be able to get a close up shot of Mount Rushmore, visit nearby Crazy Horse Memorial, soon to the be the world's largest mountain carving, and located about a 30-minute drive southwest of Mount Rushmore, just 10 minutes outside of Custer. Luckily for visitors, Crazy Horse Memorial is privately funded, meaning no matter how bad things get in D.C., it will still stay open. Don't leave without trying the Tatanka Stew at The Laughing Water Restaurant (it's delicious!). Visit the museum to learn more about one of the Sioux's most famous leaders and to view Native American artifacts from around the area. You can even take a $4 bus ride to the foot of the mountain for a closer look at the stone carving, still a privately-run work in progress, or you can make a personal donation of $125 or more per person and get an escorted trip to the top of the mountain carving to meet the famous warrior face to face. Admission is free for Native Americans, military personnel with a valid I.D., uniformed Girl Scouts and Boy Scouts, and residents of Custer County, SD. General admission is $10 per adult or $27 per car; those on motorcycles are charged $5 per rider.

NEW MEXICO
While all 13 National Park Service units in New Mexico—including Carlsbad, Gila, White Sands, Chaco and Bandelier, among others—are currently closed, the bright spot is you can still visit portions of Petroglyph National Monument since the Boca Negra Canyon and Piedras Marcadas Canyon sections are technically owned by the City of Albuquerque. Another good thing about New Mexico: there are several opportunities to explore Pueblo culture on tribal lands. A great day trip from Albuquerque is the Sky City Cultural Center at the Acoma Pueblo, located 60 miles west of the city center, where tours are given daily and you'll get a chance to meet the locals of the longest-inhabited city in the U.S. If you prefer to stay closer to town, take a ride on the scenic Sandia Peak Aerial Tramway for some of the best views in New Mexico, and stop by the Indian Pueblo Cultural Center for a taste of Albuquerque's unique history and culture. Admission to the Sandia Peak Aerial Tramway costs $20 for adults and $17 for seniors over age 62, active military with a valid I.D., and teens ages 13-20; children under age 5 get in free and those between 5-12 pay $12. Admission to the Indian Pueblo Cultural Center is $6 for adults over 18, $5.50 for seniors over age 62, $4 for residents of New Mexico, and $3 for students with a valid I.D. and for children ages 5-17; children under 5 get in free.

HAWAII
Visiting the USS Arizona Memorial at Pearl Harbor is a major bucket list item, and unfortuntely, it's not possible as long as the Congressional craziness continues, however, you can still visit the Battleship Missouri Memorial next door. You'll be able to experience a special complimentary pier-side interpretation of what happened the morning of December 7th, 1941, from the 1,000-foot long pier located a few hundred feet from the closed USS Arizona Memorial. You also have the option to pay admission for access to and tours of the Battleship itself. On nearby Ford Island, the Pacific Aviation Museum gives visitors a look at the way the are was impacted by the attack on Pearl Harbor—you can still see bullet holes in the outer walls of some of Ford Island's buildings if you look closely enough. General admission to the Battleship Missouri Memorial is $22 for adults and $11 for children ages 4-12. Military personnel and Hawaiian residents can obtain special discounts with a valid I.D. Admission to the Pacific Aviation Museum is $20 for adults and $10 for children ages 4-12.