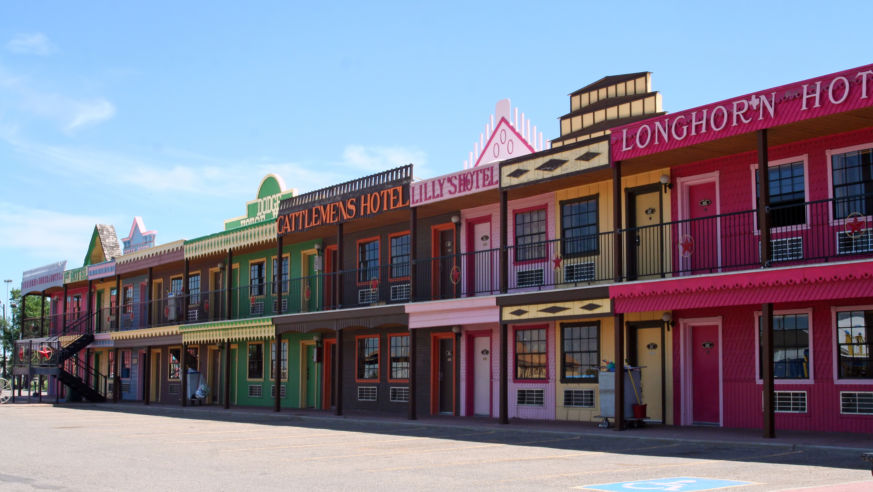 The Big Texan Motel, in Amarillo, looks like Main Street in a cowboy movie.

Welcome to the motel renaissance. Enjoy your stay.

Over the past few years, creative hoteliers have been taking rundown vintage motor lodges and sprucing them up with modern amenities without sacrificing any of the nostalgic charm. Here are a few of America's coolest motels where you can rest your head, retro-style.

Joanne’s Fine Foods, a classic 1950s-style diner, is the Austin Motel’srestaurant, and its throwback vibe captures the overall vibe of the super-hip property. Both fit perfectly into their setting, Austin’s super-hip South Congress neighborhood.

Opened in 1938, the motel underwent a makeover in 2017 and now stands as a tribute to mid-century modern design and style. Each room features retro-esque radios and lamps, plus orange and yellow vinyl accents that complement the ultra-colorful, vibrant wallpaper. But the biggest draw is the kidney-shaped pool, a gathering spot for locals in the warm weather.

Rooms at this Castro district motel are no longer $5 per night, the rate charged when it opened in 1958, but parking is free, which is hard to come by in San Francisco and a big boon for road-trippers passing through. Beck’s Motor Lodge is perhaps the most historic on our list, what with its role in the gay rights scene in the 1960s.

A 2017 makeover added sunburst décor, analog clocks, simple throwback furniture, and other details that enhance mid-century modern vibe. Contemporary amenities like flat-screen televisions were added, too. A few of the 58 rooms have access to the rooftop sundeck, a perfect perch for a timeless San Francisco activity: watching the fog roll by.

Once you know that Sammy Davis Jr and Frank Sinatra hung out here back in the day, you’ll understand how important it was that this Miamihaunt’s snazzy 1950s-era vibe was preserved during a 2014 refurbishment. The works brought the hotel back from the brink of disrepair.

The Vagabond Hotel’s revival is in sync with the design-centric MiMo Historic District in which it’s located. The sleek rooms feature Atomic Era-style geometric stenciling on the walls, groovy vintage lighting fixtures and custom-made furniture with pops of Miami-appropriate pink, turquoise, and muted yellow hues.

Because of the growing number of hipster business that have sprung up over the past few years – breweries, farm-to-table restaurants, artist galleries – Boise has developed a reputation as ‘Little Portland.’ As such, the Modern Hotel & Bar, an expansive low-rise building located about a ten-minute walk from the vibrant downtown, fits right in.

It opened in 2007 in an overhauled Travelodge, an early lackluster motel franchise with all the hallmarks of a classic roadside accommodation, such as rooms that open onto an outdoor corridor. The rooms are decorated with mid-century modern furniture and retro-chic lighting. The stylish, laid-back restaurant/bar features creative dishes and classic cocktails. The most buzzed-about thing, however, is the turntable and collection of ’45s in the lobby bathroom. When the hotel opened, locals lined up to play DJ.

The towering cowboy figure flanking the roadside sign for the Big Texan Steak Ranch in Amarillo is a dead giveaway of the adjacent Big Texas Motel’s kitschy throwback vibe. Not convinced? Just take a look at the motel’s façade, which looks like the set of a Western movie, and the Texas-shaped pool.

Opened in 1960 and located on Route 66, just a few minutes from Rick Husband International Airport, the property’s rooms feature campy touches such as swinging saloon doors, old-timey wooden furniture and animal pelts, all of which add up to a theatrical Old West atmosphere.

But the old-school look of the exterior belies the sleek rooms, which balance subdued minimalism with pop art vibrancy. The creative vibe that’s so characteristic of Portland extends beyond the rooms. The lobby doubles as a gallery for local artists, and the Doug Fir Lounge – a log-cabin-themed restaurant/bar and club next to the motel – features local beer, nightly concerts and a lively patio. If the creativity moves you, doodle your masterpiece on your room’s giant chalkboard before snapping it and tagging it #jupiterhotel.

With its neon sign, blocks of color marking the exterior, and MoonPies and cans of RC Cola on the nightstand, the T-Bird Inn looks like something out of a Doris Day movie. When this downtown Savannahmotel, which sits on the National Register of Historic Places, was built in 1964, it lured travelers – including the Jackson 5 – with its ‘refrigerated’ rooms.

Now, after a 2018 overhaul, it charms with warm popcorn on arrival, retro-chic rooms, full-on green initiatives, and complimentary Krispy Kreme donuts. Also, puppy parents will be happy to know that the hotel features an enclosed dog run and offers doggie bedding and treats.

Retrofitted into a 1960s motor lodge, the Unscripted Durham boasts a giddy mod sensibility with a vintage-style poolside lounge, mid-century modern furniture in the lobby and guestrooms, and wallpaper with colorful geometric patterns throughout.

No modern, high-tech amenities are spared at the expense of a thoughtfully designed vintage look that makes you half-expect Don Draper to stroll through the lobby of this conveniently located downtown Durham property. There’s a smart flat-screen television and Bluetooth sound system in each room and high-tech equipment in the fitness center.

Get more travel inspiration, tips and exclusive offers sent straight to your inbox with Lonely Planet’s weekly newsletter. Make sure you're ready for anything with travel insurance from our trusted partners.