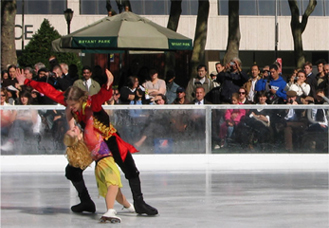 Workers out in midtown yesterday afternoon may have been surprised to find Bryant Park, a popular lunchtime retreat, transformed into a scene recalling Will Ferrell's hit comedy, "Blades of Glory."

Professional skaters were decked out in characteristically sparkly costumes to perform for the grand opening of the Pond at Bryant Park, a small seasonal rink surrounded by trees and gleaming skyscrapers.

First up was a pair of lively ice dancers from the country of Georgia, Isabella Tobias and Otar Japaridze, who zipped and toe-picked to what sounded like Georgian folk music. Sinead and John Kerr, four-time British ice dance champions from Scotland, also drew on their roots. They skated to traditional Scottish melodies—including strains of Auld Lang Syne—while sporting a highly untraditional take on tartan...

Silvia Fontana, who skated for Italy at the 2006 Turin Olympics, chose a power ballad (Christina Aguilera's "Hurt"), as did Michael Weiss, the first American to land a quadruple toe loop in competition ("I could be your hero, baby"). At the Pond, whose ice can be choppy and prone to puddles, Weiss opted instead for two mid-air flips—not quite as life-threatening as Ferrell's Iron Lotus move, but close!

After a number by native New Yorker Kyoko Ina and her partner John Zimmerman, the skating concluded with the crowd-pleasing Haydenettes, a troupe of peppy synchronized skaters who would likely meet the Rockettes' approval.

It was neat to be so close to the performers, many of whom are on the Stars on Ice national tour. You can see shots of them in all their glory by clicking on our slide show.

Beyond the splashy opening ceremony, the Pond wins kudos for being the city's only rink with free admission—skate rentals will set you back $10—and for its lovely setting. As the holidays approach, more than 100 artisans set up festive stalls in the park (Nov. 17-Dec. 30).

The sooner you can take a spin, the better: In mid-January, months before rivals like Rockefeller or Wollman, the Pond closes to make way for the white tents of Fashion Week. 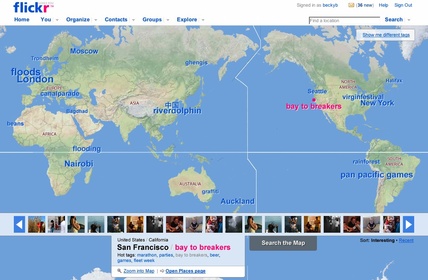 There are many free photo-sharing websites, but Flickr is one of the largest, featuring 2.5 million photos uploaded daily by over 15 million members. For travelers, one on the site's most interesting features is its World Map (www.flickr.com/map). The feature takes advantage of the fact that about 42 million of the photos on its sites have been uploaded with geotags&mdash;labels like "Ghana" or "St. Paul's" that notes the spot where a photo was snapped. The map currently shows pink circles indicating where recent geotagged photos can be seen. In a month or two, the improved world map will allow members to view the popular tag(s) more easily, noting interesting and newsworthy things going on in a specific location at any given time. When members click on any of the tags on the map, they will see a photo stream of popular and current images from that location. Before you plan a trip to a destination, you can get a lay of the land, like so: And after your trip, you can use Flickr to record what you saw for all the world to see. We'll update you when Flickr makes its change. Flickr can help you buy a camera.

Barcelona launched its bicycle borrowing program last March and has just announced that it will increase the number of available bikes from 1,500 to 6,000 by the program's second anniversary. You have to sign up online with a credit card and wait for a registration card to be mailed to you. Since the system posts letters to addresses within the country, your best option is to enter into the website the address of the hotel where you'll be staying. Then notify your hotel so they'll know to look out for it. A spokesperson for Barcelona's program has confirmed that this process should work smoothly for American visitors. Weekly subscriptions are &euro;1, or about $1.40; the first 30 minutes are free. You can cycle for up to two hours at a time. The system is open 24 hours on Fridays and Saturdays, but closes between midnight and 5 a.m. Sundays through Thursdays. More info can be found on bicing.com (in Catalan and Spanish only). Seville recently launched a public bike program with 1,500 bikes parked at 150 stations across the city... The system requires that you subscribe for a week (or year), which you can do at kiosks at every bike stand. (We're looking into whether the machines accept credit cards without a chip in them. Updates on that will be posted within the week.) A downloadable map&mdash;and more details&mdash;are available&mdash;in Spanish only&mdash;at www.sevici.es. A weekly subscription costs &euro;5 (about $7) and the first 30 minutes are free. Note: C&oacute;rdoba also has a free bicycle program but it only involves 35 bikes. EARLIER: Rent a bike in Paris and elsewhere in Europe for nearly nothing. Photo of Barcelona bicycling during sunset one evening this summer, taken by Miguel Yuste via Flickr and Creative Commons. 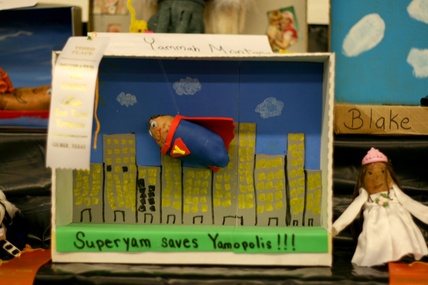 Growing up in Texas, I saw some of the world's most inventive festivals. From the Texas Rose Parade to the much less-enticing Mosquito Festival, my fellow Texans will use any excuse for a party. Last weekend, I returned to my hometown of Gilmer just in time for the East Texas Yamboree, an annual festival that draws over 100,000 visitors to an otherwise tiny town of 5,000 residents. One of the oldest folk festivals in Texas, the Yamboree began as annual celebration of the county's Great Depression cash crop. The affair, celebrated with a fiery hometown pride, has grown to a three-day carnival and pageant. The most amusing event of the festival is the Yam-decorating contest. Yams are painted, bedazzled, and festooned by K-12 students to mimic pop-culture icons, animals, and virtually anything else that can be patterned from a yam. With categories such as yamimals and yam-beings, the contest embraces bad puns. This year's crop included a Superyam (complete with the title "Superyam saves Yamopolis")... No small-town festival is complete without a pageant to crown a monarch. Here, it's the Yam Queen. Local high school senior girls engage in a cutthroat competition for the throne. The winner is the young woman who sells the most festival tickets. Recent winners have raised between $30,000 and $60,000... On pageant day, the contestants wear billowing dresses and perform "swivel, swivel, turn, turn" waves from atop community-decorated floats in the Queen's Parade. Elsewhere, I had an entertaining glimpse into the luxury life of show livestock, witnessing cattle and pigs being coiffed with blow-dryers and meticulously brushed for the judge of the livestock show. Near the livestock tents, the fairgrounds also offered an array of local goods from homemade jams to locally grown fruits and vegetables (including raw sugar cane), not to mention oddball items, such as a marshmallow-shooting gun for $5.&mdash;Liz McKenzie. RELATED: Slide show of wacky festivals EARLIER: Blog readers swap stories of wacky festivals. Learn more at yamboree.com. .Photos by Liz McKenzie, who last blogged here about Air New Zealand.

Picture of the day: Navajo bull-riding

Bull riding at the Navajo Nation Fair on the Navajo Nation. Photo by Randy Allen, picture editor of The Sacramento Bee, from his fabulous portfolio at fotki.com/randypictures. Wanna Be a Travel Photographer? We need readers to shoot not only our cover photo, but photos through the magazine! Show us your skills by posting your best travel images on a photo sharing site such as Flickr or Snapfish, and then send the links to Letters@BudgetTravel.com. You might be one of the several people we plan to send out to photograph stories!