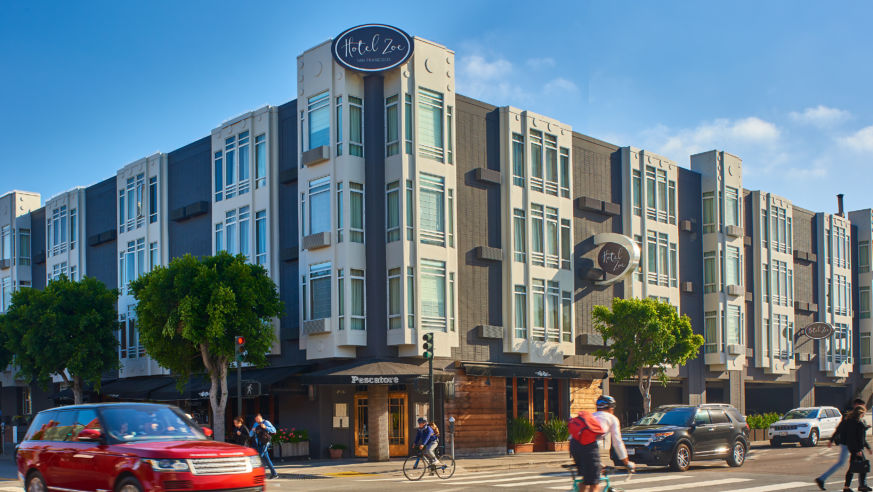 San Francisco is the kind of city that offers such an overwhelming bounty of things to do, eat, drink, and see that you'd almost feel the FOMO start to set in if you spend too much time in your hotel. In the City by the Bay, location is a premium and Hotel Zoe, situated front and center in the Fisherman's Wharf district, delivers just that at a supremely excellent price. Go for the location, stay for the way this locally-minded hotel offers a distinctly local experience.

Given its waterside locale, It makes sense that the $17 million renovations that were completed in 2017 transformed what opened as a Best Western in the early 1990s into a nautical-themed haven. Its tasteful subtlety gives the space a luxurious yet casual feel. Browns, blues, and cream colors infuse the lobby with an oceanic feel, the couches, chairs and table resemble classic nautical furniture designs, and decorative touches evoke undulating waves. It's a conceptual extension of the mesmerizing bay just outside.

That nautical theme extends to each of the 221 rooms, but still only subtly. The desk chairs, for instance, resemble captain's chair. Otherwise it's all stark minimalism, brown and grey tones, blonde wood, and rounded edges, calling to mind a yacht's cabins. Except for one thing: this being San Francisco, and all, there are delightful technological accents. The rooms, which range from single queen to double queen to single king, are equipped with Cubie radios, which can charge four gadgets at once, complimentary high-speed wifi, and streaming capabilities for Netflix and Hulu. All the rooms without a city view feature an interior courtyard. It's also worth noting that the hotel is right in sync with the eco-mindedness that pervades this city, opting for giant bottles that dispense shampoo and conditioner instead of small disposable sizes. The local love is also evident in the mini fridge, which features Sierra Nevada and San Francisco's own Anchor Steam beers and Simi Cabernet.

If central location is your top priority, this is your spot. Lombard Street, the notoriously steep and twisty road, is a quick walk away, as is the other waterfront attractions, like the Buena Vista, known the world round as the bar that created Irish coffee, Also in walking distance is the city's epic Chinatown, North Beach, which is chill during the day but livens up at night, and the Embarcadero, the scenic three-mile thoroughfare that runs along the water and ends at the famed circa-1898 Ferry Building.

Pescatore is the hotel's restaurant, an Italian affair that's sophisticated yet laid-back, with huge windows overlooking the street, patio seating, and dark wood and tiled accents. The's a wood-fired oven, but the menu is far more than just gourmet pizzas. Charcuterie, local seafood, and homemade pastas are just a few other options. Breakfast and lunch are also offered here. The hotel's chill lobby becomes a bit more buzzy around 4PM each day, when Bar Zoe opens across from the front desk and the cocktails start flowing, imbuing the space with a lounge-y vibe.

There are quite a few added bonuses offered to guests, like a complimentary glass of wine upon arrival and free bike rentals. Helmets are available upon demand. An outdoor seating space off the lobby in an inner courtyard features firepits that invite extended sessions of loitering before hitting the town.