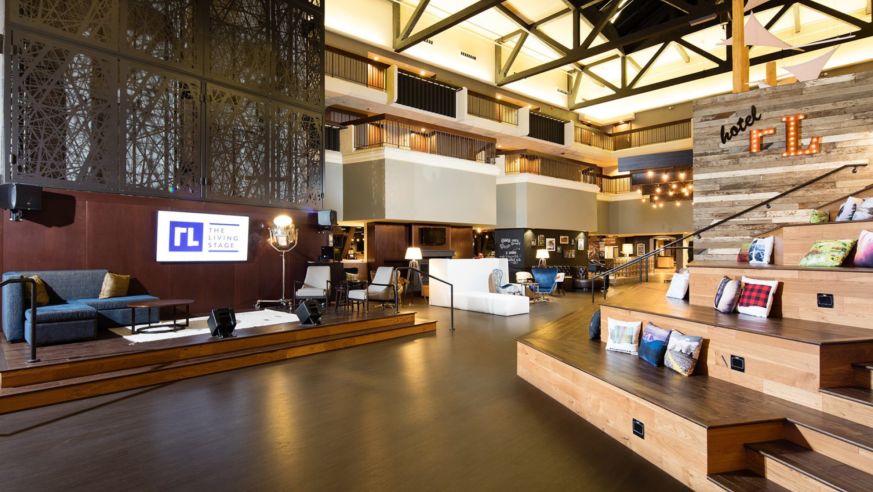 It’s probably the best worst-kept secret in Hollywood—and the music industry, too: overhaul your look and people will notice you all over again. Some might even say that an image makeover generates more attention than a flawless performance. It seems that the RLH Corporation is borrowing a page from show business’s playbook—in more ways than one, in fact--with the introduction of Hotel RL, a hipper and edgier take on the familiar hotel chain. The first of these slick new boutique hotels opened in Baltimore last year and other ones have since popped up in Brooklyn, Spokane, Salt Lake City, Omaha, and more. Designed with a mind towards community and socializing, each hotel’s airy, colorful lobby has a performance stage (more on that in a second) and food and coffee purveyors.

As far as Bill Linehan, CMO of the RLH Corporation who helped design the concept, sees it, this is where boutique hotels haven’t dared go before.

“Boutique hotels are increasingly prevalent and, more and more, that means a focus on design, high-design. I don’t think that’s necessarily the millennial mindset,” he said. “As a company, we’re focused on being conversation-friendly and more relevant. There’s a creative mindset that exists within the millennial population, so it's important to come up with a lobby concept that’s different.”

The result? The Living Stage, which gives the hotel lobby not just a chill, artsy coffee house vibe, but a connection to the local community.  The performance space hosts musicians, speakers, artists, and a variety of other creative types, each from the resident city. And it’s not just about entertainment. In Omaha, a mayoral candidate held his election night event at the city's Living Stage. There was a Black Lives Matter event at Hotel RL Baltimore Inner Harbor. And TED Talks-style events happen all around. Each hotel provides its Living Stage schedule in each guestroom.

“With technology these days, all you need to do is walk up to the front desk and summon someone who’ll look up and give you the key,” said Linehan. "We want to make the lobby more activated and energetic, more of an authentic place than a space where you stand in line to get a key."

READ: "Oops! How Not to Embarrass Yourself in a Foreign Country"

But that’s not all. Each Hotel RL showcases its own local installment of Project Wake Up Call, which features local photographers’ shots of the city, and not always the glamorous aspects. In fact, part of the goal of the Project is to bring attention to each area’s homeless blight. Photographs are auctioned off and donated to each hotel’s chosen local charity.

"Hotels have very much have lost their way on being part of the community,” said Linehan. “There are just so many opportunities for locals to project their creativity as well as advocacy, awareness, and innovation. We want to be a community’s stage.”