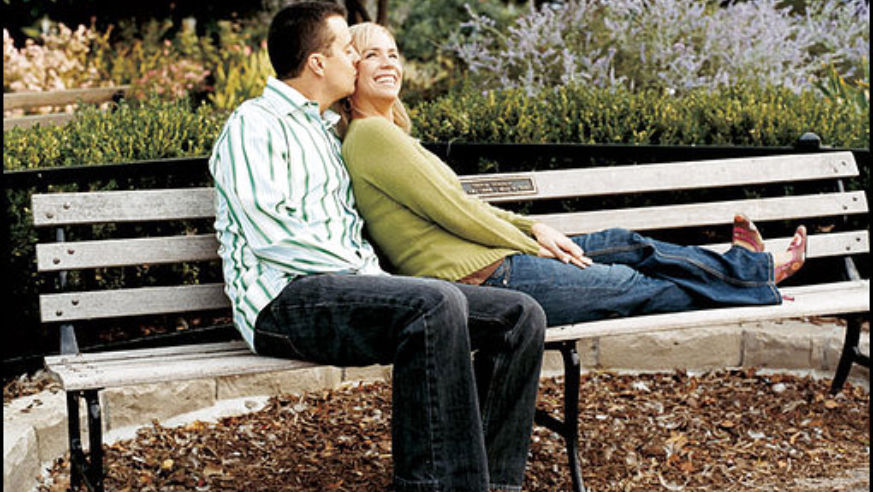 Anna Knott
The McCarthys in Chicago. Sean tricked Katie into posing by saying he was giving her a special picture frame

Sean McCarthy met Katie Hellmann in third grade, when she was the new kid at school in Newburgh, Indiana. They went to a dance together in seventh grade, but at the end of the school year Sean's family moved to North Carolina. They wrote to each other through the years, and one letter from Katie prompted Sean to drive overnight to rekindle the romance 10 years after their first go of it. "I still have that letter," says Sean. Married in 2004, the McCarthys live in Chicago, where Sean works in sales for T-Mobile and Katie runs her own event-planning business.

Sean is surprising Katie for her 30th birthday with a trip to a place she's always dreamed of: New York City. Neither has ever been there. "She keeps mentioning how much she'd like to go to New York," says Sean. "I pretend that I don't hear her."

But the fact is, Sean is a very good listener. And he plans to indulge Katie in every way--dining at her favorite kinds of restaurants, drinking colorful cocktails, shopping at boutiques. "This trip is about her," he says. "I just want to do what she wants to do."

The first challenge is pinning down the perfect hotel. Sean knows Katie will want a place with some style. "I'd rather not be in a shady area just because it's cheaper," he says. The McCarthys will spend much of their time downtown, an area not known for a good hotel selection. Reliable favorites include the Abingdon Guest House in the West Village, the Gershwin Hotel in the Flatiron, and Park South Hotel in Gramercy. The first two are full for the November weekend Sean had picked, so he's relieved when the Park South has a room. The hotel occupies a beautiful eight-story building that dates to 1906.

"Authentic New York is much more appealing than what's on TV," explains Sean. Still, he asked us to brief him on major attractions that'll be convenient, so they have the option of checking them out. Their hotel is a few blocks from the Empire State Building, and they can easily start there first thing in the morning (it opens at 8 a.m., the ride up is $14, and crowds get larger later in the day). "If it's doable, Fifth Avenue might be fun," says Sean. All they have to do is take the 6 train uptown to 51st Street for browsing at Tiffany's and other ritzy shops, before detouring into Central Park for a nice walk.

But Sean knows that with only a few days in the city, they won't focus on tourist sites. "We can always come back for those," he says. They prefer to experience New York like real New Yorkers. The best way to do that is by hitting the streets and walking, eating, and (a personal favorite for Katie) shopping. "I assume she'll want to go to smaller shops that can't be found in other places," says Sean. "The more eclectic boutiques." NoLita, a hip neighborhood east of SoHo--and as the abbreviation indicates, north of Little Italy--should be the first stop. Hollywould, a little shoe store on Elizabeth Street, is a favorite for girls who can never have too many sparkly heels. Around the corner on Prince Street, INA is where New York's fashionistas put their designer bags, dresses, and jeans on consignment.

As part of her business, Katie creates invitations, and in SoHo she can indulge her paper obsessions at IS, a stationery store favored by graphic designers. She'll also love Kate's Paperie, which has tons of invitations and beautiful paper products. An informal paper district, on 18th Street between Fifth and Sixth avenues, includes the well-stocked Paper Presentation.

No neighborhood is better suited for wandering--if only because its layout often gets people lost--than the West Village. The streets are lined with brownstones, shops, and cafés. (As a fan of Sex and the City, Katie should keep an eye out for Sarah Jessica Parker, who's often spotted on Waverly Place.) In particular, Bleecker Street, west of Seventh Avenue, has become a newer, smaller version of NoLita. The Marc Jacobs trio of stores--his, hers, and accessories--was the pioneer, and now there's a series of high-end boutiques. Sean is happy that most of the stores have chairs. "I'll just bring a magazine and nestle in," he says gamely.

The McCarthys are interested in neighborhood restaurants. Two excellent possibilities in the Village: Mario Batali's informal pizzeria, Otto, which fills up fast on weekends for dinner. The restaurant just started taking reservations, but if the couple has to wait for 20 minutes or so, it isn't all that bad. They can have a drink in the bar, and a train timetable signals when tables open up. Also, the cozy Italian restaurant 'Ino is great for grilled panini.

"There's not much we don't eat," says Sean. For lunch, Sean and Katie might test their palates at Freemans, down an unassuming alley on the Lower East Side. A hunting-lodge aesthetic carries through in the menu (wild boar terrine?), but there are more approachable dishes, like the smoked trout with hard-boiled egg ($9).

The McCarthys host an annual martini party they jokingly call the Partini. "I'm a big fan of traditional martinis," says Sean. "Katie likes anything in a martini glass." There's a boom in Manhattan of classic cocktail lounges. At the Pegu Club, one of the newer entries, drinks are about $12 each, but the experience isn't one they'll find anywhere else. Each cocktail comes with a quartet of droppers, which allow patrons to perfectly calibrate their drink to taste. Katie might opt for the Pegu Club Cocktail: orange Curacao, bitters, London dry gin, and lime juice, served in a martini glass.

As far as nightlife, Sean and Katie--who watch Saturday Night Live and Comedy Central regularly--will find some of the city's best comedy and wacky theater at the Upright Citizens Brigade. SNL cast-member Amy Poehler is a founder and a regular at the club, located in Chelsea.

Laughs are great, but romance is what the McCarthys' getaway is about. Even jaded New Yorkers find walking across the Brooklyn Bridge magical. If the weather cooperates (a bit iffy in November), the couple will begin the dramatic 40-minute stroll at City Hall. The view of the Manhattan skyline is its own reward, but there are other reasons to make the trek. Many people say the city's best pizza is in Brooklyn, under the bridge's shadow at classic coal-oven joint Grimaldi's, and for dessert, Jacques Torres Chocolate is unforgettable. (Sean and Katie can take the A or C train back to Manhattan if they've had it with walking.)

Finally, Landmarc, a rustic American restaurant in Tribeca, is the perfect spot to celebrate Katie's birthday. It's understated but special, and the wine list has an unusually low markup: While the standard at city restaurants is 300 percent, Landmarc charges the retail price for many bottles. A grill in the back of the dining room sears five cuts of steaks, which come with five options for sauces. Landmarc doesn't take reservations for parties under six, but Katie and Sean can give the host their cell phone number and head a few blocks north to the Brandy Library, which, on top of its 300 brandies and 240 single malts, has a long list of cocktails. The Perfect Manhattan comes--naturally--in a martini glass.

The nice folks at the Broadway comedy hit The 25th Annual Putnam County Spelling Bee are giving Katie and Sean free seats to a performance. Also, thanks to Comedy Central, the couple will skip the lines with VIP tickets for a live taping of The Daily Show. Now all Sean has to worry about is his wife's crush on host Jon Stewart. "I think she finds him easy on the eyes," he says.

"In a word, Ireland was fantastic," says Kurtis Frank, shown here with his wife, Heather, at the Cliffs of Moher. The couple, who we coached in May, made a lot of readers jealous by scoring tickets to see U2 in Dublin. "The show was amazing from start to finish. Thanks so much."