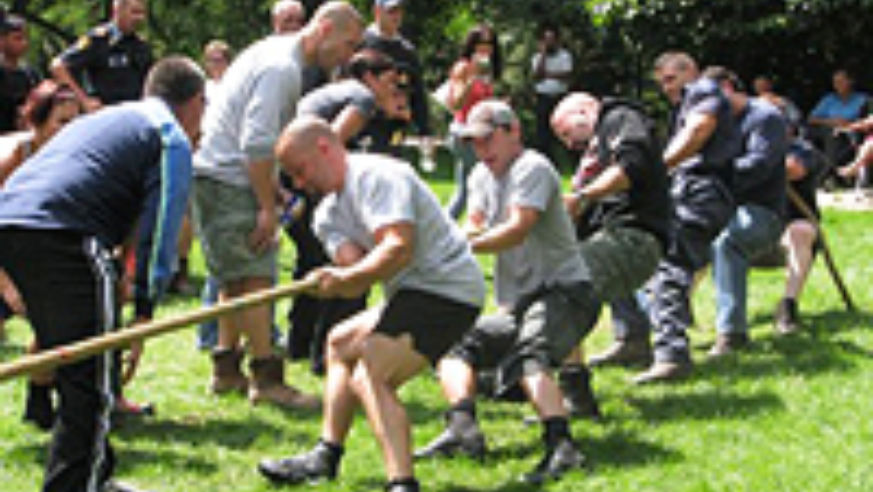 Starting this weekend, 750-plus of the world's most fearless police officers and firefighters will gather in Dublin, Ohio, a northwestern suburb of Columbus, to duke it out in the 2010 Can-Am Police-Fire Games. The international Olympics-style competition, held every two years, pits public safety personnel against one another in 58 sporting contests to promote fitness and camaraderie. This year's event, which runs August 15 to 22, will host competitors from 38 different states and provinces and nine countries.

Why you should go: All the events are free and open to the public, and include the grueling, can't-take-your-eyes-away Toughest Firefighter Alive and Toughest Competitor Alive multievent contests, the amazing and widely entertaining K9 service dog competition, and the classic crowd-pleaser, tug-of-war. The Games kick off on Sunday with the Opening Ceremonies from 4:30 p.m. to 9 p.m. in Dublin's Coffman Park, complete with bagpipe music, a color guard, and welcoming remarks from Dublin's mayor. Activities include inflatables for kids, a concert by oldies band Phil Dirt and the Dozers, a K9 demonstration, and all kinds of emergency vehicles—including helicopters—on display, plus food and drink.

And after the week of sporting events, closing out the final night of activities is the Badge Bash on Saturday, August 21, at 4 p.m., with food, beverages, entertainment, and raffles in Coffman Park. The event isn't free, but the $10 admission fee supports local police/fire charity Get Behind the Badge (ages 17 and under get in free). Live music includes several pipes and drum bands (make sure you're there at 8:30, when all the bands will get on stage and play together—about 50 bagpipes at once!), and then rock-and-roll cover band Tazer will take over from 10 p.m. to 1 a.m. (fittingly enough, one of the raffle prizes is a civilian taser).

Various Dublin hotels are offering special rates for the Can-Am Police-Fire Games. For more information about what to do in Dublin, visit the city's convention and visitors bureau website.