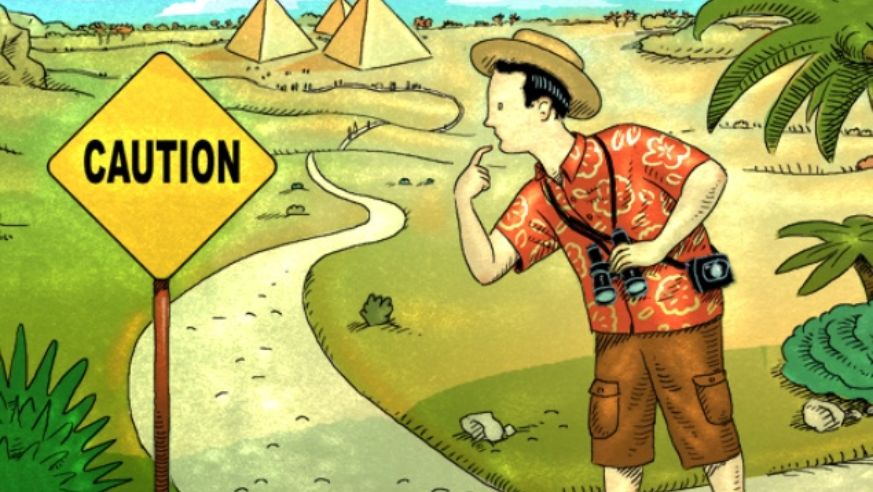 Mexico, Egypt, Greece…we took a look at some of the most "challenged" destinations to help you determine where the benefits outweigh the risks for travel in the New Year.

To go or not to go…that is the question, indeed, if you're savvy enough to know that places that make headlines for the wrong reasons—natural disasters, political unrest, problems with a nuclear power plant—can also become travel bargains. We help you weigh the pros and the cons to determine when to cash in on that discount, and when to wait.

Kidnapping, carjacking, extortion, gang wars—it's not news that Mexico has had issues. In April, the U.S.  Department of State warned Americans against traveling to the states of Tamaulipas and Michoacán, plus parts of the states of Sonora, Chihuahua, Coahuila, Sinaloa, Durango, Zacatecas, San Luis Potosi, and Jalisco. This year, there were nearly 900 gang-related killings in the Pacific resort town of Acapulco—but this is considered a major exception. Most tourist-popular areas, such as Mexico City and the resorts of the Riviera Maya, are considered safe for travelers. (In fact, statistics show that these regions saw even less crime in 2010, per capita, than Orlando and Washington, D.C.) Mexico's government is increasing military security at new government checkpoints, especially in border areas, and its tourist board is fighting all the negative press by flying U.S. travel agents to Cancún to see for themselves that the sandy white beaches in tourist areas remain perfectly calm—except for when the spring-breakers roll into town, of course.
To Go or Not to Go?Go—but only to destinations approved by the U.S. Department of State.

In March 2011, a 9-magnitude earthquake—the strongest ever recorded on the island—caused massive destruction in Japan. The ensuing tsunami that slammed the northeast coast claimed thousands of lives; the massive meltdown at Fukushima Daiichi nuclear plant has caused ongoing problems, as significant radiation has been released into nearby areas. Naturally, the tourism industry was hit hard, too. According to Mat Eccles of InsideJapan Tours, plenty of tourists canceled their trips to Japan after the disaster, but "many chose to take advantage of our offer to postpone their trips, to give Japan time to get back on its feet and recover. Almost all of those clients have now reorganized their trips." Though he confirms that tourism to Japan has been down, he's already seeing an upswing. "Over the past three to four months, the level of inquiries and bookings has been picking up significantly," Eccles says. "I've recently booked trips from the wilds of the northern island of Hokkaido to the primeval forests of Yakushima Island, and everything in between."
To Go or Not to Go?Go—just nowhere within50 miles of the Fukushima Daiichi plant in the north (the popular cities of Tokyo, Kyoto, and Osaka are all fine).

An 8.8-magnitude earthquake, said to be the sixth strongest on record in the world's history, rocked central Chile in February 2010. Thanks to the South American nation's sophisticated infrastructure and strict building codes, the damage was somewhat mitigated: Though 1.5 million people were displaced, casualties measured in the hundreds, not thousands. Damage to the international airport caused flight cancellations at first, and the U.S. Department of State initially warned Americans to avoid nonessential travel to the region. But the tourist industry quickly recovered. While Eduardo Doerr of Protours Chile noted that, due to damage to country estates in the wine country of central Chile, some of Protours' itineraries had been temporarily altered, he added that "the earthquake did not affect any of our most-visited areas, so we were able to recover very quickly."
To Go or Not to Go?Go.

Starting with Arab uprisings against then president Hosni Mubarak in January and continuing on to Christian protests when the military attacked a church in Cairo in October (the bloody conflict left at least 25 dead and hundreds injured), 2011 has been tumultuous in Egypt. Though Mubarak, the nation's longtime president, stepped down during a storm of popular protests in January and February, a revolution is still in full swing. The U.S. Department of State isn't currently releasing an official warning against travel to the region, but they've issued a travel alert cautioning travelers to steer clear of protests likely to take place during a series of parliamentary elections that will continue through March. Understandably, tourist numbers, which initially plummeted by 80 percent, are overall down by a third this year—not that the Egyptian tourist industry plans to take the news sitting down. In an unprecedented bid for the tourist dollar, the minister of tourism announced in November that the Lower Nile would reopen to river cruises for the first time in 16 years.
To Go or Not to Go?Wait.

The 6.3-magnitude earthquake that shook Christchurch, New Zealand, in February 2011 claimed nearly 200 lives. Ten months later, another quake hit on December 16. The city has suffered serious damage, with blocked streets, collapsed apartment buildings, and structural damage to its famous cathedrals—the tallest building, the Hotel Grand Chancellor Christchurch, is currently being demolished after being declared unstable. Jo McDermott and John Carter of Discovery Travel say, "Tourism has definitely dropped; we stopped operations for a short time after the February earthquake. At the moment, none of the major hotels are operational. We would definitely encourage people to travel to Christchurch and Canterbury, but be aware that accommodations will probably not be in the center." Jodee Merito of Pacific Travel, another local tour operator, adds, "We appreciate people may still be apprehensive, but we welcome tourists to continue using Christchurch as a gateway to the rest of South Island."
To Go or Not to Go?Go, but only to pass through Christchurch on your way to other parts of New Zealand.

The Greek economy may be in big trouble, but you wouldn't know it by looking at the record number of tourists swarming the ancient monuments and beaches in 2011. The Association of Greek Tourism Enterprises reports that numbers are up 12 percent from last year. As Culture and Tourism Minister Pavlos Geroulanos told The New York Times, "Without a doubt, tourism has already helped soften the blow of the economic crisis." But recent riots and strikes in Athens might make prospective travelers think twice—after the October riots, 74 protesters and 32 police officers were hospitalized, flights were grounded, and public transportation around the capital was shut down.
To Go or Not to Go?Go, but stick to the islands and tread lightly in Athens.

In November, floodwaters swept through Thailand, claiming hundreds of lives and inundating vast stretches of farmland. Many tourists largely cleared out of Bangkok, while others are simply staying away; airlines like Cathay Pacific and Singapore Airlines have been forced to cut some of their flights. It's possible to see the major sights—the city center remains unaffected—but many countries, including the U.S., had issued travel alerts. The Sydney Morning Herald quoted Piyasvasti Amranand, president of Thai Airways, as saying: "Passengers are down a lot. No one wants to come to Thailand [when] travel warnings [are issued]." However, by mid-December, the U.S. State Department canceled both of its alerts.
To Go or Not to Go?Go. Visit Phuket or the beaches, but still use caution when navigating Bangkok.

The coast is not clear for surfers and divers along Australia's western coast. Since August 2010, four people have been killed by great white sharks that are attracted to the area's seal colonies. One recent victim was George Thomas Wainwright, a 32-year-old Texas resident who was attacked by a shark while scuba diving near popular Rottnest Island. But consider the numbers in perspective: According to Surf Life Saving Australia, during the past five decades, only one person has been killed on average each year by a shark while 87 swimmers have drowned off Australian beaches. Still, Fisheries Minister Norman Moore says $2.05 million (Australian dollars) will go toward establishing a "Shark Response Unit," and another nearly $2 million will be devoted to more helicopters and beach patrols.
To Go or Not to Go?Go.

As one of the world's poorest countries, Haiti has never been a major tourist spot—most foreign visitors only see it on a side trip from the neighboring Dominican Republic. A devastating 7-magnitude earthquake in January 2010 dealt the nation another blow, claiming more than 300,000 lives, demolishing Port-au-Prince, and costing the impoverished nation a staggering $8 billion to $14 billion. The U.S. Department of State issued atravel warningin August to strongly discourage U.S. citizens from entering the country on their own, urging citizens to consider carefully all travel to Haiti, citing crime, armed robbery, and kidnapping.
To Go or Not to Go?Don't go.

Officially, Libya was declared liberated in October after Colonel Muammar Kaddafi was captured and killed. But the civil war and its aftermath have effectively destroyed the North African nation's tourism potential, at least for the time being. Amelia Stewart, director of Simoon Travel, says, "I'm hoping to go out on a [reconnaissance trip] to Libya in the New Year.... All my colleagues and friends are OK, although [they've] been displaced and are still trying to get back to some kind of normality given that most of them are based in Misrata. [Everyone is] keen to start working again, and it's purely politics and infrastructure that are stalling them at the moment. Tourist visas are not being issued at present, nor are there direct flights from the U.K., so I think it will be some time before tourism starts up again—the tourism industry is saying autumn 2012, although I think this is optimistic." A spokesperson for Temehu Tourism Services added, "Libyans are focused on getting back on their feet. Tour operators and all other sectors of the infrastructure should do all they could to help Libya in times of need. Work must go on." The U.S. Department of State has issued a travel warning against nonessential trips to this deeply afflicted region.
To Go or Not to Go?Don't go.

Unemployment, rampant inflation, censorship, a heavy-handed government…these are trying times in Tunisia. Though President Zine al-Abidine Ben Ali was ousted in January—after the high-profile death of street vendor Mohamed Bouazizi, who set himself on fire in protest—political and social unrest continue. But the U.S. Department of State has only issued a travel alert, not a travel warning, to American citizens. Though the tourist industry suffered in the first half of 2011, Tunisia's interim government urged hoteliers to maintain their usual price structure—and, according to Peter Kirk of tour operator Tunisia First, the industry is rebounding. Kirk says that Tunisia has always been a good value destination, and it certainly helps that for the past few years, Tunisia has been successfully marketed in the U.K. as an easy and economical getaway. Of the English contingent, Kirk says, "our level of business returned to normal starting in July." American travelers may not be far behind, as long as they don't mind paying full price for excursions and hotel rooms. According to Kirk, a full-day excursion to Tunis, Carthage, and Sidi Bou Said including lunch is around $55.
To Go or Not to Go?Go, but be careful.