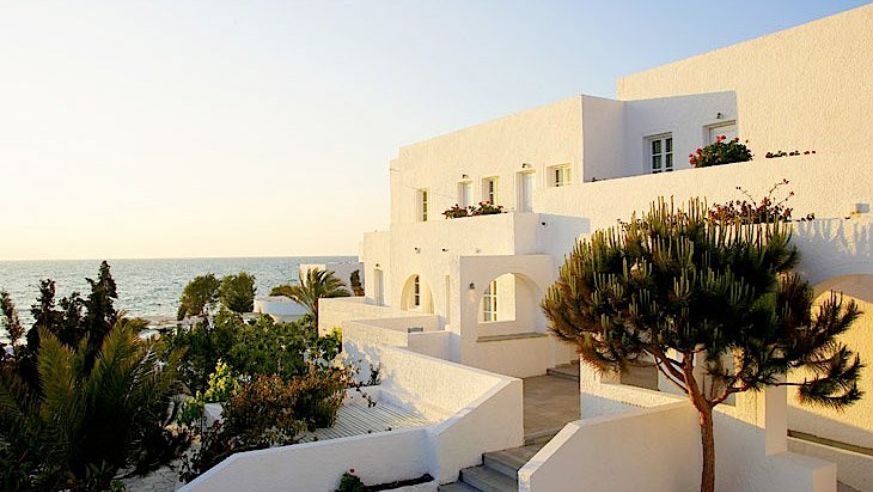 BT's summer-getaway challenge: to find 10 properties where you can go from your bed to the beach in five minutes or less—for under $150 per night.

Memories from your beach vacation should involve the breeze in your hair and the sand in your toes—not the bill at the front desk. Our challenge? To find 10 getaways under $150 that are less than a five-minute walk to the ocean's edge—a tall order for summer's peak season, when the average price of a waterfront hotel starts around $250 per night. We steered clear of the Caribbean (hurricanes) and Southeast Asia (monsoons) to focus only on the most desirable summer destinations in places that don't strand you in the middle of nowhere (unless that's the point). The resulting collection of hotels and resorts, from the family-friendly mainstay of Myrtle Beach to Barcelona's sizzling shoreline, proves that wherever you want to go this summer, you can be right on the shore without breaking the bank.

Retro-glam rooms next to turquoise waters.
Near the top of the arc that forms the Florida Keys sits Key Largo, long celebrated for its glamorous watering holes and unspoiled beaches. In 1948, Humphrey Bogart and Lauren Bacall shone a spotlight on the town with a film of the same name. Today, about 200 feet away from where the stars cracked wise at the Caribbean Club, stands Azul del Mar. Thanks to husband-and-wife proprietors Karol and Dominic Marsden, the eight-year-old hotel evokes the island's heyday. Facing Blackwater Sound and Florida Bay, guest rooms feature round porthole windows, faux Ionic columns, and colorful accents throughout. Lounge on the lawn amid tropical trees, key-lime bushes, and frangipani, or oceanside on the private, man-made shale beach. The hotel can also arrange excursions, including sunset cruises, snorkeling adventures, and fishing trips (if you'd like, you can choose to bring back your catch and cook it on Azul's grill). 104300 Overseas Hwy., 305/451-0337, azulkeylargo.com, from $139.
MAP IT!

The scenic Pacific Coast and classic American attractions.
Finding affordable waterfront digs in coastal California can be a daunting task—which makes this spot right on the beach such a pleasant surprise. Here, you're also adjacent to the 18-mile-long Monterey Bay Coastal Recreation Trail, which leads right to theMonterey Bay Aquarium, San Carlos beach (popular with divers), and Fisherman's Wharf. This is a "Best Western Plus" (as opposed to a straightforward "Best Western"), which means perks like free Wi-Fi. The 196 rooms are painted in sweet, muted tones of cream with cranberry accents and are furnished simply with wicker furniture. Floor-to-ceiling windows maximize the star attraction—the view of Monterey Bay. The restaurant prepares local seafood, such as clams and sand dabs, to order. 2600 Sand Dunes Dr., 831/394-3321, montereybeachresort.com, from $150.
MAP IT!

A water-park resort near America's newest boardwalk.
This summer, the year-old Myrtle Beach boardwalk has added a 187-foot-tall Ferris wheel to its already long list of attractions (cafes, street performers, fireworks displays). Just 16 blocks north is a stretch of beach that's sugary white, with shallow waters and low waves that are perfect for beginning swimmers. The Caribbean Resort & Villas is strung along the shore, with 438 rooms and suites spread across four beachfront buildings: the Cayman and the Dominican Towers, the Chelsea House Villas, and the Jamaican Motor Inn—which is where you can still find mid-summer bargains. (Bonus: Guests here have access to the inn's own pool and beach deck.) The Cayman and Dominican Towers are both geared toward families with small children—they have indoor and outdoor tubing pools, a lazy river, and hot tubs, plus an outdoor waterslide area on the north side of Cayman. The hotel is also popular with duffers, given that the town has 115 golf courses, including stately Pine Lakes (tee times from $79 if you book online). 3000 N. Ocean Blvd., 800/552-8509, caribbeanresort.com, from $125.
MAP IT!

A second act for America's iconic boardwalk town.
The Chelsea lit up its retro neon sign in July 2008 along the southern end of Atlantic City's salt-and-pepper shoreline. With a distinctly Rat Pack vibe, the Chelsea channels the easy glamour of a bygone era with its poolside cabanas, fireplace lounges, and in-house supper club, the Chelsea Prime, which serves classics like duck ragout and homemade pappardelle. Each of the 331 rooms and suites has boutique touches, like parrot-shaped white lamps, blue velvet curtains, and upscale FACE Stockholm toiletries, and the hotel's expansive spa includes a seasonally heated saltwater pool. All guests have access to the Cabana Club, a 15,000-square-foot deck on the fifth floor, whose outdoor swimming pool and indoor lounge provide ocean views. The hotel itself is free of game tables, but if you are in need of some action, the Tropicana casino resort is just a block away. 111 S. Chelsea Ave., 800/548-3030, thechelsea-ac.com, from $129; valet parking from $10 daily.
MAP IT!

Artful casitas at a diver's paradise.
Though it's only about 60 miles northeast from the well-known resort community of Cabo San Lucas, the village of Cabo Pulmo has a rustic vibe that makes it feel a world away.A two-minute walk down a sandy path from the town's beach brings you to El Encanto de Cabo Pulmo, an inn comprised of three private suiteswith palm-thatch roofs, rattan chairs, vintage Oriental carpets, and Mexican artwork. Opened in 2008, the solar-powered inn is hemmed by bountiful gardens designed and maintained by owners Robert Lerner and Diane Varney, who, now retired, both hold graduate degrees in botany. Set inside the eponymous national park, the town of about 100 residents has long been a haven for divers seeking out rare living coral reefs in some of the world's clearest waters. At night, the skies are nearly free of ambient electric light, presenting spectacularly clear views of constellations. Take in the view from your private patio before settling into your four-poster bed. Lot 5, Phase II, Cabo Pulmo Beach Resort,619/618-1248, encantopulmo.com, from $90, three-night-minimum stay.
MAP IT!

The beach-vacation trifecta—culture, cuisine, and coastline.
Barcelona has it all, so why not drop your bags at the beach to ensure your downtime here is well spent? Across the street from La Nova Mar Bella Beach—where you can rent sun beds and umbrellas and stroll the boardwalk—the four-star Hotel Front Marítim's 177 earth-toned guest rooms feel like they could have come straight out of an Ikea catalogue, with clean lines, big windows, and parquet floors. A night in means dining on Mediterranean cuisine such as grilled tuna topped with tomato and fried fillet of monkfish served with crisped garlic (a Catalonian specialty) at the house restaurant, Forum, which changes its menu weekly. The nearby metro will get you into the heart of the city in 20 minutes. Paseo García Faria, 69, 011-34/933-034-440, hotelfrontmaritim.com, from $129.
MAP IT!

An affordable corner of the French Riviera.
On the bright blue Bay of Garavan, about a 10-minute walk from the center of town, this chic retreat is just across the street from the beach—and less than a mile from the Italian border. (You can jog there on your morning run.) The 44-room hotel features light colors, airy rooms, and soft, square armchairs in the lounge, which is right next to a small pool. It's worth spending extra for a room facing the sea—you'll be rewarded with a great view and a wooden balcony with a table and chairs. A road lines the entire seafront of Menton, but once the double-paned windows are closed, the whoosh of traffic is gone. Breakfast is served on the downstairs patio, under the banana trees. For the true Riviera experience, rent a lounge chair and umbrella (about $18 per day) on the private beach and have a waiter from the beach restaurant bring you a drink. The hotel even has its own ice cream parlor next to the beach. 29 Porte de France, 011-33/4-93-35-89-50, napoleon-menton.com, doubles from $149.
MAP IT!

A waterfront escape in one of the world's most diverse ecosystems.
Vancouver Island is a nature-enthusiast's paradise. Not only is the region one of the best places in the world for birding and whale-watching, but it's also comprised of a surprising number of ecosystems, including rain forest, mountains, and beaches. The Pacific Shores Resort & Spa makes it easy to take full advantage of the location, with a beach and 15 acres of nature trails and botanic gardens right outside your doorstep. Head out on your own or let guest services point you to one of the hotel's popular nature walks (if you want to head off-site, they can recommend full- or half-day forest hikes, wine tours, or boat trips). The 64 suites all have balconies, and select rooms also feature fireplaces, washer/dryers, and Jacuzzi tubs. There is a spa on the property, and families will appreciate the playground, kid-friendly pools, and barbecues. 1-1600 Stroulger Rd., 866/468-7121, pacific-shores.com, from $119.
MAP IT!

Surfer chic and BBQ on a quiet coastline.
Not to be confused with St. Petersburg, six-mile-long St. Pete Beach is an island off the coast of Florida. With flour-fine white sand and shallow Gulf of Mexico waters, the coastline is graced with mellow swells that are excellent for beginner surfers learning to ride. When Stephen Hanson upgraded a 1950s motel into the Postcard Inn in 2009, he played off the local surf vibe: The 196 rooms feature a mix of vintage longboards, surfing-themed photo murals, retro light fixtures, and flea market finds, ensuring that no two are alike. As if the ocean weren't enough, the hotel has a beachfront pool, shady courtyard, and shuffleboard and volleyball courts. The Beachwood BBQ & Burger restaurant is notable for the gourmet spin it puts on grilled comfort food, with specials like smoked chicken glazed with apricot barbecue sauce and sprinkled with pickled jalapeños. 6300 Gulf Blvd., 800/237-8918, postcardinn.com, from $89.
MAP IT!

Blue skies and black sand on one of Greece's most enchanting islands.
Thalassa Seaside Resort & Suites is right on the shore in Santorini and draws both couples and families looking to relax. The 60 simply furnished, comfortable rooms, each with a private balcony or veranda, are housed within a postcard-perfect white exterior. Two pools, a beach bar, and a spa offer plenty to occupy your time on and off the sand, and the on-site restaurant's Mediterranean options range from steak frites to safridi (a local fish) and, of course, Greek salad. To get here, you could fly, but most of Thalassa's guests come via a five-hour, high-speed ferry from Athens to the port of Thira. From the port, it's worth renting a car if you'd like to explore farther afield—the brilliant blue water in the island's caldera (the result of an ancient volcanic explosion) is a popular stop, as is Port Athinios, where you can take a five-hour sunset tour on one of two replica 19th-century Greek schooners (from $45 per person). Episkopi Gonias, 011-30/22860-32688, thalassa-santorini.com, from $129, breakfast included.
MAP IT!

25 Most Photographed Places on Earth\