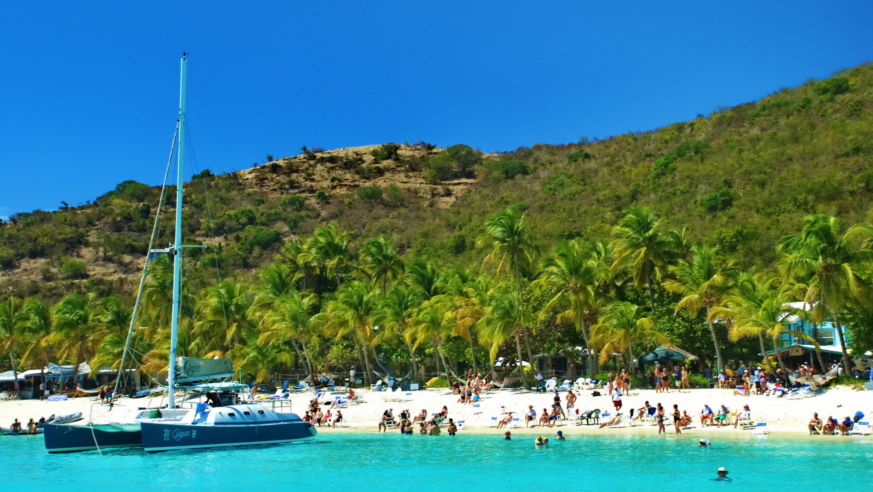 If a cocktail with a view of the ocean sounds like your idea of paradise, these are the bars of your dreams.

There are few things better than relaxing on a beach with a cocktail in hand, especially when the weather at home sinks below freezing. From party-forward day-drinking bars to hole-in-the-wall classics, let these nine amazing beach bars across the U.S., Mexico, and Caribbean serve as you bucket list for the whole of 2019. Now, what are you waiting for? Cheers!

Tucked inside the ritzy Chileno Bay Resort & Residences sits the seaside cantina, TnT. They offer a selection of Mexican street-style tacos, and you can’t go wrong with the camarón, deep-fried shrimp doused in chipotle mayo, jicama and cilantro. Then dive into the real treat on the menu—premium tequilas, mezcals, and raicilla, a lesser known but no less terrific agave spirit. Don’t leave without sampling the Sonora Commercial, made with aged tequila, eucalyptus syrup, lime, and Mexican Tepache, a fermented beverage made from the peel and the rind of pineapples. Try to plan your visit after sunset, when the fire pits are lit and guests can sip under the stars. Reservations required a day in advance. (aubergeresorts.com/chilenobay)

Blue and orange umbrellas dot outdoor boardwalk planks in front of what was once regarded as “the longest bar in all of Cape May.” The Rusty Nail, the Jersey Shore’s iconic surfer bar, has been well known along the Eastern Seaboard since the 1970s. A seaside haunt open May through December, it features an outdoor fire pit in the warm weather months and indoor fireplaces once the air chills. Order a cone of fried shrimp and wash it down with an Orange Crush, a classic Garden State beach cocktail made with Absolut Mandrin, orange, triple sec, and lemon-lime soda. If you’re on vacation with the family, this is an ideal spot to for the whole crew. The Nail is open to young, old, and the four-legged, complete with a full doggy menu. (caperesorts.com/restaurants/capemay/rustynail)

Mad Men fans will immediately recognize the Royal Hawaiian, the iconic pink hotel where Don and Megan Draper honeymooned in the heart of Waikiki Beach, Oahu. Explore the basement of the property, an ode to the hotel’s decorated past, then head to the Mai Tai Bar. The hotel’s beach-side enclave, speckled with umbrellas and pink chairs, is known across the island for its variety of mai tais. Order the 96 Degrees in the Shade to cool down. A frozen mai tai with Captain Morgan, fresh pineapple-passionfruit purée, lime juice, orgeat, and mint, it's topped with a generous dark-rum floater. (royal-hawaiian.com/dining/mai-tai-bar)

Rick’s Café, perched atop a 35-foot cliff on the west end of Negril, is known as the island’s best spot for watching the sunset. Patrons arriving at this vibrant multi-level watering hole before dusk are treated to another phenomenon: cliff diving. As island music plays, a soundtrack often provided by the in-house reggae band, locals and tourists alike head behind the bar to tiered jumping points of varying heights for a serious adrenaline rush. Not into cliff jumping? No problem. Order a rum punch and kick back at an indoor or outdoor table. If the plan is to see the sunset, arrive no later than 4PM, as seats fill up fast. And don’t forget a camera for an Instagram-worthy snap. (rickscafejamaica.com)

White picnic tables and navy blue umbrellas mark Navy Beach, a waterfront wonder set on a 200-foot private beach in Montauk, one of many seaside communities tucked within the Hamptons, New York’s coastal getaway. A casual bar and eatery, guests arrive by both land and sea. (There’s a dock for boaters to tie up on Fort Pond Bay.) Once inside, be sure to try out the classic Dark & Stormy, a blend of Gosling’s rum, ginger beer, and bitters. If you’re with an entourage, opt for a pitcher of Navy Grog, rum mixed with grapefruit, orange, and pineapple juices. When hunger strikes, order the buttermilk fried chicken with a side of truffled mac. And don’t be surprised when you see an added charge on your tab—from May to September, a donation of $1 is added to each check in support of the Navy SEAL Foundation. Helping out never tasted so good. (navybeach.com)

Flora-Bama, the self-proclaimed most famous beach bar in the country, gets its name from its unique coordinates straddling the Florida-Alabama state line. A landmark in the Gulf Shores community, this energetic watering hole offers live entertainment 365 days a year, with events that range from chili cook-offs and fishing rodeos to the Annual Mullet Toss and beachfront concerts. Flora-Bama is best known for its Bushwhacker, a milkshake-like concoction from a secret recipe involving five different types of liquor. The likes of Kenny Chesney have paid homage to the bar with lyrics like “I'm in the redneck riviera, It's getting crazy, getting hammered, sitting right here at the Flora-Bama.” (florabama.com)

Accessible only by boat, the Soggy Dollar Bar has been serving its famous Painkiller cocktail on Jost Van Dyke since the 1970s. Made with a top-secret recipe of dark rum, cream of coconut, pineapple, and orange juice and topped with freshly grated nutmeg from Grenada, the potent drink makes the trek to this salty saloon worth the effort. Devastated in 2017 by Hurricane Irma, Soggy Dollar’s owner and employees worked diligently to re-open in early 2018 for its rum-loving fans—and potential fans. Have a friend stopping by without you? The bar is famous for their “Drink Board,” an opportunity to buy a drink ahead of time for someone visiting. (soggydollar.com)

A love of beer and the ocean brought Pelican Brewing company to life in 1996 on Cape Kiwanda, situated about 100 miles west of Portland in coastal Pacific City. Today it’s the only beachfront brewpub in the Pacific Northwest. Head straight for the bar and order a Kiwanda, a pre-Prohibition cream ale inspired by one of America’s 19th-century beer styles, marked by a floral aroma and clean finish. Pelican Brewing Company offers seven year-round beers, as well as seasonal specials and a small-batch series called Lone Pelican. For those that can't make the trip, a live brewery webcam allows for an instant beach-bar fantasy get-away. (pelicanbrewing.com)

Everything's bigger in Texas, and the beach bars are no exception. To wit: Clayton’s Beach Bar. With a capacity for 5,000 guests, the venue features touring acts like Billy Currington and Nelly, and each March, it plays host to the largest free spring-break stage in Texas. Known for its frozen margaritas and Turbo Piña Coladas, this popular beachside bar is a partying hotspot and treats patrons to fireworks on the weekend. Whether heading to Clayton’s with friends or the kids (it’s family-friendly), be sure to have a designated driver or an Uber on speed dial—the bartenders are notoriously heavy handed. (claytonsbeachbar.com)