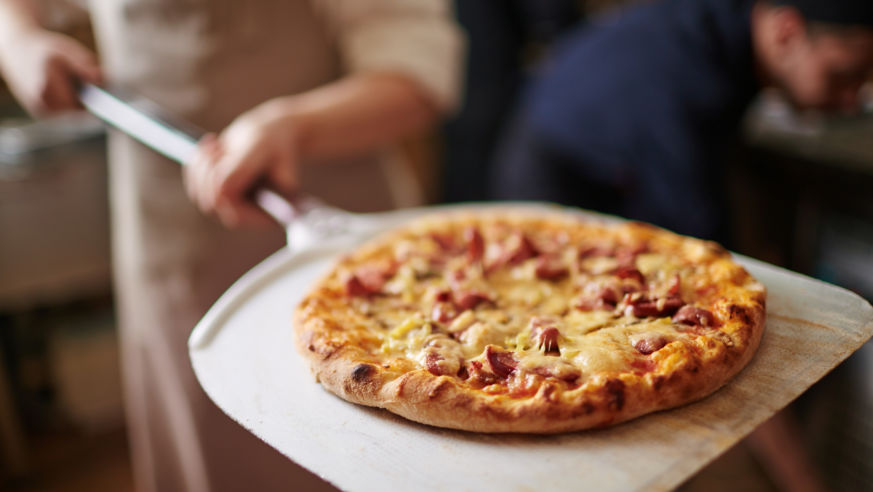 We asked—you answered. From NYC to Chicago to the West Coast, here's where to treat yourself to a little slice of heaven.

MIDWESTERN PIZZA: CHICAGO-STYLE AND BEYOND

"In Chicago, I head to Lou Malnati's for famous deep dish pizza." —@SheilaS

"We love the pizza at Dough Trader Pizza in Spearfish, South Dakota. Yummy sourdough crust from start that is 100 years old. It is pizza to die for." —Cheryl Wyckoff Smith

"Pizza Shoppe in Kansas City, near Liberty, Missouri. The crust has the right amount of crunch with great sauce that compliments any toppings." —Mamie Kuhl

"The Art of Pizza in Chicago. Best deep dish in the city, hands down." —Jennifer Hayes

IS THE NORTHEAST AMERICA'S PIZZA CHAMP?

"Federici's [Family Italian Restaurant] in Freehold, NJ. My parents had their first date there in 1950." —Carol Davison

"Patzeria Perfect Pizza on West 46th Street near Broadway in NYC. It is literally a hole in the wall consisting of a counter and four seats, but the pizza and cheesecake are fabulous! New York Style at its best. We stop there every year during our annual trip to NYC." —Michelle Persinger Caruthers

"Louie and Ernie's, in the Bronx, is my favorite pizza in NYC." —Robert Firpo-Cappiello

"Grimaldi's. They have several locations, but the best is in Brooklyn." —Lisa Gordon Liff

"Santarpio's Pizza, in East Boston, near the airport." —Mike Buscetto

"Rowayton Pizza in Rowayton, CT! You can sit outside in the summer, it's BYOB and you can smell the salt air. Divine!" —Kelsey Leigh Williams

"Dion's Pizza in Albuquerque. The salads there are awesome too!" —Thu Doan

"Rome's Pizza in San Antonio, the De Zavala location. Yum. I really miss it (living in Chicago now). Be sure to check out the menu. My favorite pizza is the Tomato Duet. There are other great unique topping combos." —Kim Jones"Oregano's in Gilbert, AZ. So delicious!" —Carrie Collins

PIZZA WITH A SOUTHERN ACCENT

"DiCarlo's Pizza in Wheeling, WV. Order by the slice or by the tray. Best there is." —Helen Gibbs

"Slice Pizzeria in New Orleans on historic Magazine Street near the boutiques, between the Zoo and Garden District." —@Winny_Churchill

"In Atlanta, it's Antico Pizza or nothing!" —Lauren Hanson Mitchell

"Oklahoma City, Plaza District: Empire Pizza is phenomenal. Everything from standard to exotic local flavor combinations. Great price, just over $3 a slice, and you must try adding the pink sauce!" —Holly Fothergill

"Primanti Bros. in Fort Lauderdale. Family-owned small chain brought their pizza to Florida. They have a 24-hour shop across the street from the beach. Also have heavy duty sandwiches. Grab some of that great pizza and go and eat it in front of the waves." —JoJo Red

THE BEST PIZZA IN THE WEST

"I'd like to say I travel the world for pizza, but Blaze Pizza is great and they are headquartered in Pasadena, California, about three miles from my house!" —Shannon McConnell

"Boston's North End Pizza Bakery (aka Boston Bob's Pizza) in Kailua, HI. We always went there when I was a kid and Bob would put on whatever music we wanted—he always got a kick out of us asking him to play The Beatles!" —Kaeli Conforti"