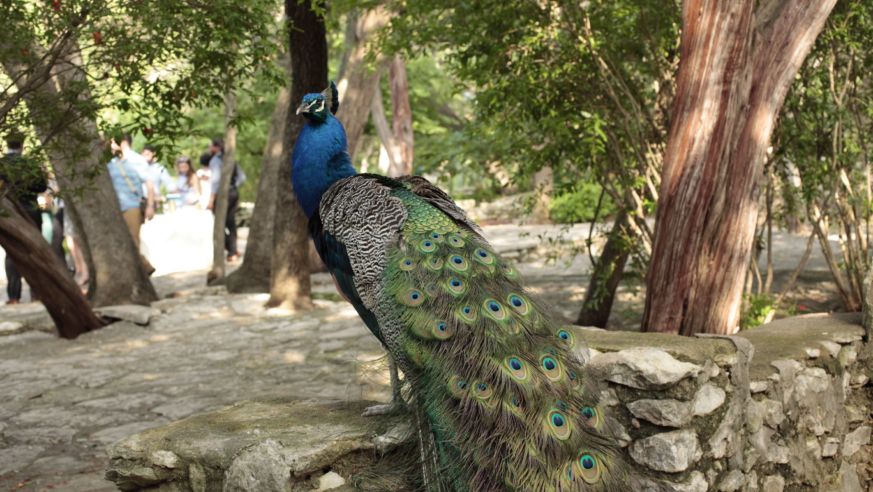 Mayfield Park is keeping Austin weird, one free-roaming peacock at a time.

Like the Dukes of Hazzard on the run from Sheriff Rosco P. Coltrane, the law finally caught up with Whitney en route from Del Rio, Texas, to San Antonio. Two-plus weeks on the road will increase anyone's odds for a traffic stop, but in this particular case, Whitney had taken a long-cut around Brackettville, Texas, to avoid stirring up her irrational fear of wind turbines. (We are not making this up—it's called anemomenophobia.) Turns out, the road less traveled is often used by shady types looking to avoid the border patrol checkpoint along I-90. Before long, Whitney had two cops on her tail and was swiftly pulled over. After mentally running through a checklist of things she hadn't done (speeding, harboring contraband, etc.), she owned up to her wind-farm phobia to one very serious-looking officer. In Duke Boys terminology, she thought she'd never get out of this pickle. But as they say, the truth will set you free, and as soon as they realized her fear of giant windmills was no joke, they sent her on her way.

Despite the trouble from the fuzz, taking the detour was ultimately worth it for the wildlife: Along the way, she spotted several antelopes with prominent spiral horns. Although seeing kudus in Texas is highly improbable, Whitney's mind immediately flashed back to the creatures from her Big Buck Hunter tournament days—she used to organize team outings, matching tie-dye T-shirts and all—and pulled to the side of the road, taking shot after shot of the big beauties. It was raining and cloudy by the time Whitney arrived in San Antonio. She took a much-deserved break at the Pearl, a cultural and foodie destination a couple of miles north of the River Walk, browsing handmade textiles, home decor, and jewelry atThe Tiny Finch, then fueling up with a fresh fruit-and-veggie shake at One Lucky Duck.

Next on the map? Austin. And the close wildlife encounters were just beginning: Back in Marfa, she received a true Keep Austin Weird–style suggestion to visit Mayfield Park, a "peacock park" that is not a zoo. The pretty beasts unfurled their plumage as Whitney snapped them mid-mating dance.

Later that night, Whitney got her ultimate Texas experience at The Broken Spoke in Austin, a dance hall dubbed the "best honky-tonk in Texas," where locals pay a $12 cover to two-step to live music, sip beers, eat barbecued brisket and cups of potato salad, and watch newcomers try their best to fit in. Whitney had no problem there: Soon after she arrived, a local named Polo who says he comes every Saturday asked her to dance. Even better, a local legend was in the house: Dressed in a flashy red shirt studded with rhinestones, Broken Spoke founder James M. White made his way through the crowd, which treated him with deference and respect, as though he were a beloved local politician.

As barbecue fans know, sampling only one barbecue joint's fare on a visit to Texas just isn't enough, so on the suggestion of a Houstonite, Whitney traveled southeast of Austin and spent most of her day among the "pit bosses" at Smitty's Market in Lockhart, Texas, an authentic smokehouse known for its sausages that's about as non-touristy as you can get. (Think: fictional Freddy's BBQ Joint on House of Cards before the media got wind of it.) Whitney eagerly carved into a pile of meat served on a double-stack of butcher paper, which was easier said than done: Smitty's gives patrons only a knife and a spoon, encouraging guests to eat with their hands and get delightfully sloppy. Wet-Naps? As if.

A soothing punctuation mark to this Texas travelogue was a sunrise visit to artist James Turrell's Twilight Epiphany Skyspace structure, a grass, concrete, stone, and steel structure with a rectangular window to the sky, designed to function as a mind-bending play on color when the sun rises and sets. Whitney lay on the ground and watched the colors of the sky change as the pavilion's artificial light glowed around it, tricking the mind into thinking the sky is a different color than it actually is—an immersive, highbrow version of the 'blue or white dress" debate. Visits are always free.

Whitney's Travel Tip: First, don't cut around the Brackettville/Uvalde border patrol checkpoint if you know what's good for you. Second, at James Turrell's Skyspace, sunset viewings are usually packed with people and require a reservation, but if you have the chutzpah to rise and shine before the sun comes up, morning "shows" are wide open. In fact, you might have the entire exhibit to yourself.

Next stop: Finding our inner Francophile in Louisiana