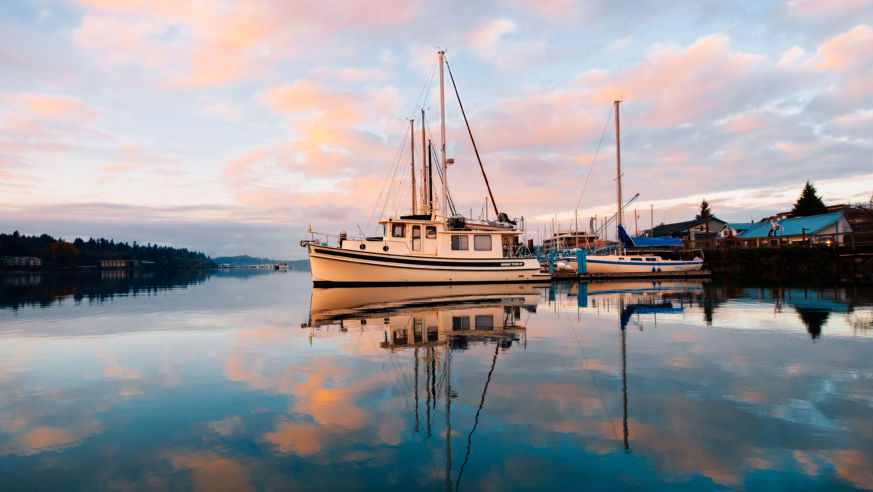 Olympia, Washington, has a beautiful waterfront that is only one of its many charms.

There's no better guide to a city than someone who lives there, so we asked Olympian Riana Nelson, a musician and Cultural Ambassador of the U.S.A. for her take on culture, food, and drink in the city she calls home.

Riana Nelson started traveling the world right after graduating from the University of Michigan, thanks to performing on cruise ships and working for Disney in Beijing, China. But when she and her brothers formed Derik Nelson & Family, a trio known for unique three-part harmonies, they began working with the U.S. Department of State as Cultural Ambassadors of the United States and traveled the globe to promote cultural diplomacy through music and arts education. They perform in places like Turkmenistan, Moldova, and Albania to share their music, which blends the driving yet gentle melodies of folk-inflected rock of the 1970s, the familiar rhythms that made Nashville famous, and the contemplative lyrics associated with some of today’s popular indie singer-songwriters, like Sufjan Stevens and Bon Iver. But no matter how far and wide she travels, she loves coming home to Olympia, Washington. The scenic state capital, at the southern end of the Puget Sound, is home to less than 52,000. Its creative energy and the surrounding natural wonders make it a destination for a relaxed weekend—or longer. We checked in with her to learn about her favorite spots to eat, shop, hang out, and just be.

Eat Your Heart Out

When it comes to sampling Olympia’s flavors, go downtown. Riana is a big fan of the local food truck culture, giving a particular shout-out to Arepa, which serves Venezuelan-style fare like killer plantains and yuca fries with garlic oil dipping sauce. The trucks park in a cluster close to picnic tables, so you can savor the fare while you soak up the city’s vibe. About a block away is Olympia Coffee, which takes java very seriously. She has an artist’s appreciation for the artistry of the baristas here. They ground beans and slow-pour everything to order. But perhaps the most exciting attraction for eating and drinking is the Olympia Farmers Market, a year-round indoor emporium where the region’s freshest flavors have been on display for 45 years. Riana has a few vendors that she regularly visits, like Johnson Berry Farm. “My favorites are the sweet and mellow popular Tayberry or seasonal Little Wild Jake Blackberry jam,” she insists. “But you can also go spicy and savory with their spicy varieties like the XXX spice Blackberry Habenero or Raspberry Chipotle.” In a clever move, they sell carry-on-friendly sizes, so stock up.

She also has a special place in her heart for Skipping Stone Garden, a husband-and-wife-owned farm that peddles thoughtfully grown organic vegetables. Down the street is 222 Market, a more modern artisanal food hall in a 1940s-era building that originally housed a car dealership. One of Riana’s favorite stop is Sift and Gather, another husband-and-wife-owned business, this one famous for its gooey sticky buns. Just be sure to heed her warning: the pastries go on sale at 10 a.m. and when they’re gone, that’s it. Better luck tomorrow. Sofie's Scoops is a must for its small-batch gelato. Their imaginative flavors include candied ginger, cardamom, and salty butterscotch. If you’re looking to sit down for something a little fancier, she recommends the Bread Peddler, a refined yet laidback French-inspired bistro with superior local mussels in hard cider sauce. The sister café, also in the market, sells coffee drinks, sandwiches, and pastries until afternoon each day.

Hiking and camping are one of Washington’s most terrific attractions, and outdoorsy types will find that Olympia’s surrounds are among the region’s finest. Take, for instance, the Hoh Rain Forest, one of the largest temperate rain forests in the country. A big reason it stands out, Riana notes, is that it’s the starting point of hiking trails that run through Olympia National Park. Another option for getting out of the city for the day is Ruby Beach, a rugged, rural oasis that’s about a two-hour drive from the city. Riana has mastered the way to enjoy the place: “Walk north along the beach to the mouth of the Hoh River. The seastacks are beautiful!" she says. "Go at low tide, and definitely be mindful of the tide tables or you won’t be able to return to your car if the tide gets too high!”

Getting to and from Ruby Beach is part of the fun because along the way you can stop at Kalaloch Lodge, a collection of rustic-chic cabins that overlook the water and you can find rates that hover around $100 in the off-season, but she strongly recommends stopping here even if you’re not planning an overnight because its Creekside Restaurant is an absolute gem. She speaks whimsically about watching the ocean as you tuck into an exquisite dinner made of local products--especially during storm season. It’s one of the greatest perches for storm-watching around.

There’s plenty of natural beauty in the city as well. Riana’s go-to for nature walks is Watershed Park, a 1.4-mile loop trail a few minutes from the Capitol Building that she describes as an "urban oasis." You can wander amid native plants, huge maple trees, and a variety of moss and fern species. There are more than 20 bridges and boardwalks that cross over natural springs and the gorgeous Moxlie Creek, so carve out some time to explore.

Local retailers embody Olympia’s creative, smart indie spirit. Riana is a big fan of Pieces to Peaces, a gift stand in the Farmers Market that sells a assorted styles of adorable handmade headbands (Riana has more than a few), including some for pets. Owner Danielle Hale, who Riana describes as an “incredible, badass mom,” has created something of a mini empire with her accessories, selling them far and wide by mail order.

Downtown, Radiance is well worth a visit, not least because it captures the essence of the town’s freewheeling vibe. The fragrant, relaxed shop is stocked with essential oils, natural skincare products, bulk teas, and other holistic-minded goods. Psychic Sisters, which you can find by looking for the neon sigh that reads “The psychic is in,” sells funky gifts and jewelry as well as visions of your future, thanks to the mediums who work there. And, she notes, their second-hand clothing selection is a site to behold: everything is sorted by color. Got kids with you? Make sure to take them to Captain Little, a toys shop with delightful toys, puzzles, games, quirky gifts. And then there’s Browsers, an 80-year-old bookstore where you’re almost guaranteed to lose track of time. Riana loves it for the beautiful bright loft upstairs with spacious work tables and free WiFi, not to mention the Pacific Northwest-inspired postcards and books about the region.