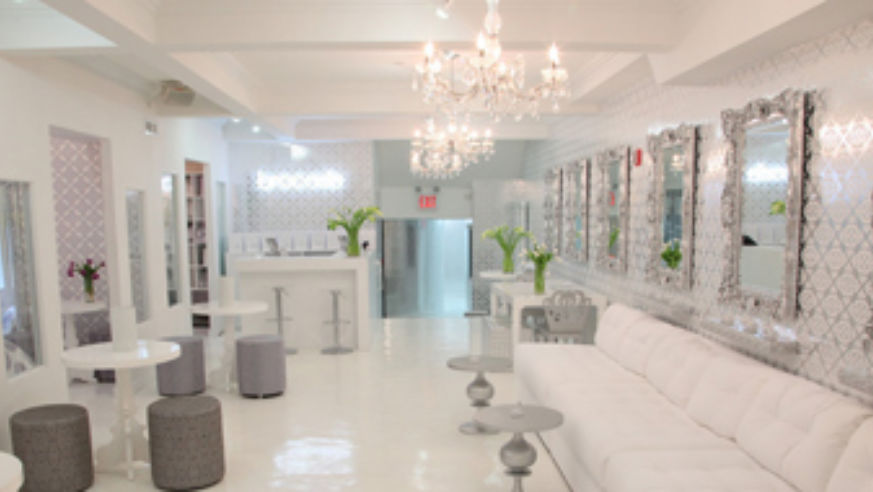 Rob Loud
Brocade Home, one of the shops in the new Limelight Marketplace

The 1846 landmark Episcopal church that once housed the Limelight, one of New York City's most notorious nightclubs in the '80s and '90s, reopened earlier this month as Limelight Marketplace, a three-story intimate shopping experience. A $15 million renovation has left the exterior of the Gothic Revival-style church largely untouched, but has transformed the interior into a European-style festival of shops, inspired by London's Covent Garden, Dover Street Market, and Burlington Arcade. Located at the corner of 20th Street and 6th Avenue, Limelight Marketplace is 14 short blocks south of Macy's flagship store and the Empire State Building. (If you're feeling adventurous, hop a pedicab to get there.)

Retail developer Jack Menashe brought in designer James Mansour to restore the building to its pre-club luster. During the renovation process, the design team uncovered original elements of the church, including several 19th-century stained-glass windows. Spread out along the somewhat maze-like layout (a remnant from the Limelight club) are dozens of shops you can't find in suburban malls. Some are flanked by stained-glass and ornate, carved pattern windows; there are even two "window shops" set in the actual lancet-arch windows.

The shops showcase a mix of established brands, like LeSportsac (chic handbags) and Havaianas (Brazilian flip flops), and up-and-comers using the unique format to either set up their first brick-and-mortar location or to try their hand at the Manhattan market.

CupcakeStop: The dessert truck and its rotating cast of 60 flavors has become a gourmet street food staple in just a year and a half on the scene. The company's first freestanding location is a welcome addition for those who don't have the time to chase the truck around town. Note: You'll still score the best deals by following the mobile location via its Twitter feed. Signature flavor: red velvet. Cupcakes $3. cupcakestop.com.

Butterfly Bakeshop: This is the first brick-and-mortar venture for the bakery, which was conceived of a year ago after chef-owner Orlando León's daughter requested he make her a butterfly cake for her 6th birthday. The buzz over the finished product, covered with colorful sugar butterflies, was so great that starting a bakeshop was a no-brainer; every cake now features a sugar butterfly. Signature flavor: guava and dulce de leche with vanilla cake and vanilla buttercream. Mini cakes (similar in size to a generous slice) $4.25. butterflybakeshop.com.

Brocade Home: The latest venture from West Elm founder Lisa Versacio, Brocade Home has taken over nine vendor spots on the second floor and transformed them into a whimsical wonderland full of lace-patterned wall coverings and metallic quilted cube chairs. Check out the first-floor kiosk for merchandise all under $49. Cool find: a set of four nesting bowls in shades of gray that together form the shape of a rose, $29.brocadehome.com.

Caswell-Massey: Not every vendor in the venue is new: At 250-plus years old, this personal care brand has been around longer than the church itself. Signature item: Almond Cold Cream Soap (three hand-size soaps, $18). The soap has cold cream built into it and was used by the Eisenhowers in the White House. caswellmassey.com.

Thérapie New York: Founder Renee Chow describes Thérapie New York, an offshoot of the Upper West Side shop, as "a very edited department store." From fun kids' stuff to bath and body and health and beauty merchandise, the focus is on cute and functional items. Cool find: screen wipes for computers in the form of plush giraffes and tigers, $10.therapieny.com.

Petrossian: The caviar connoisseur takes its decadent treats downtown. Among the edible gifts is a special blend of green tea ($19); Alexandre Petrossian, managing director and grandson of the company's founder, explains that his mother wanted her sons to drink green tea, but they thought it was gross, so they asked her to make them one that tasted good. "So she mixed it with flowers, fruit, and spices, so her sons would drink it," he says. Cool find: Vodka Chocolate Pearls (fine dark chocolate laced with Petrossian vodka), $46.petrossian.com.

Baci Gelato: The Albertson, N.Y.-based gelato maker decided it was time to introduce its Italian treats to the city. The smooth and creamy gelato is made fresh on-site, with varieties including a special blend of vanilla that's a mix between Madagascar and Tahitian vanilla bean. Signature flavors: panna cotta, stracciatella, and the Ferrero Rocher-esque chocolate hazelnut. Gelato from $4. bacigelato.com.

Mari's New York: Run by Mari Tuttle, former director of bakery operations at NYC brunch standard Balthazar, this is the first retail store for the 3-year-old business. Unique flavors of artisanal baked-from-scratch brownies spill over into the coffees and teas also on hand. According to Mari, the "sleeper" brownie is Heat, made with chipotle peppers, smoked ancho, and cinnamon. Signature flavor: caramel sea salt. Brownies $2.50. marisny.com.

Barbra Scott Flowers: The other window shop features the creations of Barbra Scott, who's been providing floral designs for over 20 years—but she doesn't use just any flowers. Scott preserves actual flowers, so you get quality, long-lasting arrangements of the real thing, not cheap imitations. Cool find: preserved orchid in glass, $49.barbrascott.com.

Still to come: The first Manhattan outpost of the legendary Brooklyn pizzeria Grimaldi's, which will be open 24 hours; Cana Wine Bar, with 20-plus wines by the glass and a small-plates menu by chef Nicola Maurello; and a bi-level gastropub.