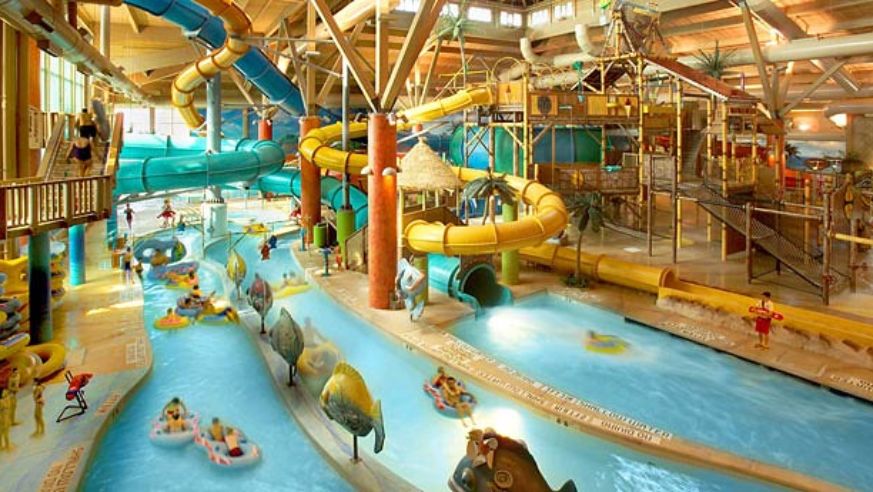 No matter how cold it gets outside, you'll always find temperatures in the 80s in these indoor water parks, where you can do everything from surfing 35-mph waves to riding a lazy river, water-park style.

There's no need to book a plane ticket if the whole family is longing to splash in the water in the middle of winter. These 10 indoor water parks stay warm all year round, and have everything from lazy rivers to a 10-story-tall waterslide.

Great Wolf Lodge, Grand Mound, Washington
America's largest family of indoor water park hotels, Great Wolf has 12 lodges to its name. Its only West Coast location is in Grand Mound and draws much of its attendance from nearby Seattle. Those looking for thrills either head to the Howlin' Tornado, a raft ride that swirls riders up its funneled 30-foot sides, or the River Canyon Run, where a round raft drops six stories through a chute, sailing over 500 feet of water in all. There's also Fort Mackenzie, a four-story tree house loaded with suspension bridges, cargo nets, and full buckets to keep climbers soaked. 20500 Old Highway 99 SW, Centralia, WA, 800/640-9653, greatwolf.com. Park access for resort guests only; rooms from $199 (includes water park tickets and sleeps four).
Short drive from Tacoma (55 miles), Seattle (84 miles).

Wilderness Territory Waterpark Resort, Wisconsin Dells, Wisconsin
Four distinct parks make up this massive 600-acre resort, which stays a balmy 88 degrees regardless of the temperature outside. It may take several seasons to experience all of the rides here, but the park's tour de force is the Hurricane—a family raft ride that drops 58 feet then spins into a funnel that mimics a hurricane in enough detail (lightning and fog machine alert!) to be as terrifying as it is fun. Kids and adults alike attest that filling up the kiddie pool with "Bumper Boats" was a sheer stroke of genius, and a word to the wise: The Great Wave—a 15,450-square-foot wave pool that pits swimmers against five-foot swells—is addictive. 511 E. Adams St., Wisconsin Dells, WI, 800/867-9453, wildernessresort.com. Park access for resort guests only; doubles from $99.
Short drive from Madison, Wis. (55 miles).

Splash Lagoon, Erie, Pennsylvania
The first water park in the U.S. opened in 1989, and 13 years later Pennsylvania finally caught on onto the trend with Splash Lagoon. It may have taken a while, but as this park proves—some things are worth waiting for. The Tiki Treehouse is right at the top of the park's greatest hit list—half fortress, half obstacle course, the attraction is a favorite among kids who love the bridges, slides and the huge bucket of water that periodically deluges unsuspecting guests. Of course, waterslides feature prominently here and the two standouts are: Shark Attack, a furiously fast body slide that twists and turns outside the building; and the Black Hole, a tunnel slide that leaves you in the dark until the very end. 8091 Peach St., Erie, PA, 866/377-5274, splashlagoon.com. Day passes from $40.
Short drive from Cleveland (102 miles), Buffalo (96 miles), Pittsburgh (128 miles).

Avalanche Bay Indoor Waterpark, Boyne Falls, Michigan
In Michigan's northwestern region, Boyne is best known as a ski escape. But the area is also home to the 88,000-square-foot Avalanche Bay, where skiers often thaw out in the 84-degree temperatures. Adventure-seekers should head to the South Wall, a 25-foot-high climbing wall that pours H2O on daredevils attempting to summit. Those keen to stay on the ground should listen for the Splasherhorn's rumblings—the four-story play structure dumps 800 gallons of water on passers-by throughout the day. The park is also home to Michigan's only surf simulator, the Rip Zone, where guests can try either stand-up surfing or boogie boarding. 1 Boyne Mountain Rd., Boyne Falls, MI, 800/462-6963, avalanchebay.com. Day passes from $22.
Short drive from Traverse City , Mich.(58 miles), Grand Rapids (169 miles).

Kalahari Resort, Sandusky, Ohio
The African-themed Kalahari is an expansive 173,000 square feet (it's the largest water park under one roof in the U.S.) and features a spectrum of thrill rides, from the 55-foot-tall Cheetah Race waterslide to the speedy, 400-foot-long Rippling Rhino tube ride. But a must-do is the 500-foot-long Zip Coaster: Utilizing a conveyor belt system, it launches two-person rafts into a series of free-fall drops, on-a-dime turns, and tunnels, all in a 30-second blur. 7000 Kalahari Dr., Sandusky, OH, 877/525-2427, kalahariresorts.com. Day passes from $39.
Short drive from Toledo (60 miles), Cleveland (62 miles).

Schlitterbahn Galveston Island Indoor Waterpark, Galveston, Texas
Meet the chain that invented the lazy river—a concept so popular that it's now practically a requirement at any water park worth its salt. The latest outpost from Schlitterbahn—a family-owned operation with four parks in the U.S.—has put a twist on the concept by adding waves to a river that is nearly a quarter-mile long (called Torrent River, this splashy adventure is anything but lazy). The company has another first under its belt with this Galveston Island park, too; it's the first "convertible" water park in the world, which means that it can convert from indoor to outdoor, depending on the weather. Of the dozen indoor attractions at the 26-acre park, the steep, 60-foot-high Rohr! is a favorite, where riders break speeds of 30 mph while whooshing down a 244-foot-long body slide. 2026 Lockheed St., Galveston, TX, 409/770-9283, schlitterbahn.com. Day passes from $26.
Short drive from Houston (50 miles), Austin (215 miles).

Water Park of America, Bloomington, Minnesota
This 70,000-square-foot water park is right next to the gargantuan Mall of America, refreshing tired shoppers with more than 300,000 gallons of water daily. The park's signature is a 10-story-tall tower waterslide for raft riders that drops and curves for more than a mile (the enclosed-tube ride is so long that it even takes a loop outside the building!). No water park would be complete without a surf simulator, and the Water Park of America delivers with a wave-maker that moves water between 25 to 30 mph. For younger children there are three body-slides and activity pools. After drying off, kids can hit the huge arcade with more than 100 games. 1700 American Blvd. East, Bloomington, MN, 952/ 698-8888, waterparkofamerica.com. Day passes from $30.
Short drive from Minneapolis (13 miles), Cedar Rapids, Iowa (266 miles).

KeyLime Cove Indoor Waterpark Resort, Gurnee, Illinois
Part of a 414-room resort, KeyLime's 65,000-square-foot water park is decorated in dazzling colors, easily brightening up any Midwest winter. The real claim to fame is the dizzying Hurricane Vortex, which shoots raft riders 40 mph into an orange-and-yellow swirling bowl and then drops them on a 44-foot plunge. Kids can't get enough of a pair of body slides named Wahoo and Screaming Banshee (the names really say it all), and parents are pleased with the adults-only whirlpool at the KeyLime Grotto. 1700 Nations Drive, Gurnee, IL, 877/360-0403, keylimecove.com. Park access for resort guests only; double rooms from $190 (includes water park tickets).
Short drive from Chicago (40 miles), Milwaukee (50 miles).