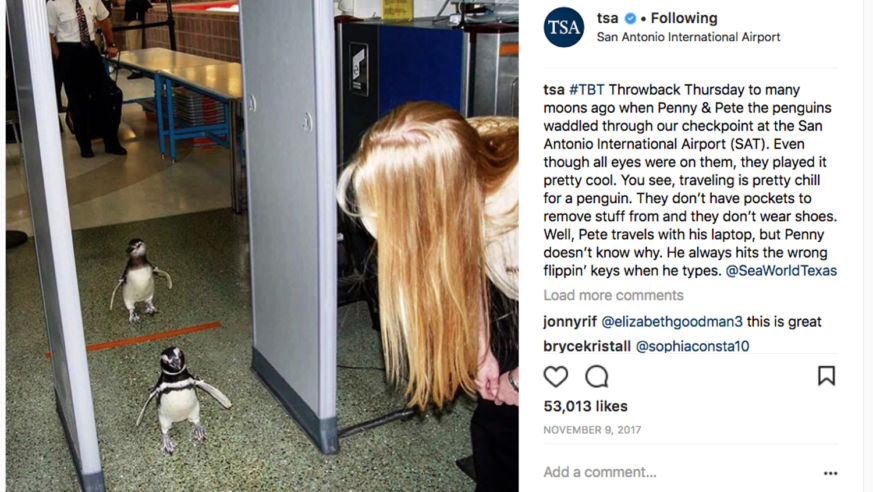 With more than 771.5 million people passing through security checkpoints at our nation’s airports in 2017 and a summer travel season expected to be the busiest ever, the Transportation Security Administration more than has its hands full. After a record number of firearms were discovered in carry-on bags around the country last year, the TSA rolled out more stringent screening procedures in April, but that hasn’t stopped the clueless and the crafty alike from attempting to bring some truly inappropriate things on board. From swords and throwing stars to guns and grenades, the most jaw-dropping discoveries are documented on the administration’s Webby Award-winning Instagram account, an often hilarious (see: Darth Vader interacting with an explosives detection dog, posted for Star Wars Day on May the 4th, or a microwave full of weed, posted on 4/20), always enlightening feed run by TSA social media lead Bob Burns. “We're not in the entertainment business, but I'm allowed to be funny because that's what gets people to come back,” Burns says. “If you look at our posts, you'll notice the first half of it may be tongue-in-cheek, and then the second half is more straightforward policy and procedure.”

Fans of the page have become accustomed to seeing weapons of all sorts in their timelines, from swords concealed in canes to stuffed animals smuggling knives to brass knuckles, live (and replica) grenades, and, of course, guns, guns, guns. Attempting to bring restricted items on your flight can result in hefty fines and even jail time, but those deterrents don't seem to have done much to stem the tide. Burns, who started as a security screener at the Cincinnati/Northern Kentucky International Airport in 2002, has pretty much seen it all, but even his mind boggles at some of the items people have tried to sneak through. “I always tell myself I'm not going to be shocked by anything else, but sometimes you see things and you just don’t understand. For example, I'm looking at a picture right now of an umbrella that someone took the time to take a tube, put a pocket knife in it, and zip-tie it to the inside of an umbrella to try to sneak their knife through, when they could have just put it in a check bag or mailed it to themselves or whatever they had to do if they wanted to have it at their destination. The question that always goes through my mind is when I see these things is, ‘Why?’”

The majority of the time, though, Burns is willing to give travelers the benefit of the doubt. “In a lot of cases, people aren't really thinking. Maybe this is the first time they’ve flown in 15 to 20 years, and they're not in tune with airport security,” he says. “They don’t have ill intent. Clearly if they knew it was going to hold them up or slow them down, they wouldn't pack it. I think in most cases, people just aren't aware of the procedures, which is one of the reasons we like to share a lot of this stuff.” We got the man behind the account to give us a quick rundown of some of his favorite posts; read on for his picks. 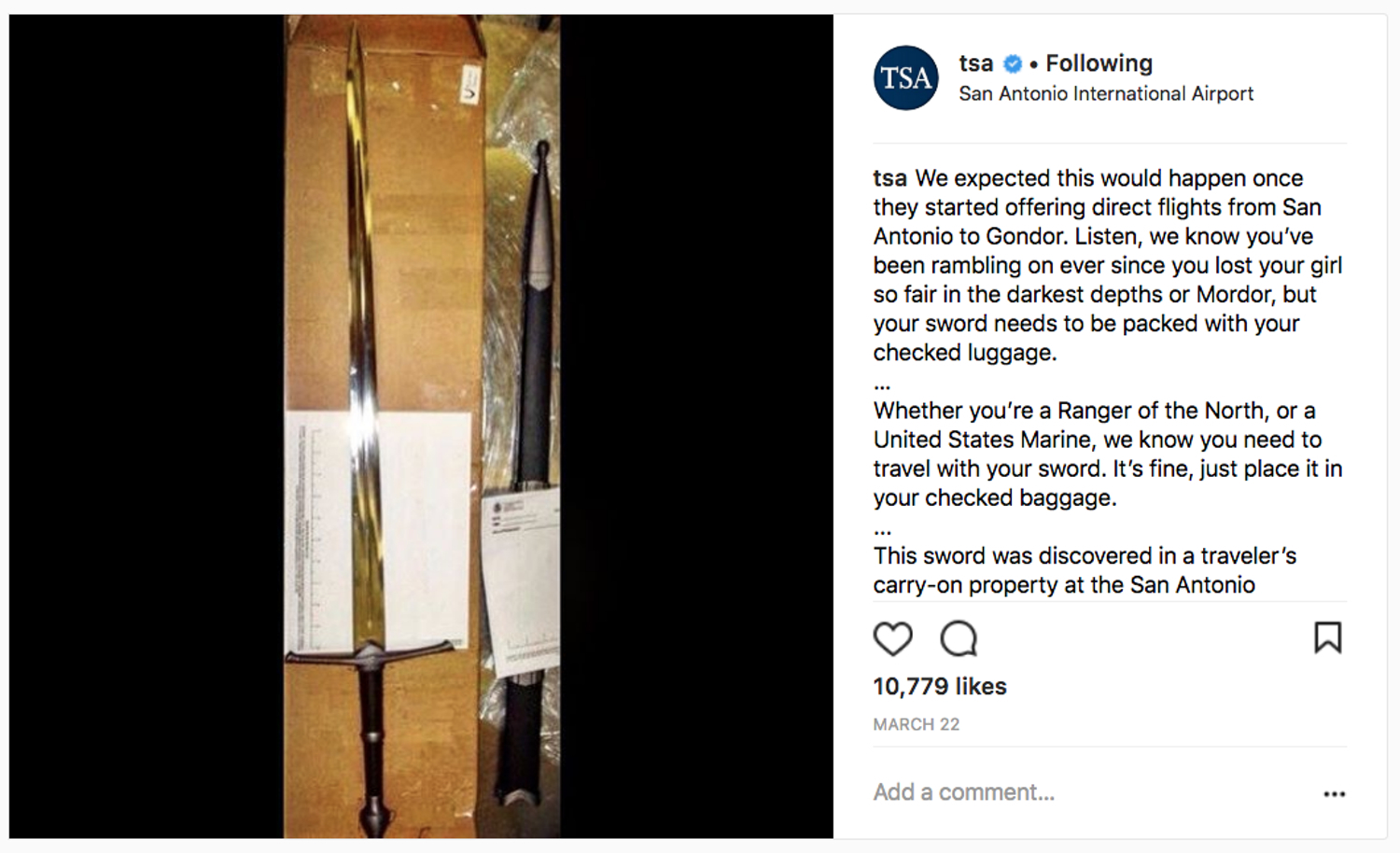 Burns is particularly pleased with this post, once described by a friend as his opus. "I jam-packed three references in, including The Lord of The Rings, Led Zeppelin, and Monty Python. Humor and references aside, the post fit my formula of entertaining our followers, while also letting them know how to properly travel with swords." 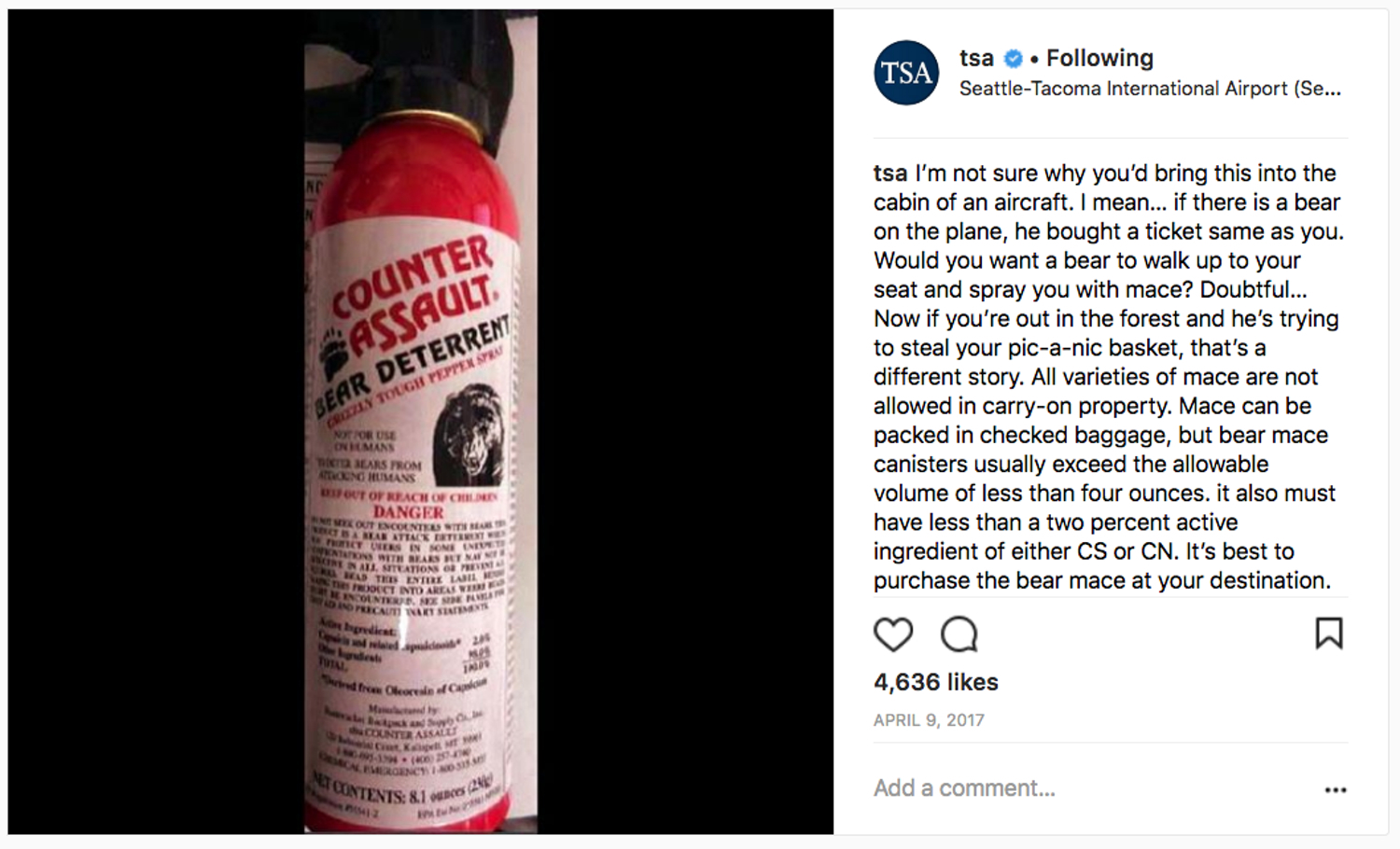 Bear attack in mid-air? Your guess is as good as ours. "This one is a favorite of mine because of the hypothetical silliness of making a bear a passenger," Burns says. "And it’s always great when you can throw in a Yogi Bear reference." 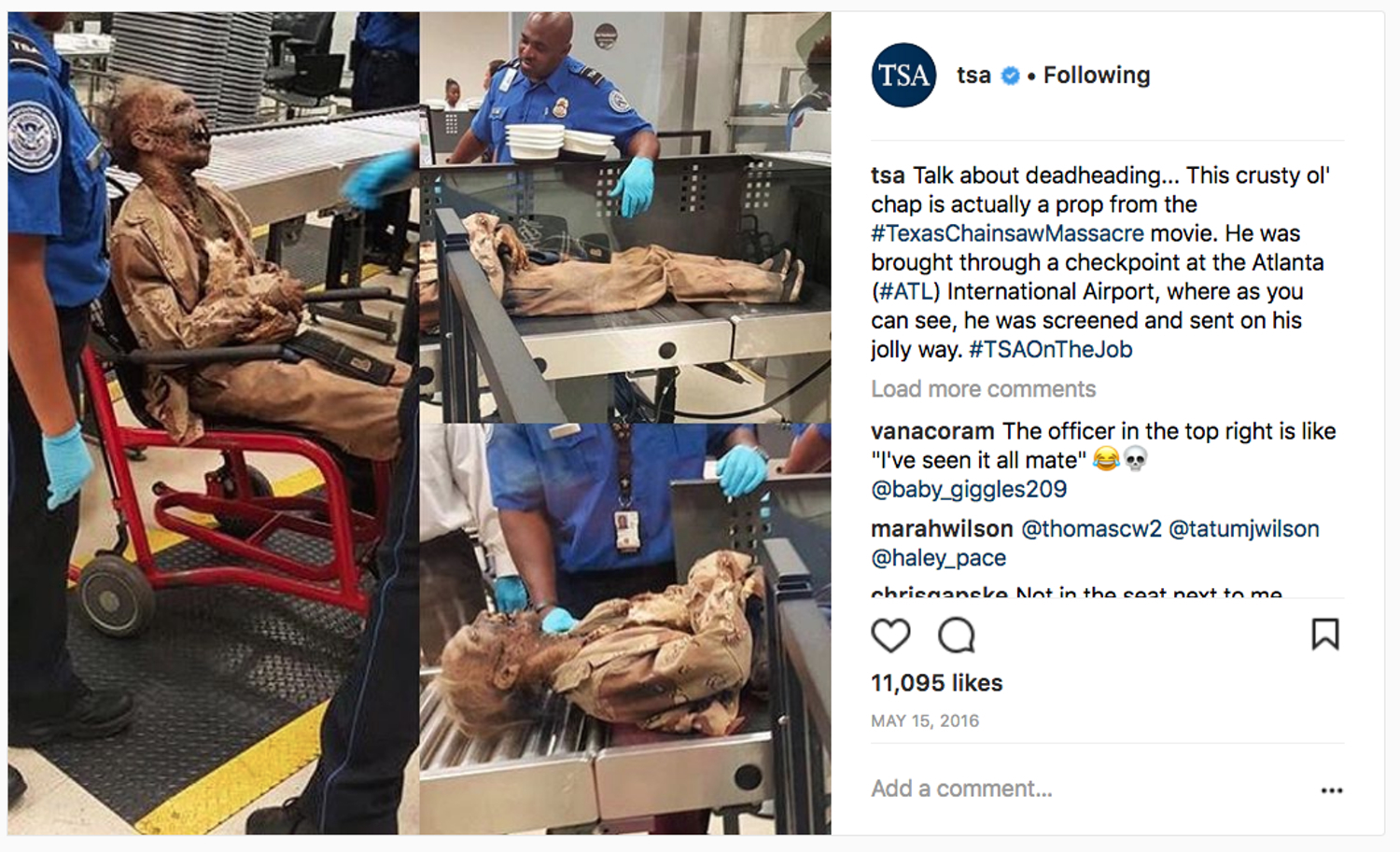 A prop for a film in the Texas Chainsaw Massacre franchise, this grizzled geezer is one of the strangest things Burns has seen come through security. "Apparently the guy had worked it out with the airline so he was able to take it on the plane. He pushed this rotting corpse up the the checkpoint in a wheelchair, and it was just the right size to fit through our X-ray machine, so we screened it and cleared it and off he went," Burns says. "The ridiculousness of seeing this movie-prop corpse being sent through the X-ray machine gets me every time." 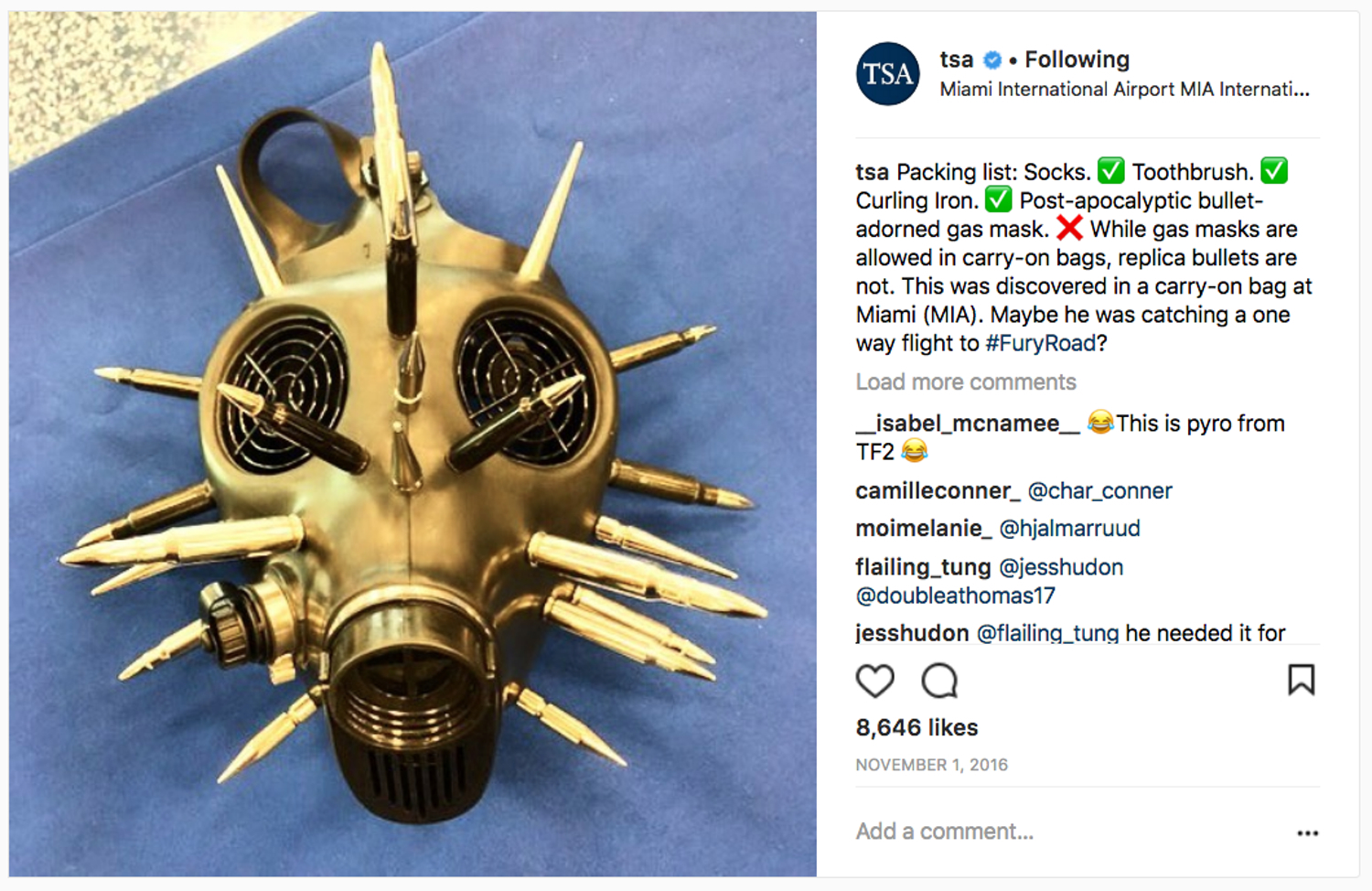 "Anything that resembles an explosive or projectile—any type of military ordinance—is strictly prohibited in carry-on or checked bags, for the reason that we don't know if they're real or not when we first spot them," Burns says. While bullets are allowed in checked baggage, you can't bring them in the cabin in any way, shape, or form. "I’m sure this is part of a costume or some kind of art project, but I’m not sure why it would be packed in a carry-on bag," he says. 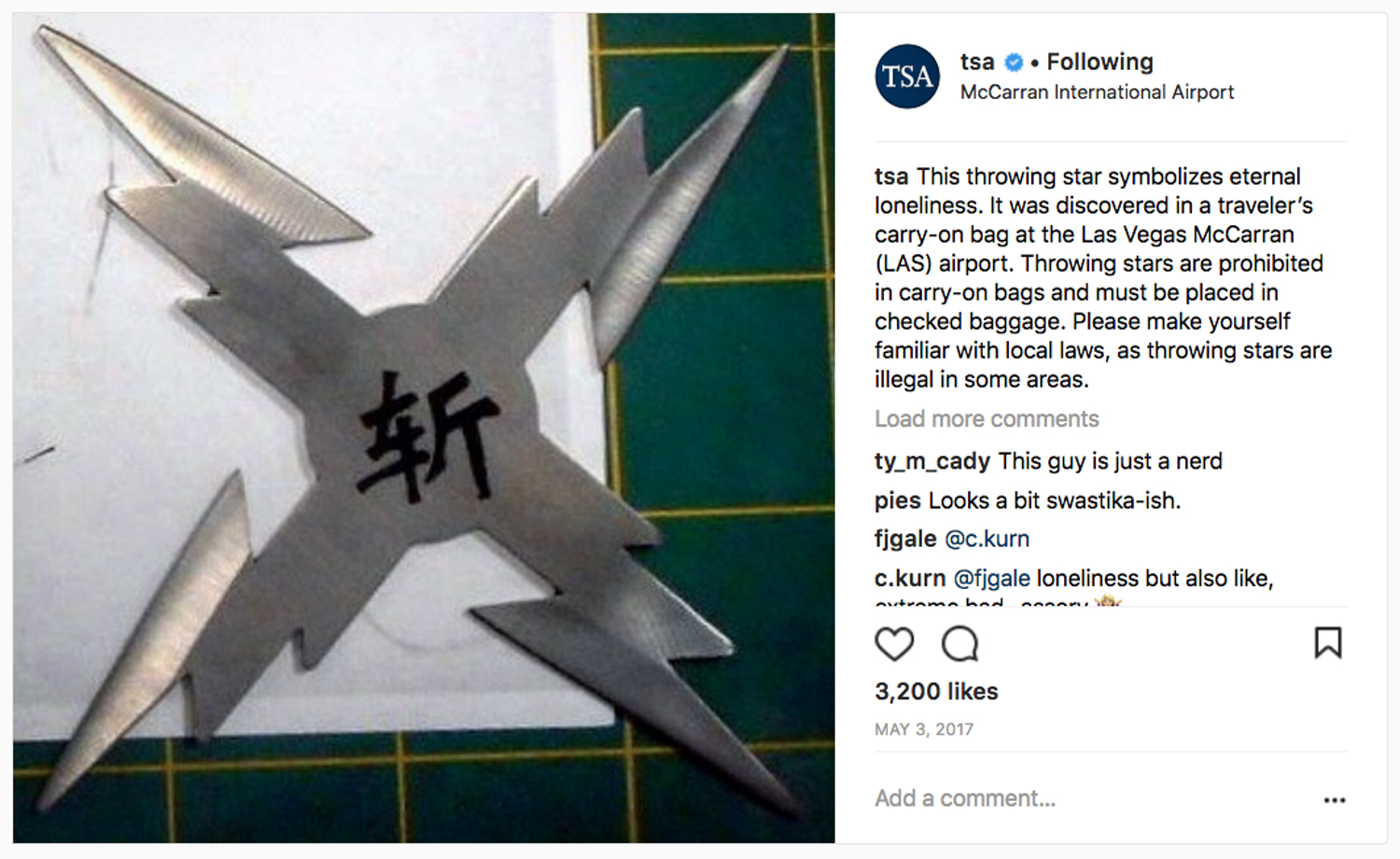 Throwing stars, like other weapons, can only be transported in the cargo hold—even specially designed ones. "It’s a lightning-bolt shuriken! I had fun with this one by making up a story that the writing was the international symbol of loneliness, assuming the owner is too nerdy to have a girlfriend," Burns laughs. "It’s all in fun." 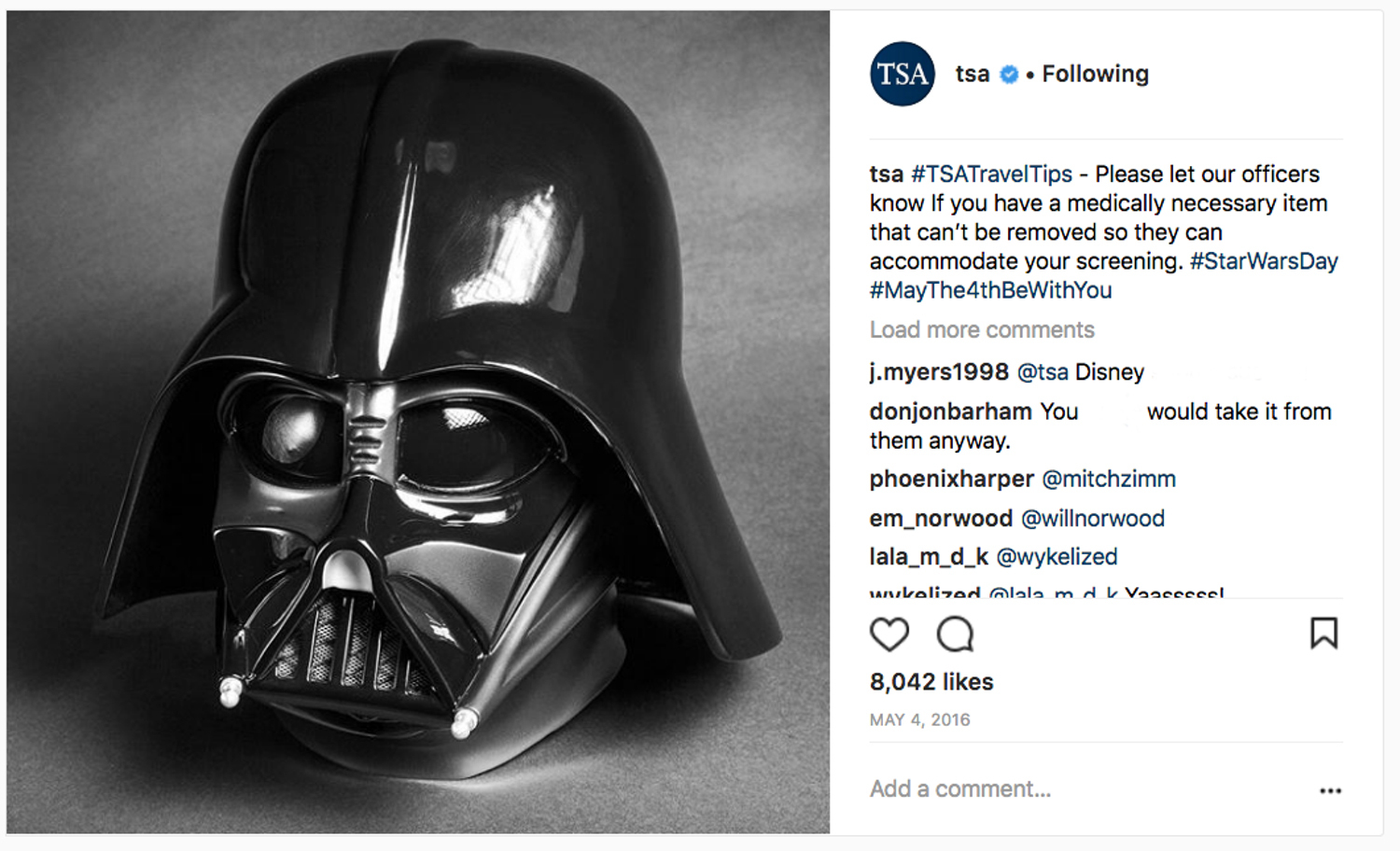 This ode to the Skywalker patriarch went up on May the 4th, and it's one that makes Burns justifiably proud. "I was able to use Star Wars Day as a vehicle to provide very important messaging 'masked' behind a silly post about Darth Vader’s helmet,” he says. 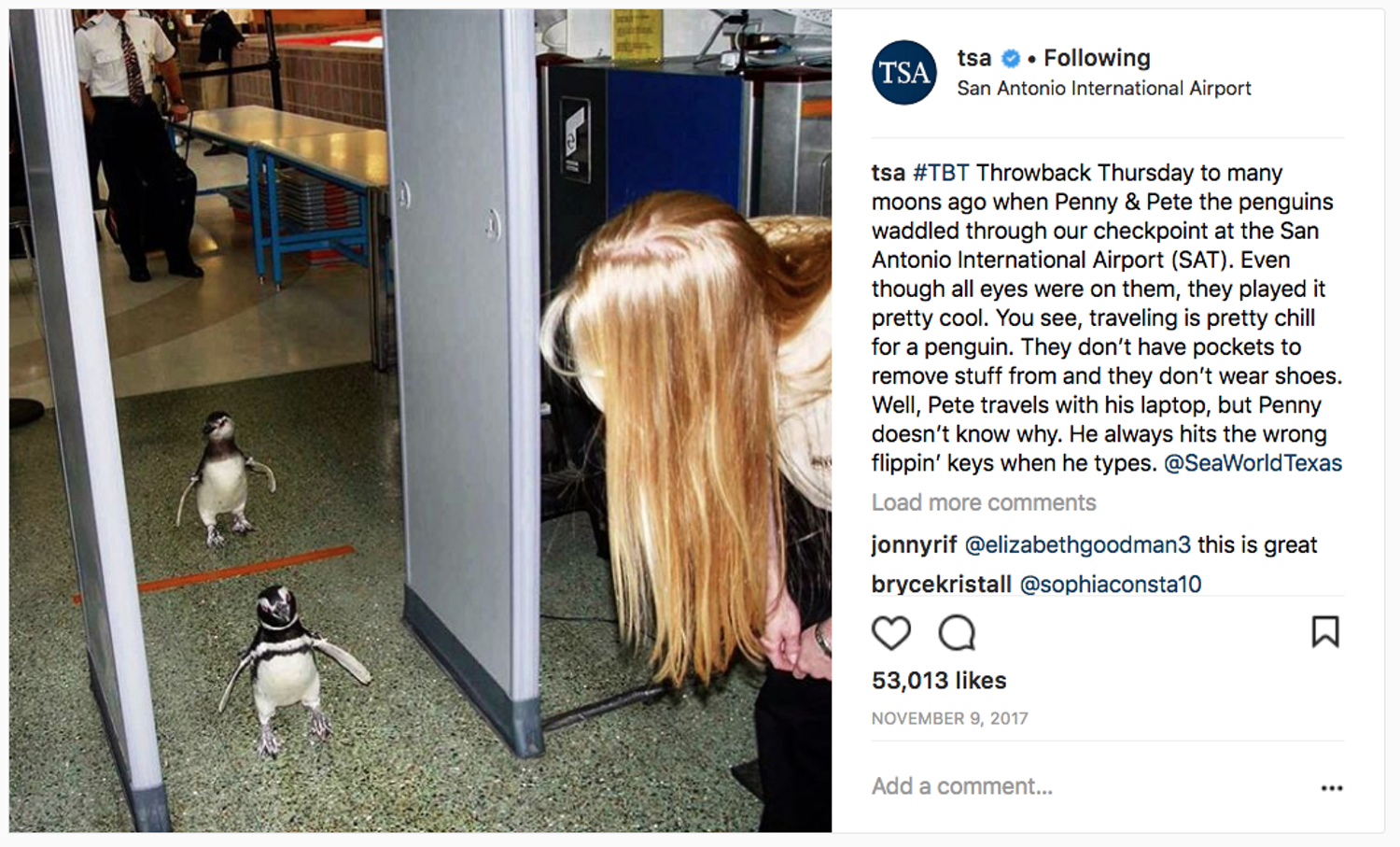 No, your eyes aren't playing tricks on you—that really is a pair of tiny aquatic birds waddling through security. "In San Antonio, because of SeaWorld, they travel with their penguins, Pete and Penny, from time to time," Burns says, "and they're trained to walk through the metal detectors." Why is this post a favorite, you may ask? Um, "because penguins," he says. (The "obviously" is implied.) And the people agree: At 53,000-some likes and counting, it's the account's most popular photo to date.

We were saddened to learn of the death of Bob Burns on October 19, 2018, and we extend our sympathy to his friends and family.