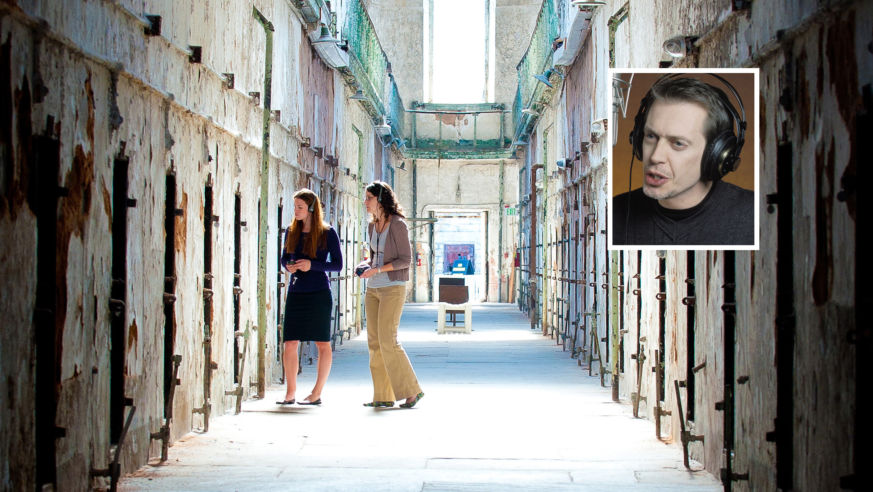 Steve Buscemi recorded the audio tour for mob-boss jailhouse Eastern State Penitentiary long before he was known as Knucky Thompson.

Viewing a cool exhibit is exciting all by itself, but hearing your favorite actor describe it while you're there? Now that's an experience. Here are 10 star-studded audio tours from around the world—and insider gossip about how they were made.

We talked with the creative geniuses behind several big-deal celebrity audio tours for the scoop on how the stars were involved and what to know before you go. You can listen to four of the tours right now! In the meantime, we're holding out hope for an aviation museum tour featuring audio by Samuel L. Jackson.

Believe it or not, the audio tour for the eerie, once-abandoned Eastern State Penitentiary—famous for locking up Al Capone—was recorded a full seven years before Steve Buscemi nabbed the role of mobster Knucky Thompson on Boardwalk Empire (LISTEN TO THE TOUR!). As director of public programming Sean Kelley tells it, Buscemi himself volunteered to help the museum while scouting a movie at Eastern State more than a decade ago. Kelley took him up on the offer, and Buscemi recorded the tour in four hours at Carnegie Hall, after taking the subway into Manhattan from his place in Brooklyn. "He couldn't have been nicer," Kelley says. Now that Boardwalk Empire has gained so much traction, the penitentiary advertises Buscemi's tour prominently on its brochure, the website, and in the building itself. Want to hear something uncanny? When Capone was arrested and subsequently thrown into the slammer at Eastern State, he was driving from Atlantic City to Chicago, presumably after a meeting with the real-life inspiration for Knucky Thompson.

What to know: The audio tour is three hours long, so allow enough time to hear it and visit the entire property. Photography buffs, bring your smartphone and your camera. There are so many bizarre artifacts and historic nooks to shoot here (including the dilapidated prison hospital and Capone's cell, complete with oriental rug), you'll rule Instagram for the day. Professionals, consider paying the $10 tripod fee, valid all season (admission $14, easternstate.org).

The massively popular exhibit Alexander McQueen: Savage Beauty has hopped across the pond from New York City's Metropolitan Museum of Art to the Victoria and Albert Museum in London. The show, which celebrates the late fashion designer's dramatic, imaginative clothes, debuts March 14. In the original audio tour, "Sarah Jessica Parker revealed how she was in awe of the designer during fittings for a custom piece, and when the two of them rode together to the Met’s ball, they remained respectively shy of one another," says Blaire Moskowitz, marketing manager for Antenna International, the company that produced the McQueen audio tour and several others on this list.

What to know: The exhibit runs through August 2, but buy your tickets now: Tickets are sold by timeslot, and some are nearly full (admission about $27, vam.ac.uk).

What to know: After you've seen the art indoors, take the free Dale Chihuly mobile walking tour, which guides you through downtown Tacoma to visit the artist's glass installations. Just call 888-411-4220 on your cellphone and listen; Chihuly himself narrates part of it (LISTEN TO THE TOUR!) (admission $14, tacomaartmuseum.org).

While recording the audio tour for the bright-blue Frida Kahlo Museum, popular Mexican actress Angélica Aragón mentioned to the sound engineer that her grandmother used to be part of Kahlo's small circle of friends years ago. The museum hadn't known that! Aragon was initially hired for her gravitas and dignified voice that felt perfect for Kahlo's story—now even more so.

What to know: Complement your visit to Kahlo's museum with a trip to the Anahuacalli Museum, also in Mexico City (admission about $4), which houses pieces from Diego Rivera's large pre-Hispanic art collection (admission about $6, museofridakahlo.org.mx).

Oscar winner Jeremy Irons has the distinction of narrating the English-language audio tour for Westminster Abbey. Fitting, considering Irons played Pope Alexander VI on Showtime's The Borgias (LISTEN TO THE TOUR!). Travelers also have good things to say about the 90-minute verger-led tours of the abbey's notable spots, including the tomb of Saint Edward the Confessor, Poets' Corner (Chaucer and Dickens are buried there), the Cloisters, and the Nave. If you'd rather worship at the abbey than tour it, there is never a fee for that.

What to know: Prep for your visit by downloading the abbey's free podcasts (itunes.com), which range from recordings of choral concerts to lectures (worship is free, admission about $30, verger tours about $8, westminster-abbey.org).

Would you expect anything less than vocals from Dolly Parton herself at the Country Music Hall of Fame? Step into the Hall of Fame Rotunda, a skylighted room emblazoned with bronze plaques for each member of the Hall of Fame, and you'll hear her voice on the audio tour. As Dolly says, "This special room is round, to ensure that every Hall of Fame member has a place of equal importance, and the members’ plaques are placed randomly around the room—except for the newest members, whose plaques can be found alongside the painting." The painting she speaks of is Thomas Hart Benton's The Sources of Country Music, a canvas depicting fantasy musicians ranging from gospel singers to hoedown dancers, commissioned in 1973.

Name your favorite NYC-affiliated personality (Susan Sarandon! Anne Hathaway! Pat Kiernan!), and chances are he or she narrates one of the 41 locations on Central Park's newly updated audio tour, accessible from your cellphone via the Official Central Park App or by dialing the guide's phone number (LISTEN TO THE TOUR!). The most-accessed parts of the tour are the sculpture of Balto the sled dog (John Stoessel), Bethesda Terrace (George C. Wolfe), and the bronze Alice in Wonderland statue (Whoopi Goldberg)—but they're perennially popular locales, guide or no guide. Still, it can't hurt to have Brooklyn's own Oda Mae Brown on your side. Fun fact: All of the celebrities recorded the tour pro bono.

What to know: When you download the Central Park app for the tour, you'll also get interactive location-based maps of the park, event listings (many of them free), a souvenir shop, and an index of points of interest with photos (free app, free entrance to the park, 646-862-0997, centralparknyc.org).

Adding a very personal touch to the Valor in the Pacific National Monument, Jamie Lee Curtis reveals during the 75-minute USS Arizona Memorial audio tour that her father fought in the Pacific Theater during World War II. In her own words: "In 1945, he witnessed the Japanese surrender in Tokyo Bay from the signal bridge of his submarine tender, USS Proteus."

What to know: Head to the Pearl Harbor Visitor Center first; from there, you can walk to the USS Bowfin Submarine Museum & Park and take the Ford Island shuttle to the Battleship Missouri Memorial, the USS Oklahoma Memorial, and the Pacific Aviation Museum. Walk-in tickets are distributed on a first-come, first-served basis, so arrive early to boost your chances of getting in on the spur of the moment (free admission to the monument, audio tour is $7.50, nps.gov).

Last year, after St. Mary's Church introduced its two-hour audio tour featuring a slew of famous UK actors like Joanna Lumley and Hayley Mills, attendance doubled to 75 people per day, all eager to hear the celebrities describe the church's vibrant Medieval stained-glass windows in detail. (Rumor has it Sir Ian McKellan declined, as he's an atheist.) Churchwarden Mike Godsal says Lumley's portion of the audio guide is the most popular. Of course, that could be due to the fact that she voices the tour's introduction, but we like to think it's because everyone wants to hear booze aficionado Patsy Stone from Absolutely Fabulous talk about church.

What to know: All 28 windows date from 1501 to 1515, making St. Mary's the only church in the UK to boast a complete set. If you'd like a personal guided tour, contact the church office by phone or email (free admission, 01285-712611, stmaryschurchfairford.org.uk).

Okay, yes, NY Skyride, on the second floor of the Empire State Building, has only one Yelp star and is rated as a "terrible" "scam" on TripAdvisor, but die-hard Kevin Bacon fans who have $42 to blow are in for a treat. Take a seat in front of an 18-foot screen, and Bacon—or his voice, anyway—"flies" you around New York City in a "virtual tour simulator" contraption for half an hour. Worth the cash? Probably not. But if it this sounds like a blast to you, we won't judge.

What to know: Buyer beware. This ride is not affiliated with the Empire State Building Observation Deck, so try it at your own risk. Many travelers say they were suckered into buying a combination ticket by a street vendor outside the building's entrance, so understand what you're getting into before handing over any cash (admission $42, skyride.com).