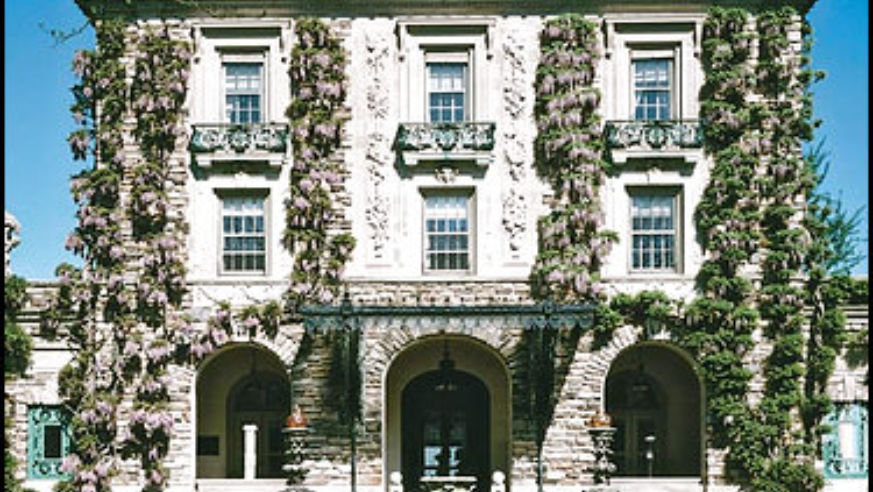 The walls are talking: what&nbsp;the guides won't tell you, from The Breakers in the East to Shangri La in the West

What you'll see With soaring views of the Hudson River Valley toward Manhattan, 25 miles to the South, Kykuit (pronounced kye-cut) is the hilltop centerpiece of Pocantico Hills, the 2,000-acre playground of the Rockefeller dynasty. The house itself is more architectural mishmash than streamlined marvel, with a neoclassical façade and romantic details on the interior. The real treasure is grandson Nelson's extensive modern art collection, including striking wool tapestries by Picasso, as well as important works by David Smith, Louise Nevelson, and Henry Moore, two of whose sculptures adorn formal gardens designed by William Welles Bosworth.

Pssst! The books lining one wall of the study are fake. Nelson, vice president in the 1970s, wasn't much of a reader--he preferred to unwind by watching TV shows like All in the Family.

Tip The three-hour Estate Life Tour ($34) adds an exploration of the nearby Stone Barns Center for Food and Agriculture, John D. Rockefeller Jr.'s 80-acre preserve of woodlands and sustainable farming (and home to chef Dan Barber's expensive but splurgeworthy Blue Hill at Stone Barns restaurant). The Hudson Valley website has info on the estate as well as train and boat tickets from Manhattan.

The Breakers in Newport, R.I.

What you'll see During the Gilded Age, Society summered in Newport, leaving behind several glorious mansions. The Breakers is considered the most magnificent, in part due to Cornelius' wife, Alice, trying to one-up her sister-in-law Alva's nearby Marble House. Family architect Richard Morris Hunt designed the 70-room palazzo after those found in 16th-century Genoa. Highlights include a 2,400-square-foot, two-story dining room in alabaster and gilded bronze, and the music room, constructed (furnishings and all) by artisans in Paris and reassembled on site. A behind-the-scenes tour, debuting in August, opens up the labyrinthine basement, among other areas.

Pssst! Cornelius died only four years after construction was completed, following a stroke suffered while fighting with one of his sons over money.

Built in 1938 by tobacco heiress and surfer girl Doris Duke.

What you'll see Oahu's most elaborate Spanish Mediterranean-inspired structure is where Doris Duke, known then as "the richest girl in America," hid from her money-grubbing relatives, and amassed one of America's premier Islamic art collections. Throughout much of her turbulent life, Duke found solace studying the order and symmetry of Near Eastern design (and purchasing it, of course). Highlights among her 3,500 objects: a 13th-century Iranian mihrab, or prayer niche, and an entire wooden room, carved and painted in Syria in the mid-19th century.

Pssst! At age 75, Duke adopted a 35-year-old Hare Krishna, Chandi Heffner. The two became estranged when Duke suspected Heffner of poisoning her food. Claiming a toothache, Duke said she was going to the dentist, but instead hopped her 737 to L.A. and had her staff boot Heffner from Shangri La.

Tip Opened to the public in 2002, Shangri La is still a tough ticket--advance reservations are a must (the 8:30 a.m. tour is the easiest to book last minute). There's also an extensive one on the website.

What you'll see The 56-room, prairie style-cum-English Gothic mansion, designed by architect William Van Tine, reveals Ford's taste for rustic hominess with cypress, oak, and walnut walls and staircases. The controversial industrialist retreated here as assembly lines at nearby Highland Park churned off scores of Model Ts every hour, minting him millions. Ford felt most at home in spaces beyond the main house--particularly the Thomas Edison--designed powerhouse, which generated hydroelectric power from the Rouge River and made the property self-sufficient; and of course, the garage, which holds six of Ford's historic car models.

Pssst! In his old age, Ford became increasingly eccentric. It's been said that he cultivated rust on old razors in his bathroom sink to use as a hair restorative.

Tip The on-site restaurant, in the room that once housed the Fords' 50-foot lap pool, is only open weekdays for lunch. Several dishes include soybeans, a crop Ford was fanatic about.

Built in 1817 by John Robinson, a shipping merchant, who sold it to cotton tradesman William Aiken Sr. in 1827.

What you'll see The prosperous Aikens clan kept the estate in the family for nearly 150 years. Over the decades, as the family's numbers dwindled, they sealed up rooms they no longer needed, beginning in 1898. Thus, much of the house remained untouched to this day: Faded paints, peeling wallpaper, worn carpets, and gaslight chandeliers all lend a time-capsule aura. Many of the original working outbuildings also survived--including slave quarters, a kitchen, and stables.

Pssst! In the first-floor parlors, the spots of gray paint on the walls aren't the result of aging. They're a remnant from the filming of Swamp Thing, Wes Craven's 1982 horror flick, parts of which were shot in the house.

Tip The $14 combo ticket also gets you into the nearby Nathaniel Russell House, a grand neoclassical building noted for its flying spiral staircase and elaborate plasterwork. And don't miss Charleston's sprawling Magnolia Cemetery, the final resting place of the Aikens, as well as many other grand families from the area.

Built in 1839 by Jacques and Evelina Bidermann (née du Pont). But the name worth knowing is that of her nephew's son, Henry Francis du Pont. He was born and raised in the house and inherited it when he came into the family's gunpowder fortune.

What you'll see Once a modest Greek Revival structure, the house went through several revisions until Henry Francis, an avid gardener and collector of American decorative arts, doubled its size in the 1920s to make room for his collection of 63,000 objects and furnishings. The collection of American decorative arts, dating from 1640 to 1860, now totals 89,000 pieces in 175 period displays. It's so valuable that 26 employees are certified as firefighters.

Pssst! Henry was neurotic about maintaining the furniture. In the 1930s, he hosted scores of weekend guests; those he considered careless got lesser-quality linens. And he often told them what couldn't be touched: One visitor was rumored to be so nervous, she slept in the bathtub to avoid disturbing anything.

Tip Henry took his flowers seriously; he maintained a weekly list of the ones in the height of bloom at the estate, a practice the gardeners continue today (call 302/888-4856 for updates). The nearby Hagley Museum, site of the family's early gunpowder mill, provides an explanation of how the du Ponts could afford all that art (hagley.org).

What you'll see Lest he land in the shadow of his siblings' palaces in Newport and Manhattan, this Vanderbilt took his share of the family fortune south--and outdid them all. Architect Richard Morris Hunt designed the 250-room French Renaissance--style château, a confection of Indiana limestone that featured early electric lights, indoor plumbing, and water channeled from a reservoir five miles away. Frederick Law Olmsted sculpted 75 acres of gardens. The public has been welcome since 1930, but in July, several rooms--including an observatory--open for the first time.

Pssst! Not all of Vanderbilt's guests left bowled over. A visiting Henry James once wrote that the château was "strange, colossal, heartbreaking...in effect, like a gorgeous practical joke."

What you'll see Jefferson made filling Monticello--"little mountain," roughly translated--his life project. Construction started in 1769 when he was 26 years old and ended when he was 66. It's the details that are most intriguing: Antlers in the entrance hall were a gift from Lewis and Clark; a bottle-sized dumbwaiter travels from the wine cellar to the dining room; a contraption copies letters as they're being written. Newly restored this year is the 1809 kitchen, an upgrade Jefferson started after returning from the White House.

Pssst! Jefferson considered his affair with slave Sally Hemings part of a therapeutic regimen using sex, exercise, and vegetarianism, according to Jefferson's Secrets: Death and Desire at Monticello, by University of Tulsa professor Andrew Burstein.

Tip The Presidents' Pass ($26) includes admission to Monticello, the 1784 Michie Tavern museum and restaurant, and Ash Lawn-Highland (President James Monroe's home). The pass is available at any of the museums or the local visitors center.

What you'll see The 165-room Mediterranean Revival palace was designed by architect Julia Morgan, and was a work in progress for 28 years. Its proud owner first brought in the world, shipping in European treasures such as Roman tapestries and a 400-year-old Italian carved wood ceiling. Then he brought in the stars, hosting Charlie Chaplin, Joan Crawford, and many others.

Pssst! On certain summer nights, after the tourists go home, the estate's employees (and a few of their guests) are given access to swim in the marble-lined, 345,000-gallon Neptune pool.

Tip The castle schedules evening tours in spring and fall--docents in period clothing act as though Hearst had invited them. For contrast, visit the nearby town of Cambria, home to the poor man's Hearst Castle. Nitt Witt Ridge, a 51-years-in-the-making hodgepodge of Busch beer cans and other discarded materials, was dreamed up by deceased eccentric Art Beal (805/927-2690).

Built in 1839 by J. T. Roman, a sugarcane planter and French Creole socialite, as a wedding gift to his bride, Celina Pilie.

What you'll see Two rows of 300-year-old live oaks line the quarter-mile drive from the Mississippi River up to the colonnaded Greek Revival mansion. (You may recall the view from Primary Colors and Interview with the Vampire.) Inside, guides in period dress--hoopskirts, Confederate uniforms--lead a half-hour tour focusing on the Romans' day-to-day doings, their elegant parties, and the courting traditions of the era. Afterward, visitors are invited to purchase mint juleps and relax on the porch and grounds.

Pssst! The romance between J.T. and Celina may have been less than steamy. Celina preferred to spend her time at parties in New Orleans, while J.T. stayed home at Oak Alley. He signed many letters, "Kiss the children for me. Your Friend, J.T. Roman."

Tip Oak Alley has simple accommodations in the late-1800s outbuildings--no phones or TVs, but there are flashlights for late-night graveyard tours (from $115, with breakfast).

Five more mansions that you may not have heard about

Some will recognize the Gamble House in Pasadena, Calif., as the domain of Doc in Back to the Future. But design junkies are far more impressed by the overall American Arts & Crafts style: stained glass, hand-finished oak, Burmese teak. The mansion was built in 1908 for David Gamble (of Procter & ...) by architects Greene & Greene (626/793-3334, gamblehouse.org, $8). In Natchez, Miss., a town rich with antebellum mansions, Longwood rises above, if only for its shape. It's the largest octagonal house in America--a fad in 1860, when it was designed by architect Samuel Sloan for cotton planter Haller Nutt (601/442-5193, $8). Confederate General William Giles Harding inherited his father's Belle Meade Plantation, in Nashville, and built a world-class 1853 Greek Revival mansion. After guided visits through the house, self-guided tours take in the slave quarters and storied stud farm stable (615/356-0501, bellemeadeplantation.com, $11).

At Lyndhurst, a romantic 1838 Gothic Revival castle designed by Alexander Jackson Davis, pointed turrets tower over the Hudson River Valley. Three powerful New York families lived there in the 1800s. The most famous resident was railroad tycoon Jay Gould, who preferred to take his yacht from New York City to Tarrytown rather than board a train owned by his nemesis, Cornelius Vanderbilt I (914/631-4481, lyndhurst.org, $10). Captain Frederick Pabst, a steamship captain turned brewmaster, financed the Pabst Mansion in Milwaukee in 1892 with proceeds from his company, which at the time was the world's largest manufacturer of lager. The 37-room Flemish Renaissance mansion demonstrates his taste for the finer things--including custom-built Louis XV-style furniture and 19th-century European oil paintings (414/931-0808, pabstmansion.com, $8).