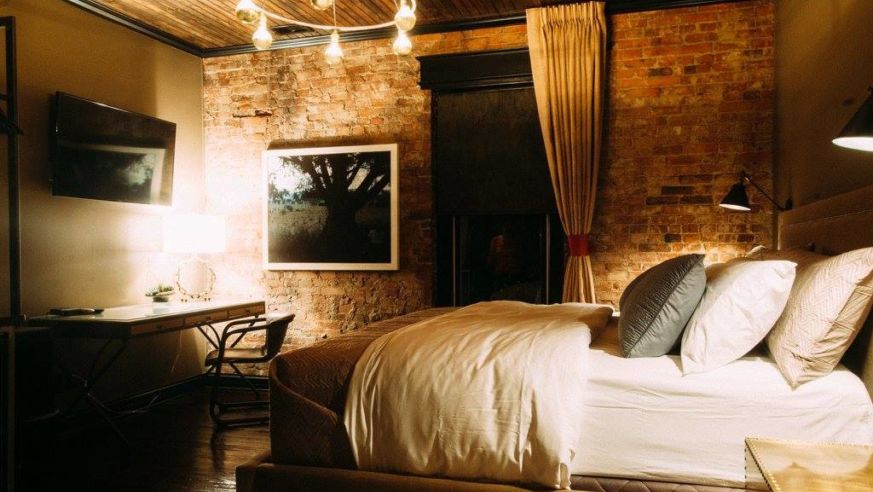 A quaint-looking "bed and beverage" with a funky soul and dynamite beer.

At most motels and hotels, if the restaurant is destination-worthy, it's an added bonus. At Gralehaus, in Louisville, KY, the dining option is a main focus, to the point where the locals who frequent the locally minded, beer-obsessed café often forget that there are lodgings upstairs.

The owners, Tyler Trotter and Lori Beck, partners in business and life, also own and run the Louisville Beer Store, which is two miles away. The couple has traveled through Europe extensively, and their Louisville B&B, which Trotter says stands for “bed and beverage,” is their way of further sharing their love for suds.

“We fly brewers in from around the world and sometimes we have a hard time finding them a place to say,” says Beck, explaining the inspiration for the place. “In our travels to breweries, especially in Europe, we appreciated that a lot of them have inns on the property, even above the brewery. Now we can show them a similar hospitality.”

Regardless of whether you’re in the industry, though, you have the option to purchase a beer or cider ahead of time so it's waiting in your mini-fridge when you arrive.

And in the spirit of a classic B&B, it’s self check-in and check-out.

Each of the three lavish yet cozy rooms, which features either a king-size or queen-size bed, is designed distinctly from the others. That's a matter of happenstance, Trotter says. It turned out that way because as they designed the rooms, they discovered how differently the natural light affected each space. There’s a cowhide rug here, a vintage record player there. But while they look unique, they all share the owners’ love for Louisville. A local interior designer made all the curtains and local artists’ works adorn the walls. The fragrant bath products come from Peace of the Earth, a nearby boutique specializing in eco-friendly products; and the books that line the shelves, all chosen specifically to suit the vibe of each room, were purchased at Carmichael’s Bookstore, a longstanding independent shop. And if that doesn’t impress you, consider the decadent chocolates in the room from Louisville’s Cellar Door, which once was the featured chocolate at the Emmy Awards.

Gralehaus is located in the Highlands, which is known as the oldest neighborhood in the city. It’s long been home to the city’s Restaurant Row. Today the whole area is jam-packed with bars and nightclubs, but standouts include Jack Fry’s, an historic restaurant known for its classic Southern fare and vintage photos of athletes, and Steel City Pops, an Alabama-based chain in the Southeast that peddles inventive popsicles made with fresh ingredients. There’s a Walgreen’s down the street. Street parking is available.

The ground-floor daytime café, a local hangout, features a fridge with about 75 bottled beers, from local brews to esoteric European options. There are also four taps and an extensive menu of coffee drinks. The from-scratch food leans Southern, but is thoroughly modern. (Think: country ham tartine, veggie hash, creative crepes.)

Beck and Trotter’s third business, Holy Grale, is an expansive beer hall in a church-like building that they opened in 2010. It’s right behind Gralehaus, so it’s really easy to hunker down with a brew or two and get back to your quarters without hassle. The only drawback is that with a bar outside and a cafe downstairs, it can get loud in the rooms, so each one is equipped with white noise machines.

Look for the tokens in your room when you arrive. Each can be used for one of the expertly crafted coffee drinks in the café.

Starting at $150. Extended-stay rates are available.