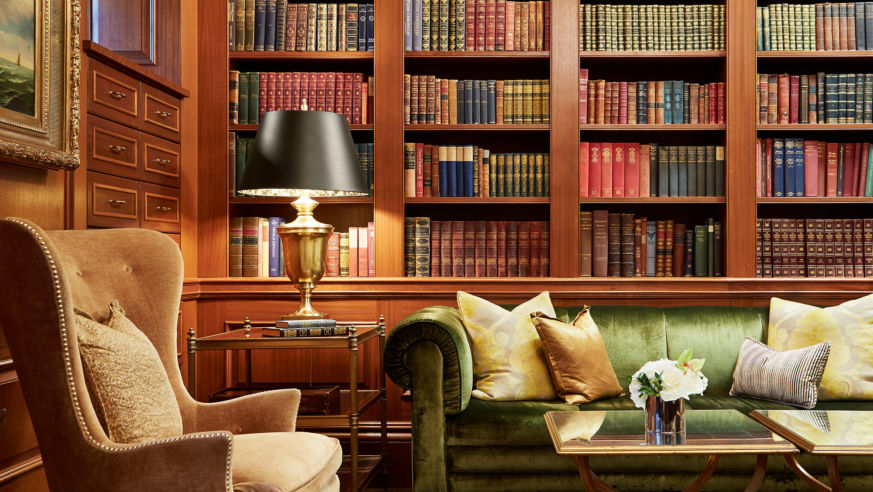 The Book Room at the Jefferson, Washington, DC.

The best part? These unique spaces are free for guests to use and peruse, whether you’re visiting Washington, DC, or relaxing in the British Virgin Islands — plus, the hotels often offer book-related freebies and opportunities for philanthropy.

Today (book)marks the kickoff celebration of National Library Week, the perfect time to have books on the brain. In the spirit of lifelong reading, we’re spotlighting eight of the world’s coolest, quirkiest hotel libraries — because nothing goes better with travel than a good book, especially when it’s free of charge.

Many of the hotels below have partnerships with local public libraries and literacy programs. However, if you’d like to support the cause without hopping a plane, consider donating to the American Library Association, a nonprofit that promotes literacy and library services in the U.S. and the world at large.

1. The Book Room at The Jefferson: Washington, DC

Antique, leather-bound books on Thomas Jefferson’s favorite subjects (think: ornithology, astronomy, horticulture, and arithmetic) are just begging to be opened fireside while you’re curled up on the cozy velvet sofa or wingback chair in The Jefferson’s Book Room. Kids can choose their own tomes from the First Library shelf, curated by the DC Public Library and stocked with picks like the illustrated Pom Pom Panda series and Danica McKellar’s math-themed reads. If your heart hasn’t gone mushy already, for each room reserved, The Jefferson sponsors the purchase of a book for the public library’s Books from Birth program, which gives enrolled children a free book every month until they turn five years old.

The Biblioteka at Conrad Cartagena is technically a restaurant, but the hotel takes its literature seriously. Colorful books that showcase local subject matter — like the work of Colombian artist Ana Mercedes Hoyos — line Biblioteka’s walls, and the hotel recently launched a series of literary programs centered on Cartagena’s history. Sit for a spell in Colombian Corner and read about the area while sipping complimentary Colombian coffee; listen to scheduled poetry readings beside the outdoor fire pit; imbibe at the weekly Libros y Licor book club; or embark on a historian-led literary immersion walking tour through Nobel Prize–winning author Gabriel García Márquez’s world. Sights on the journey include the university where Márquez began to write, and the colonial-era homes that provided the setting for his beloved novel Love in the Time of Cholera.

We promise we are not making this up: New York’s Library Hotel organizes its rooms and floors by the Dewey Decimal system. Each floor represents one of Melvil Dewey’s 10 classifications, and each room is a topic — décor and all. With 50 to 150 hardcover, theme-specific books to a room, your stay could turn you into an expert on a surprising subject. Find your inner Don Draper in room 600.001 (category: Technology, topic: Advertising). Request room 800.005 (category: Literature, topic: Fairy Tales) for a romantic rendezvous with your Prince or Princess Charming. There are plenty of places to read, including the lush, plant-filled rooftop terrace, with views of the New York Public Library. Book lovers won’t leave empty-handed, either: At check-in, every guest can select a free advance reader’s edition from Simon & Schuster. Prefer your e-reader? Download best-selling e-books gratis using Simon & Schuster’s Foli app. 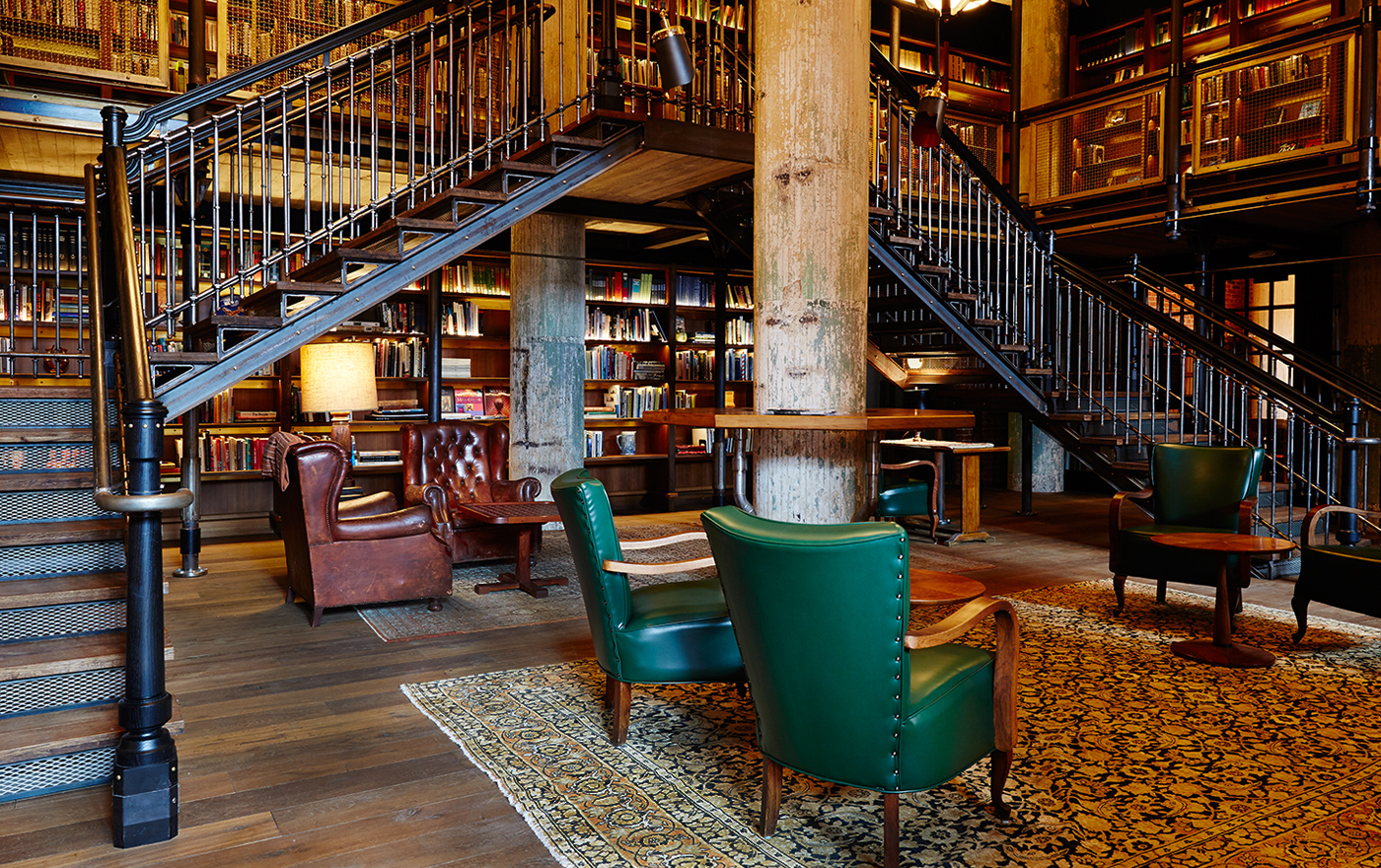 You’ll feel as though you’re starring in The Favourite — minus the book-throwing — when you luxuriate in the burgundy club chairs underneath the stately iron-and-wood-plank staircase inside Hotel Emma’s two-story library. Each of the towering space’s 3,700 volumes were handpicked by local novelist and anthropologist Sherry Kafka Wagner, co-creator of the San Antonio River Walk, from her personal library. The result of her mission is an eclectic, cerebral collection with a Southern twang, from William Faulkner’s As I Lay Dying to recipe books to an oral history of the Chernobyl nuclear disaster. The diversity, she once said, “allows people to find themselves.” Once you’ve located your perfect-bound soul mate, visit the concierge to borrow it on the honor system.

The sleek midcentury-modern library inside brand-new Baker’s Cay Resort is nice, sure. But the real draw for book lovers is the sandy outdoor path that connects to shaded spots, beach areas, and hammocks, a feature that pairs perfectly with the resort’s collection of classic paperbacks, many with nautical themes, including Ernest Hemingway’s The Old Man and the Sea and Robert Louis Stevenson’s Treasure Island. The combination is ideal for fulfilling that idyllic Florida Keys fantasy of dozing on and off while swaying in the breeze, a good book in hand. Hemingway would approve.

Fans of erotic novels might know The Heathman Hotel for its prominent role in E.L. James’ Fifty Shades of Grey, but its library spans multiple genres. Fresh off a recent renovation and topped with a crystal chandelier, the two-story wood-paneled Heathman Library holds 3,000-plus books signed by their authors, including Nobel Prize and Pulitzer Prize winners, U.S. Poet Laureates, and former U.S. president Jimmy Carter. Intended to serve as a modern-day European salon, the space hosts a reservation-only Russian Tea Experience on Saturdays, as well as author readings. And, yes, several E.L. James–signed copies of Fifty Shades are on the shelves.

This opulent Finger Lakes retreat — an 1833 stone mansion once home to a co-founder of the New York Times — combines history and nostalgia within the walls of its coral-hued library, replete with original marble fireplace. True to E.B. Morgan House’s history as a dormitory for students studying French at nearby Wells College, the collection features French language and art books as a tribute. Many of the mansion’s other reads are from the personal library of Pleasant Rowland, founder of the American Girl books and dolls, who owns the property. Look for hidden inscriptions: A number of the books were gifted to Rowland by their authors.

Opening this spring in the BVIs’ North Sound, the Marina Village at Oil Nut Bay eco-resort has a market, boutique shopping, and a coffee shop, but, more importantly, a Caribbean-themed library curated by Ultimate Library, a company staffed by book experts who create bespoke libraries for design-forward hotels around the world. Reaching beyond the resort’s boundaries, Oil Nut Bay and Ultimate Library donated an entire library to local Robinson O’Neal Memorial Primary School, which was devastated after Hurricane Irma.