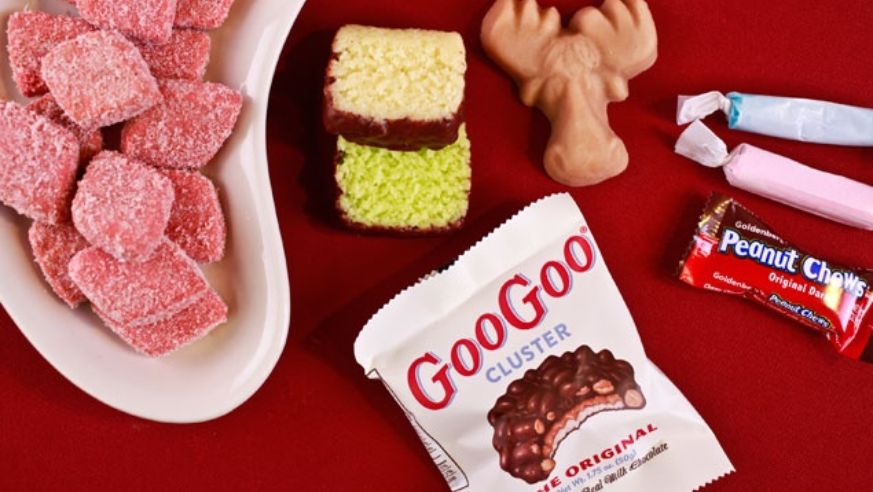 Satisfy your sweet tooth with these classic regional treats from around the country.

Ready for an all-American food odyssey? From east to west, you'll find unique—and irresistible!—regional treats you have to taste to believe. Oh, and if you're not up for an actual culinary trek across the country, we've got the 411 on how to get each and every one of these divine delicacies delivered directly to your door!

If you're like us, you consider travel an opportunity to taste. And we're not just talking metaphorically. We're talking about filling your plate with chicken and waffles, downing a bag of freshly fried pierogies, or asking for seconds of BBQ. We're not saying all eating rules are null and void on the road, but, y'know... That's why we put together this east-to-west guide to America's greatest regional treats. From Jersey Shore taffy to Hawaiian chocolate-covered macadamia nuts—with plenty of sweet spots in between—we've mapped out an all-American, binge-worthy tour you can take from the comfort of home.

Of the 13 billion pounds of Idaho potatoes grown annually, none are as sweet as these spuds: coconut-flecked dark chocolate surrounding a springy cocoa-flavored marshmallow center. No actual potato here! But like the venerable veg, they're nothing if not versatile. Melt 'em down for fondue or ice cream topping, whip them Bavarian style into a pie, or pop 'em in the freezer for a ice-cream-like treat—or, you know, straight out of the package just like folks in the Gem State have been doing since 1918.

Get it: The confection was invented by Boise's Idaho Candy Company, which offers tours of the factory and has a shop onsite. idahospud.com; $4.99 for a pack of six.

Honolulu's Ellen Dye Candies was the first to market the chocolate-dipped nuts back in 1927. The “Godiva of the Pacific” sold the company to Mamoru Takitani 33 years later. Under the new tiki banner Hawaiian Host, Takitani perfected the recipe and created a brand as iconic today as the crunchy milk chocolatey spheres are addictive. Descendents of the Dye family got back in the game in 2010 with varieties that include a touch of chili pepper, ginger, and sea salt all hand-dipped in haute chocolate made from locally grown and roasted cacao.

Get it: Order online from Waimea Chocolate Company (waimeachocolatecompany.com; from $8 for a six-piece box). Or find more mass-market brands—Hawaiian Host, Mauna Loa—anywhere and everywhere on the islands (around $6 for 14 pieces).

It's a story too sweet to be true. Legend has it that back in 1932 Los Angeles, See's Candies chef Louis “Gordy” Hooper wooed Bobbi in the packing department with a surprise gift of soft vanilla caramel and chocolate poured over toasted pecans, inspired by her pet turtles. It took off, and so did the lovebirds, forming their own company up in Oakland and delivering orders on a beat-up Harley Davidson (allegedly a gift/blessing from Mary See herself). The candies have survived, but alas, the meet-cute doesn't have legs.

Get it: Turtles went mass market and are sold in drug stores nationwide. For a more local version, See's sells the treats under the name pecan buds at the company's numerous old-timey, black-and-white stores on the West Coast. sees.com; $20.40 for a one-pound box.

Biscochitos in the north, biscochos in the south—or simply “that cookie grandma makes”—bizcochitos (with a “z”) were christened as America's first official state cookie in 1989. Anise and cinnamon combine with a touch of wine or brandy in these Latin-inflected shortbread crumblies, first introduced by Spaniards to then-Mexico in the 16th century and now a staple at Christmas celebrations as well as quinceañeras and weddings (the traditional diamond shape represents purity). The secret to the flaky melt-in-your-mouthness? Love. And lard.

Get it: Golden Crown Panaderia sells classic bizcochitos in their Albuquerque shop and online (goldencrown.biz; $4 a dozen in store; $16.95 a pound online) Osito's Biscochitos spices things up with a raspberry/habanero version (biscochitos.net; $39.99 for a 92-count tin).

When Necco closed shop in Milwaukee back in 2008, along with local factory jobs went Candy Raisins. The odd little gumdrops had been a local rite of passage since 1930: Yellow-tan with a wrinkly top, the taste was floral, honey-ginger perhaps, a mystery. Also a mystery: the name (there are no raisins in the mix). But, in a lesson for Occupy Sweet Street, devotees rallied, started a website, and inspired 7,000-plus to sign a petition—and it worked. Sort of. Using what is thought to be the last bags in existence, the people behind Osmanium Candy Company reverse-engineered a new version called Candy Sunshine. The fruits of their labor debut in March 2012.

When it comes to chocolate-covered-coconut, sometimes you feel like a nut, sometimes you don't. Down in Florida, the homespun creamy crunchy coconut squares offer bigger flavor decisions: plain, key lime, orange, mango, almond, or piña colada. Versions of the candy have been enjoyed for decades, but Orlando's family-owned Anastasia Confections took them from the home kitchen to the masses when it started boxing them up as Sunshine State souvenirs in the early '80s.

Get it: Brands like Anastasia are found in tourist shops and drug stores (anastasiaconfections.com; $5.99 for a nine-piece box). For a fancier, hand-dipped version, try Melbourne's Grimaldi Candies, near the beach (grimaldicandies.com; $10.85 for eight pieces).

Paul Bunyan might have dug the Grand Canyon out west, but down in the south, lumberjack folk hero Tony Beaver made peanut brittle. The legend goes that he stooped a flood by dumping peanuts and molasses into a river, not only averting disaster but also creating a tasty treat. It's one of America's oldest candies, one that soldiers survived on (and popularized) during the Civil War. January 26 was even declared National Peanut Brittle Day. And that's no tall tale.

Get it: Forbes Candies—an 80-year-old institution—sells their classic peanut brittle at five shops in Virginia Beach. forbescandies.com; $5.99 per pound.

From America's archetypal seaside resort comes the quintessential beach treat. Although businessmen like Joseph Fralinger and Enoch James built a boardwalk empire out of the pastel-hued chews, legend has it the first pieces were sold in 1883 after a tidal surge swamped David Bradley's Atlantic City candy shop, soaking his stock of taffy in sea water. Later, when a young girl came in and asked for a bag, he sarcastically told her to help her herself to the “salt water taffy.” You, and your dental fillings, won't be surprised to hear that the name stuck.

Get it: Fralinger's Original Taffy and James Candy carry more than 40 flavors of taffy at shops up and down the Atlantic City boardwalk jamescandy.com; $5.95 per pound in stores or $8.99 per pound online.

From the Algonquin sinzibukwud (“drawn from wood”) to today's Grade A, maple syrup has been a staple since pre-colonial times. The simplicity is refreshing. One ingredient: sugar maple sap. One process: boiling. Keep the boiling going and you get sugar, which is compressed into leaf shapes and enjoyed in all its tooth-aching glory. Maple sugar is actually twice as sweet as regular sugar, so much so that sour dill pickles make a great accompaniment. Trust us!

Get it: Family-owned since 1782, Morse Farm Maple Sugarworks sells the candies in the shape of leaves, hearts, and even rabbits (morsefarm.com; $8.95 for a 12-piece box). Alas, they don't carry pickles.

Goldenberg’s Peanut Chews were the original PowerBar, back when candy was considered a low-cost nutritional supplement (anyone remember Sperry’s Chicken Dinner bar?). The chews were formulated in 1917 for ration boxes, and four years later these gobs of rich molasses and peanuts all slathered in dark chocolate were wrapped up for the general public and sold as Chew-ets. They've been a hit ever since.

Get it: The Peanut Chews are easily found at most gas stations and grocers, particularly around Philadelphia, and online. candyfavorites.com; $24.83 for a 24-count box.

Who knew creamy frosting smooshed between two moon-shaped pieces of chocolate cake could engender such controversy. Is it a cookie, a pie, or a cake? Did German immigrants in Maine invent it in 1925? Or did the name instead come from Pennsylvania Amish farmers who would find their rival version in their lunch pail and shout “whoopie!”?  Well, in 2011 the Maine legislature fired the first shot, naming the whoopie pie the Official State Treat. Your move, Pennsylvania.

Get it: The treats are found at shops all over the state, but Labadie's Bakery claims to have baked the original back in 1925 (whoopiepies.com; $26.95 per dozen). Oprah approves of Wicked Whoopies (wickedwhoopies.com; $26 per dozen).

Said to be the first-ever combination candy bar, this choco-covered sugar bomb of caramel, marshmallow, and peanuts was once promoted as a “nourishing lunch for a nickel.” That was way back in 1912, and for its centennial Goo Goo Clusters got a makeover. Out with milk chocolate shortcuts (i.e. no more additives and partially hydrogenated oils), in with fluffier nougat, slicker packaging, and real pecan chunks in a Supreme version. Many in Nashville think its name is in deference to the Grand Ole Opry (GOO), but company lore nods towards babes: a candy so good they'll “ask for it from birth!”

Get it: The candies are deliciously ubiquitous and can be picked up at Cracker Barrels and Kroger markets throughout Tennessee as well as most tourist shops in Nashville. googoo.com; $3.95 for a three-pack.

Pralines (praw-LEENS) are to the south what maple candy is to the north, a sweet to celebrate the local plenty. In this case, sugar cane and pecans (puh-CAHNS). French settlers in the 17th century brought over the treat (named for diplomat Caesar du Plessis-Praslin) and soon swapped out the traditional almonds for the local nut. The secret to the deconstructed candy is to combine the milk, cream, sugar, butter, and nuts together in one pot and scoop the mixture onto a marble slab. No secret to sweet-toothed New Orleans locals: Samples are easy to come by.

Get it: Swing by Southern Candymakers when you are in New Orleans for handmade pralines and other chocolate treats (southerncandymakers.com; $21.95 for a one-pound box). And yes, they give out samples.

Thanks to the official state tree, Ohio is known as the Buckeye State, and the famed Ohio State athletics teams battle as the Buckeyes. So it should come as no surprise that the favored regional sweet has the same moniker as the tree's shiny nut. Buckeyes (which, like the nut, are named after their resemblance to the eyes of a white-tailed deer) are a peanut butter mixture dipped into chocolate. Just don't mistake it for the real thing; the latter is toxic (and markedly less delicious).

Get it: Visit Schmidt's Fudge Haus in the German Village outside Columbus to see buckeyes being handmade. schmidtsfudgehaus.com; $10.99 for a half-pound box.

An immigrant success story for our taste buds, Aplets & Cotlets were the brainchild of Armenian fruit farmers at Liberty Orchards in Cashmere, Washington. When faced with a surplus in their orchard, they turned to their homeland for inspiration. The result: a new take on Turkish Delight featuring walnuts jellied with apple and apricot (“cot”) juice instead of the traditional rose water. More than 90 years on, the sugar-dusted Confection of the Fairies draws about 80,000 pilgrims a year to the orchard, and once wrangled with the nutty-toffee Almond Roca over official state candy status. The fight ended at an impasse.

Get it: Liberty Orchards is where to go for the original creation, as well as varieties like pineapple, cranberry, guava, and rose-pistachio. libertyorchards.com; $9.50 for 16 pieces.