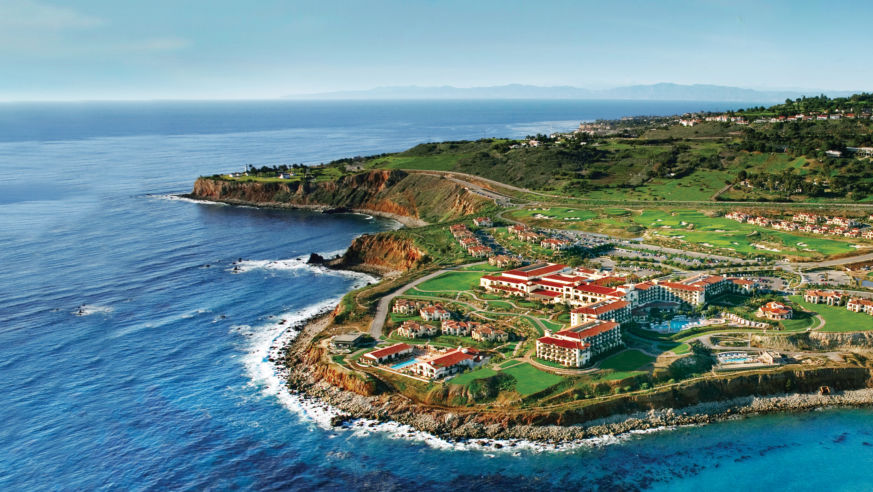 Once upon a time, when you booked a hotel, the key things to look for were location, amenities, dining options, and wifi. These days, however, savvy travelers are increasingly attentive to how to plan a getaway without leaving a huge footprint on the local community, not to mention on the planet. Hotels are stepping up and investing money and time to upgrade their facilities so they're more energy efficient, and to work with local farms and organizations to make sure products are locally sourced and nothing goes to waste. Here are just a few of the many examples of hotels that are being as attentive to the earth as they are to guests. 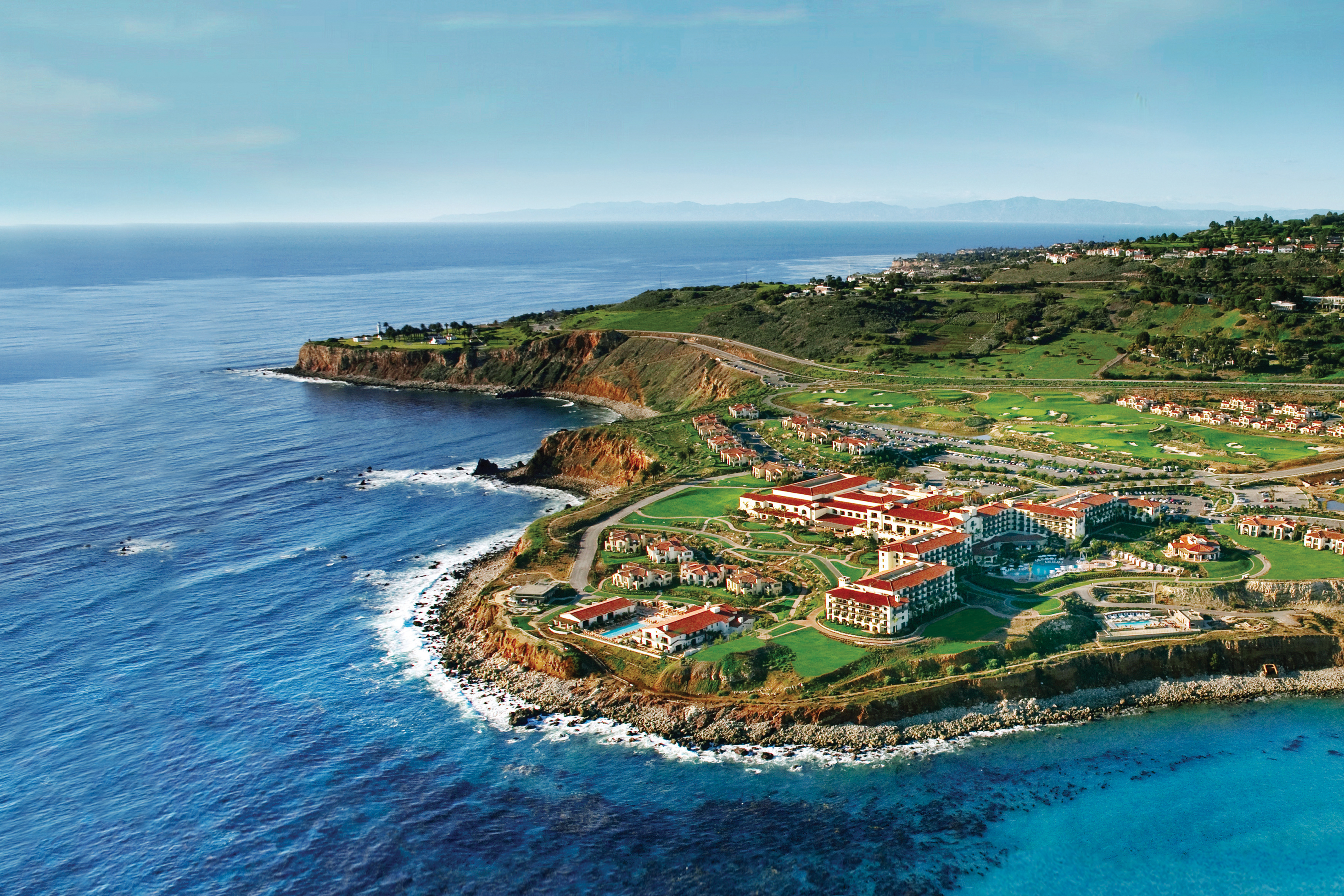 Terranea, a 102-acre resort on the coast of Southern California, diverts 80 percent of its waste from landfills through a thorough sustainability program that includes a strong emphasis on food waste recycling. That makes it one of the most comprehensive recycling programs in the vast Los Angeles area. Speaking of food, seasonal dining menus with local, organic products are the M.O., honey is harvested from the resorts garden, and the chef even harvests his own sea salt from an on-site sea salt conservatory. They’re equally attentive to water use, channeling waters from wet ponds and vegetated wetlands to irrigate its vast property. Those wetlands, moreover, are a habitat for native avian species. In addition to these systemic measures, there’s a serious attention to detail, from biodegradable golf tees to employee uniforms made of bamboo or organic materials. 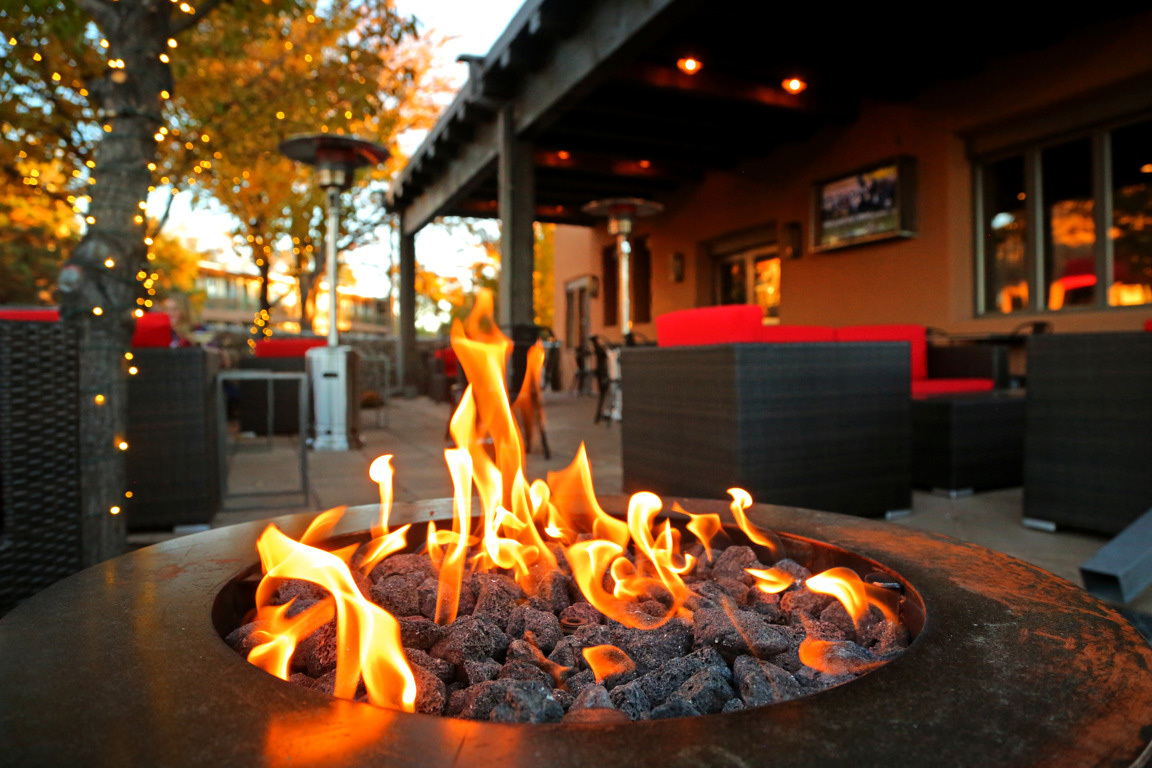 You could say that the green experience at the Sage Inn in Santa Fe, New Mexico starts before you even walk through the doors. The hotel is located across the street from the Santa Fe Farmers Market, which is widely recognized as one of the country’s best. The hotel itself is staffed by employees who regularly participate in trainings about sustainable practices. The facility follows stringent conservation practices, including use of high-impact water-saving systems and 100 percent energy efficient lighting, not to mention use of nontoxic cleaning products and recycled products. In 2016 they scored the Tier Two Silver Silver level of the Santa Fe Green Concierge Certification program, overseen by HospitalityGreen’s, and with new practices being implemented regularly, Tier Three Gold level could be in the stars. 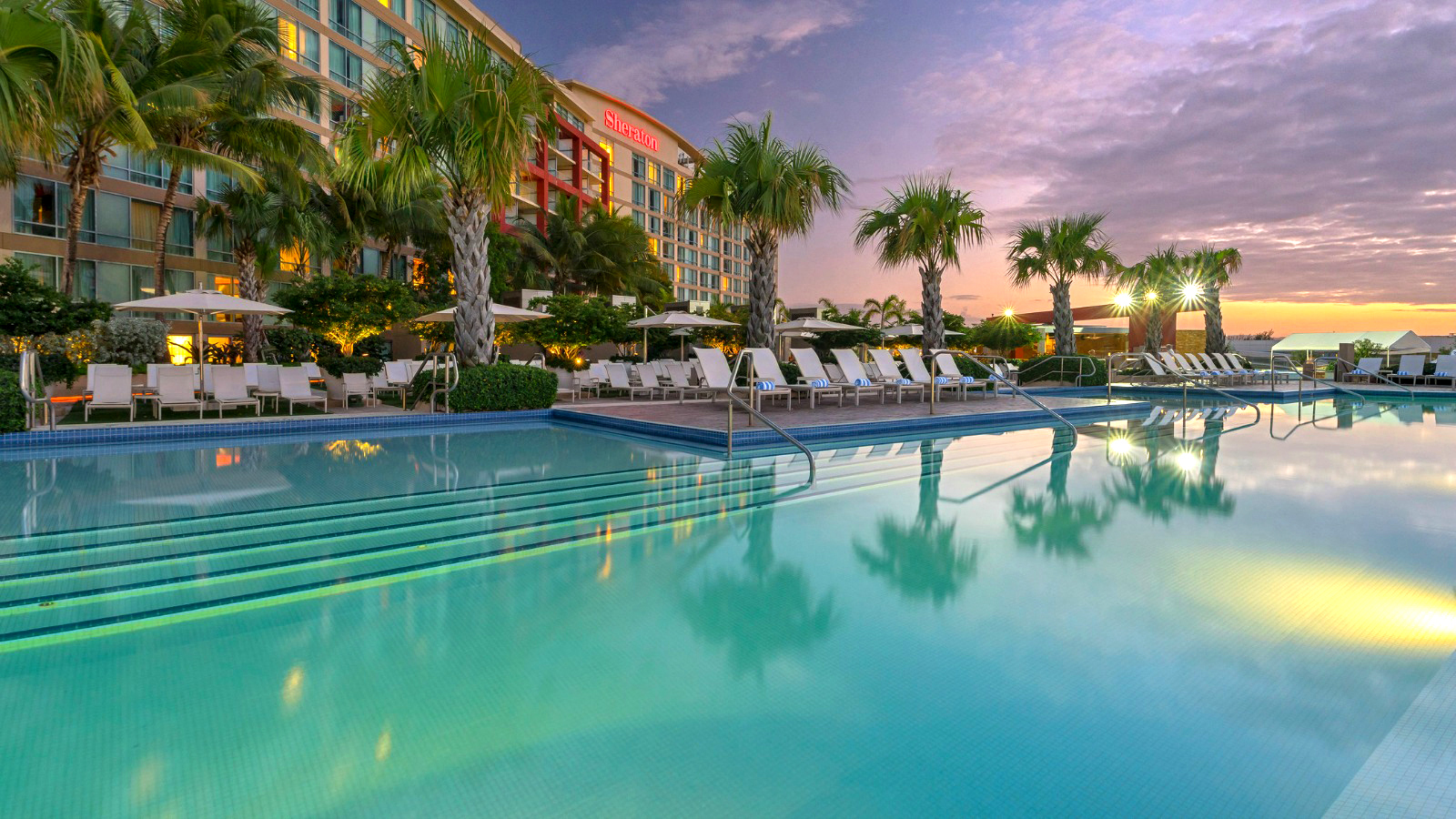 Few hotel brands are better known than Sheraton. That’s why it was a milestone when the Sheraton Puerto Rico Hotel & Casino became the first of all the Sheratons in the world to receive the prestigious LEED certification. Among the many measures to earn this prestigious accreditation are the property’s “cool roof,” which lowers the building’s temperature (a huge energy-saver given the tropical heat), a closed-loop system that converts food waste to fertilizer, which is used in the garden that supplies the hotel’s kitchens, and a water-filter system that traps sediment so it can run clean water into the sea. What’s more, if you happen to be on the beach and your phone runs out of battery before you take a selfie to send to your friends at home, call on the hotel’s so-called Energy Butler, which uses wireless chargers to refuel batteries to guests’ mobile devices on and off the property. 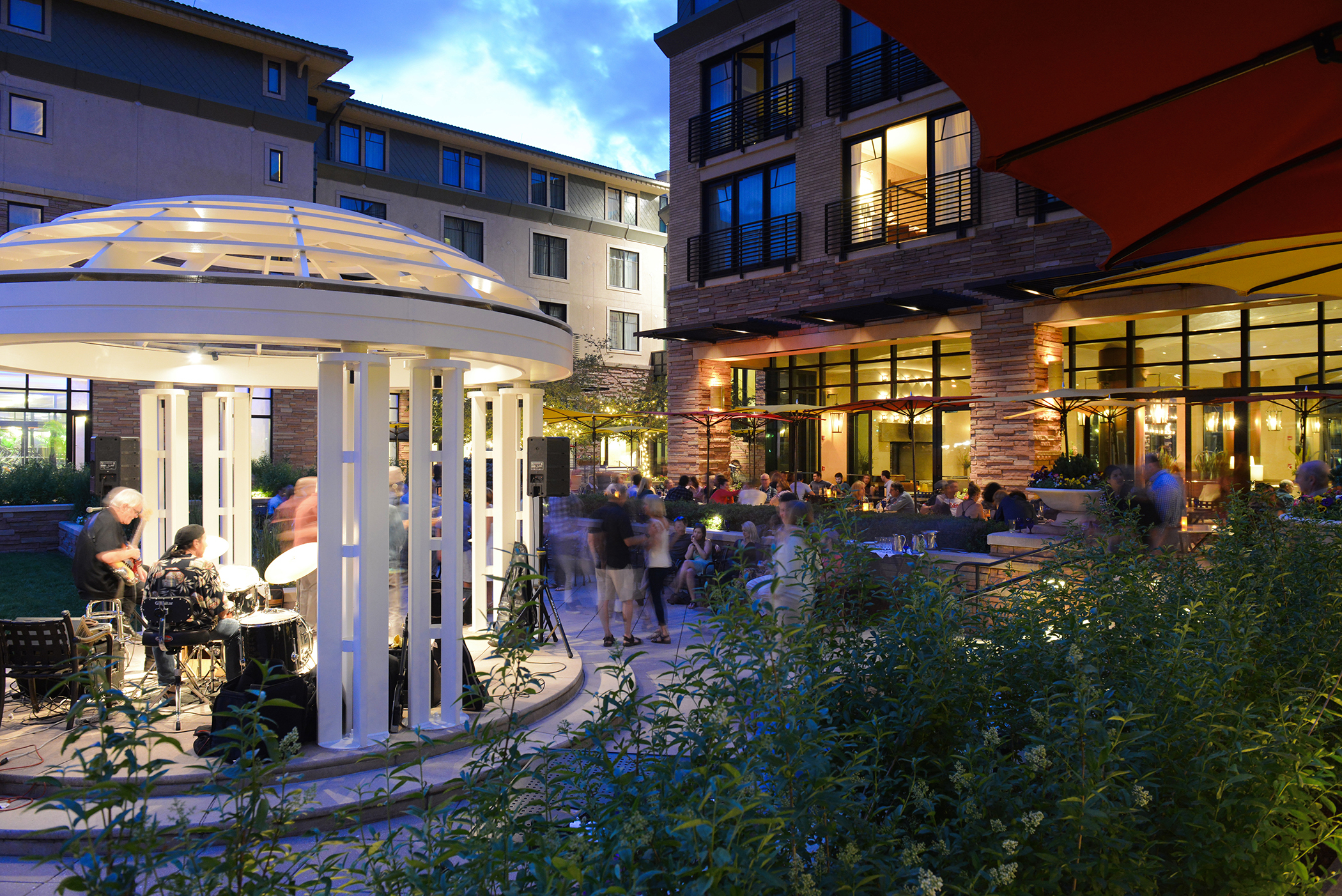 St. Julien Hotel & Spa in Boulder, Colorado, composts up to 20,000 pounds of materials a month. Also, thanks to its work with a Clean the World, local nonprofit, it’s donated more than 10,000 pounds of amenities and products—soaps, bedding, candles—to relevant local charities. Now, for context, consider that an African Bush Elephant weighs about 13,000 pounds. Yes, that’s a lot of recycling and reuse, and it accounts for close to 80% of the 201-room hotel’s would-be waste. Even the Colorado Department of Public Health and Environment has stepped up to recognize these and other environmental efforts. But that’s not where St. Julien’s community involvement ends. They regularly partner with other nonprofits to host community events. On America Recycles Day, they teamed up with local groups Blue Star Recyclers and PCs for People to collect more than 1,000 pounds of donated computers. 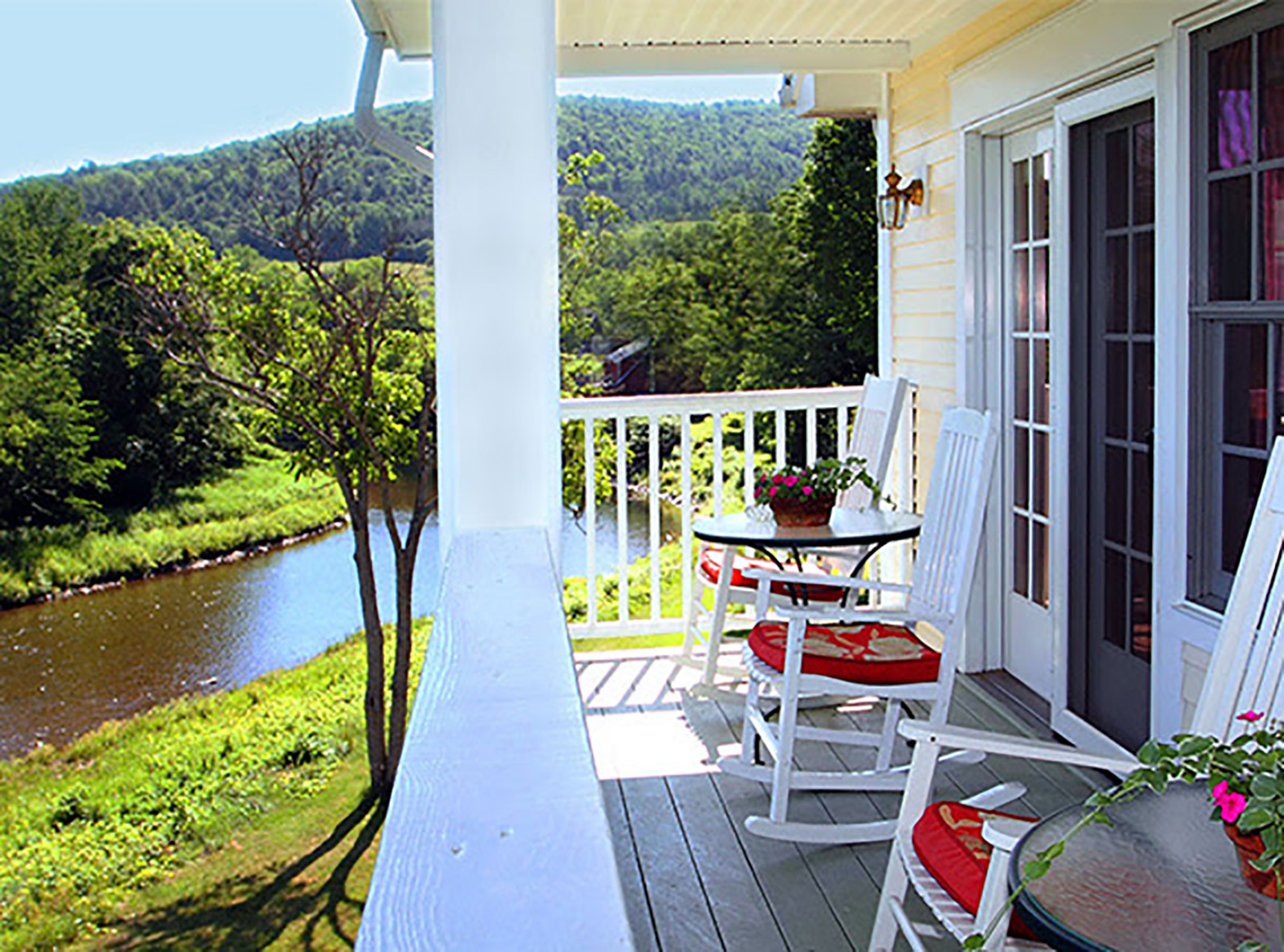 Numbers don’t lie. When you break conservation efforts down to numbers, the sheer force of the green initiatives at The Shire in Woodstock, Vermont are overwhelming and well deserving of its recognition as a Green Hotel by the Vermont Department of Environmental Conservation and the Vermont Small Business Development Center. For instance: 135 photovoltaic panels that generate over 42,000 kilowatt hours each year and a solar hot-water-generating system that generates over 32,000 BTUs of heating capacity annually, and several tons of of yard and landscaping waste get composted annually. And, of course, there’s a comprehensive recycling program, eco-friendly cleaning products, and rain water collection barrels that store irrigation water. After all, this is Vermont. 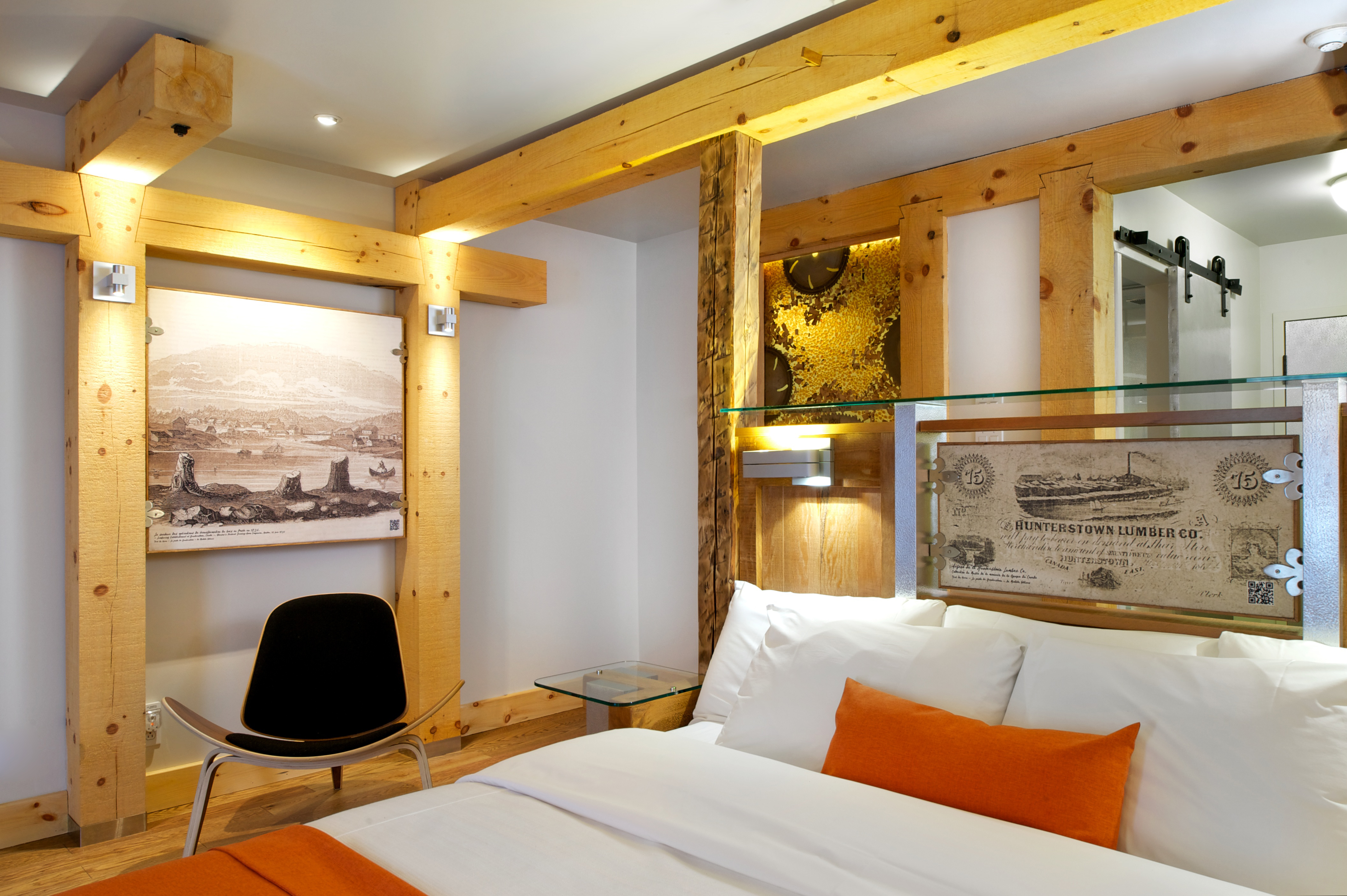 You know the old saying: One person’s trash is another’s….hand-woven reusable bag. Le Baluchon, a self-dubbed “eco resort” in Quebec’s Saint-Paulin neighborhood, is particularly creative with its recycling efforts: when an employee brings in a plastic bag, it goes to local artists who weave the would-be trash into nifty reusable bags that are sold at the Au bout du monde Eco-café, the resort’s rustic, organically-minded eatery. What’s more, a lot of hotels recycle, but Baluchon actually has its own recycling center. And thought it takes all materials, but guests often see the second life of paper, which is recycled into notepads. Its list of other green-minded measures is long and wide-ranging, from investing $1.2 million in a wastewater management system to developing a computerized energy management plan to sending used cooking oil offsite to be processed into biodiesel fuel.  And speaking of fuel, in an effort to cut back emissions onsite, no motorized activities are allowed on the property. 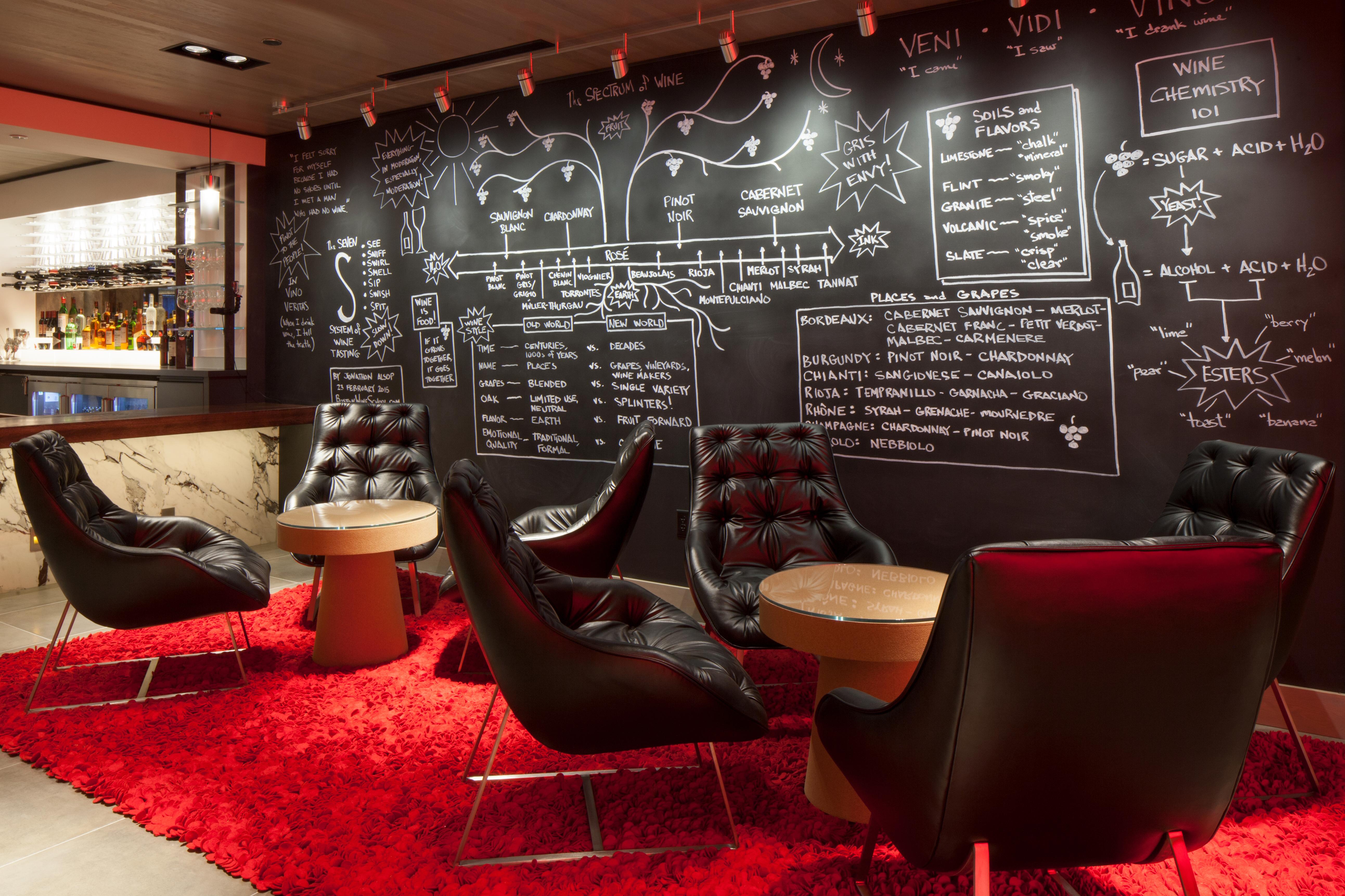 Sometimes it’s the little things that make the biggest impact. Small things, like putting divided trash bins in each room so guests can separate trash from recycling and offering guests to turn down turndown services boosted the Hotel Vintage Portland, a Kimpton property in Oregon, from a 44 rating to 62 on the notable Energy Star Scorecard since 2008 to 2012. But the hotel didn’t just leave the responsibility to its visitors. In 2016, the hotel, which is retrofitting into an historic building, invested $16 million to upgrade its various mechanical system to improve efficiency, from installing efficient boilers, replacing heat pumps, and retrofitting HVACs. The result: it pushed up the score from 62 to 85 in just one year. 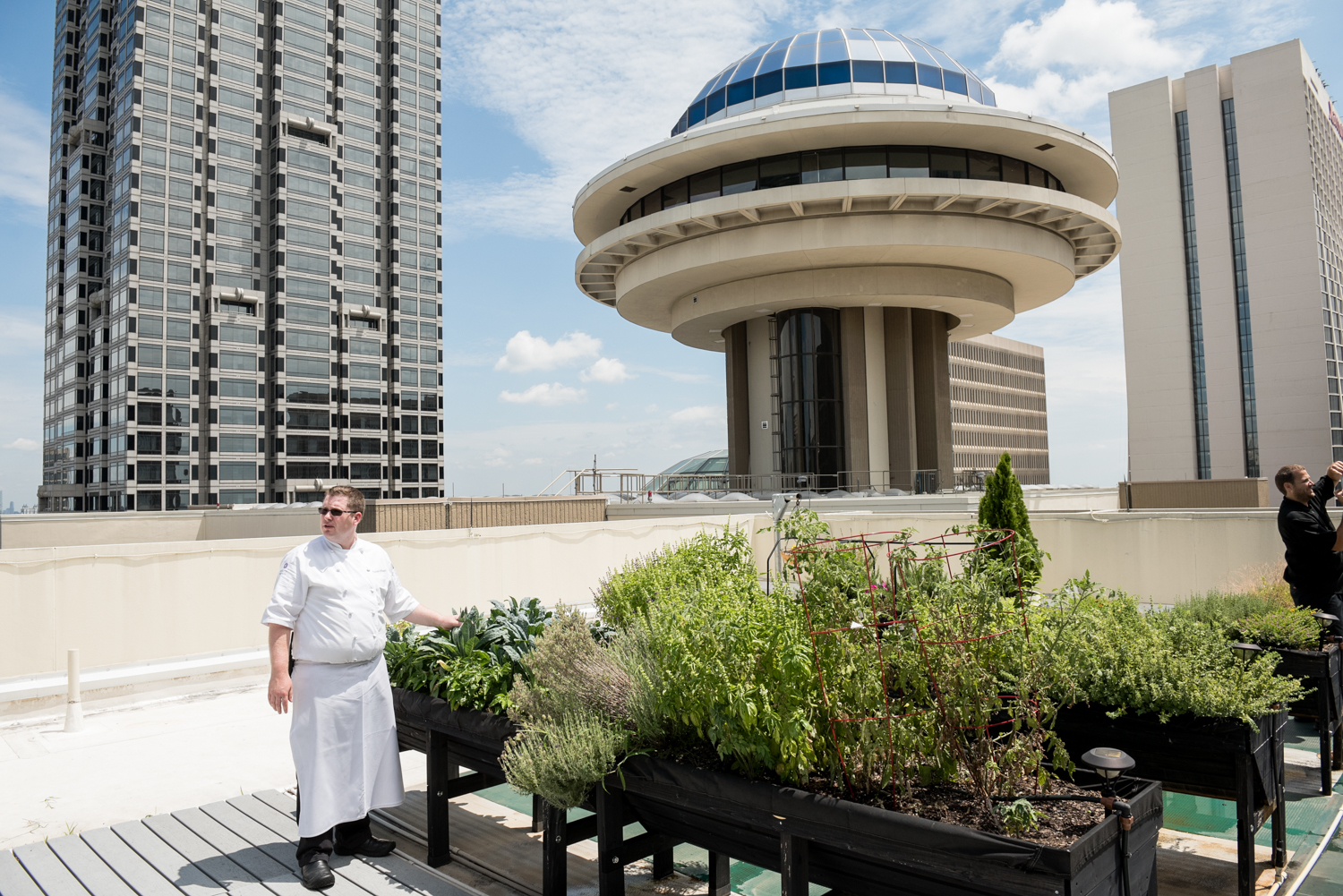 We’ve heard lots about the boom in urban gardens in the last few years. Usually it’s a reference to a plot of shared land close in a public park or plot of land in an inner city area. In Georgia, however, arguably the most spectacular urban garden is on the roof of the Hyatt Regency Atlanta. It sits 25 stories above Peachtree Street, a bustling and historic thoroughfare in downtown, and it’s fertile ground for tomatoes, peppers, and a variety of other veggies and herbs that chefs in the hotel’s three restaurants—Polaris, Twenty-Two Storys, and Sway—use in their kitchens. There are also beehives, which the hotel upkeeps in partnership with the Metro Atlanta Beekeepers Association, for honey used in the restaurants and sold in the Hyatt’s 24-hour market and coffee shop. 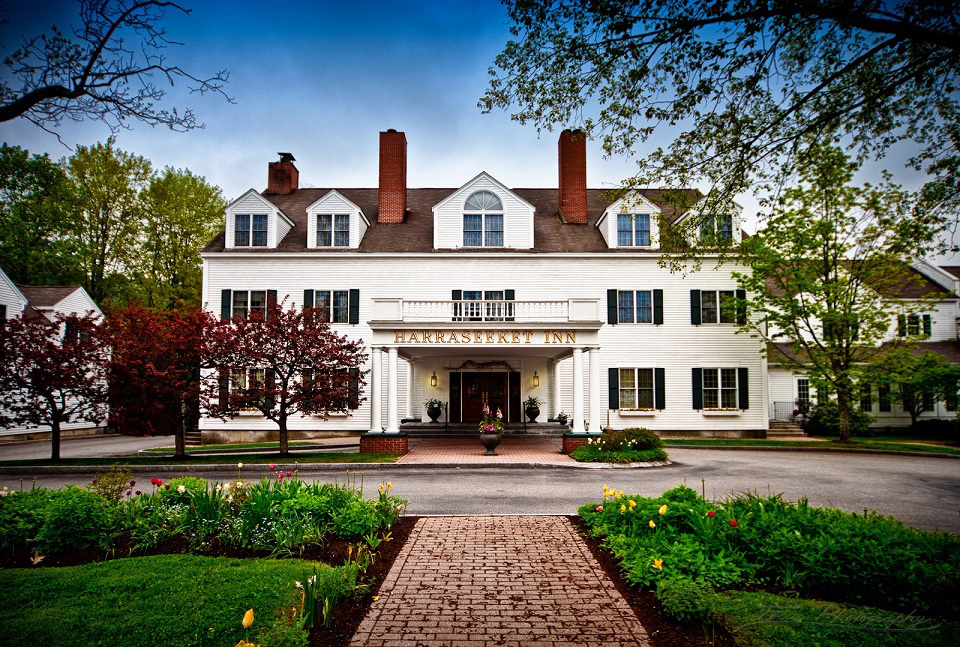 Harraseeket Inn, right outside Portland in Freeport, Maine, is the ideal model of locavore culture. The family-owned luxury country inn does its part to help the community—and the planet—by buying almost entirely local for its restaurant and tavern. That means supporting local sustainable fisheries, baking with Maine flour, and buying hormone-free dairy as well as meat and poultry that’s mindfully raised. But it doesn’t end when the meal is over. They work with a local farm for composting and they use a biodiesel reactor to turn used fry oil into 40-gallons of biodiesel fuel each week. That’s what powers their John Deere tractor, Mercedes station wagon, and Chevrolet pick-up truck. 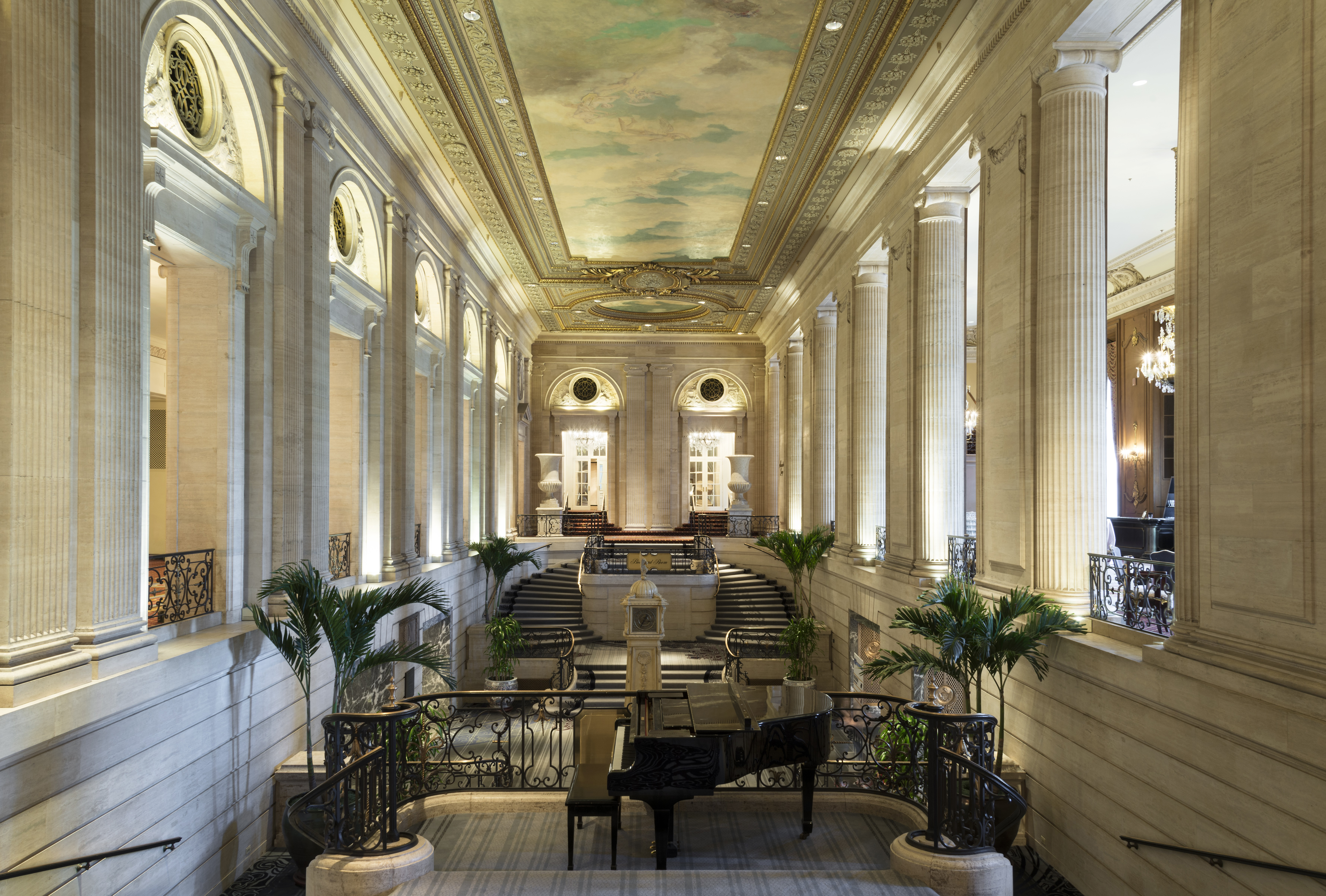 Chicago is arguably one of the country’s most exciting culinary destinations, so it makes sense that the Hilton Chicago’s environmentally-minded, high-impact initiatives are largely focused on food and committed to community. To wit: in addition to partnering with sustainable hotels in the Midwest, the hotel teams with Windy City Harvest, a nonprofit that employs teens from low-income communities to teach them about urban agriculture. Those young people develop the rooftop farm and beekeeping facility that supplies the restaurants. 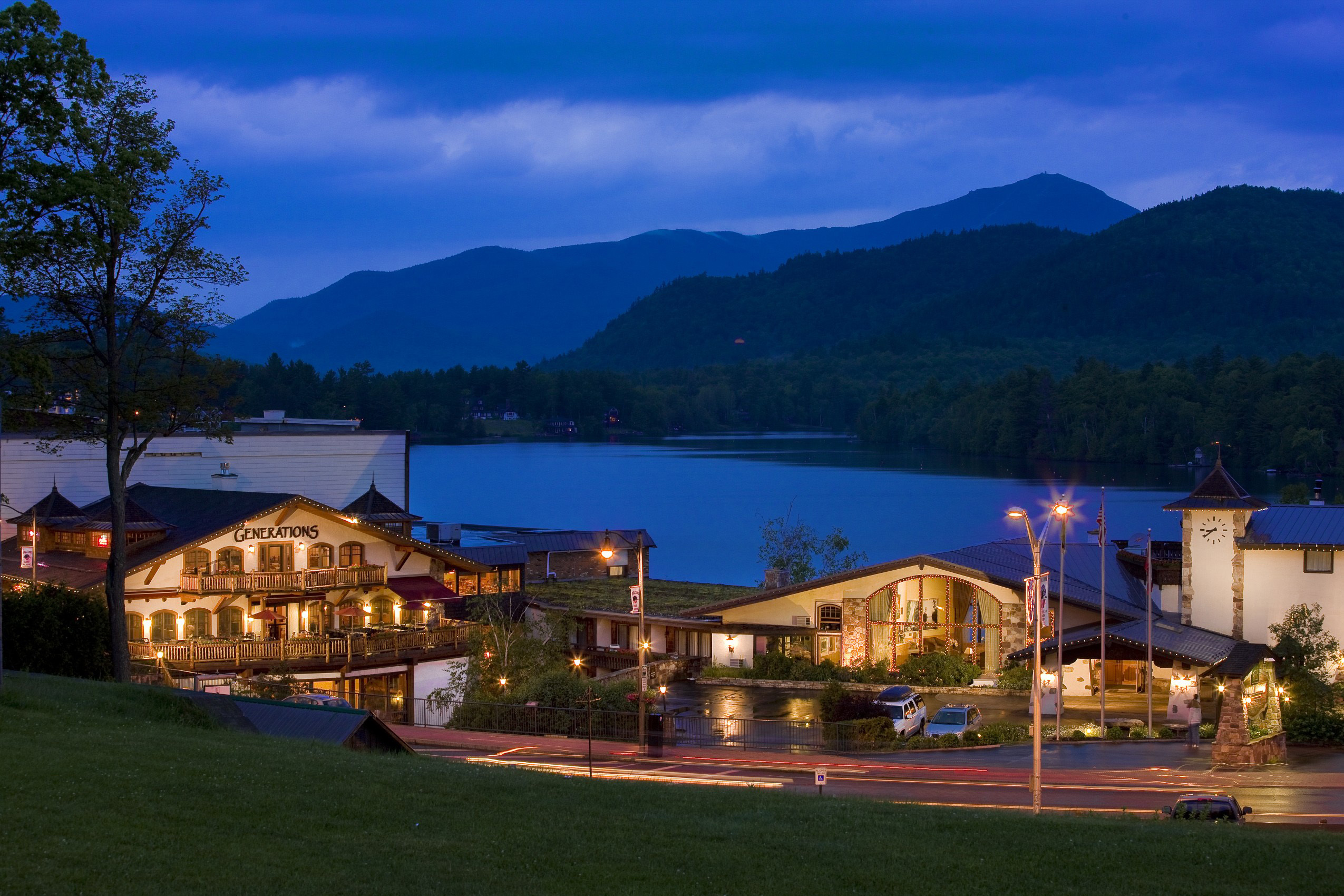 Lake Placid in upstate New York can get pretty frigid in the wintertime, especially on the shores of Mirror Lake. With its 3,400-square-foot green roof that serves as insulation for the building, Golden Arrow Lakeside Resort is well equipped to keep guests warm without much waste, while solar panels on an adjacent roof are the heat source for the laundry service and hotel pool. Situated within the sprawling 6 million acres of Adirondack Park, the family-owned hotel was the first of six American resorts to score the ultimate platinum designation in Audubon International’s hotel eco-rating program. The rooftop herb garden, reserved parking spots for Hybrids, and an in-room recycling program that helps sends an estimated 486 cubic yards of waste off to be recycled each year are just a few of the other factors that earned it that prestigious recognition. 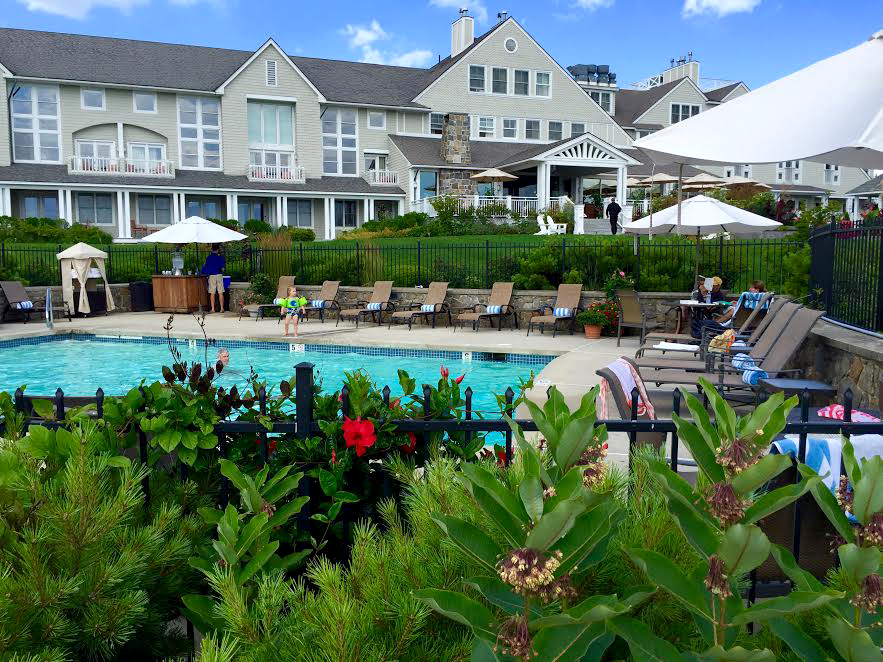 (Courtesy Inn by the Sea)

From solar panels to recycled cork floors to a salinated cleaning system for the pool, the Inn by the Sea in Cape Elizabeth, Maine (just outside Portland) boasts a variety of design features that demonstrate why the beachside resort earned its prestigious LEED Silver level certification as well as recognition from the state’s environmental agencies. But more than that, it’s the things that guests do at the sprawling 61-room hotel that really drive home its owners’ commitment to the planet and community. In the warm weather, for instance, a local naturalist offers “beachecology” walks and the property’s head gardener leads classes about cultivating indigenous gardens that can create room and board (ie: habitat and food) for wildlife. Year-round, they work with the Animal Refuge League of Greater Portland to temporarily foster dogs at the hotel, each of which is ultimately adopted by guests. They’ve seen 73 dogs off to permanent homes so far.