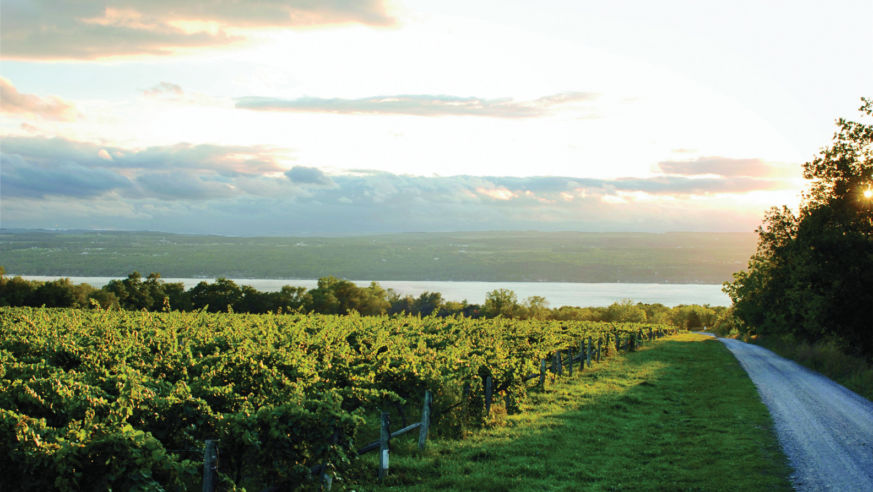 From coast to coast and across the heartland, America produces some of the best wines in the world. Here, we honor six lesser-known areas where Americans are making beautiful reds and whites. PLUS: We pick a great affordable winery in each state!.

Even wine production is bigger in Texas. Take Hill Country, a 14,000-square-mile expanse in the center of the state. With 32 wineries, it’s America’s second-largest AVA (American Viticultural Area, or grape-growing region with unique geological features)—and one of the nation’s fastest-growing, too. Vintners can thank the hot, dry weather, which is perfect for growing Mediterranean-style grapes such as tempranillo and syrah.

Visit: One of the state’s oldest wineries, Becker Vineyards has had its bottles opened at both the Super Bowl and the White House (beckervineyards.com, tastings $10, open daily).

Eat: At Cooper’s Old Time Pit Bar-B-Que, the meat is smoked for five-plus hours over mesquite coals and sold by the pound (coopersbbq.com, pork ribs $11 per pound).

Do: Grab an inner tube and hit the horseshoe-shaped Guadalupe River, where you’ll find the locals floating away their lazy summer days (shantytubes.com, four-hour tube rental $15).

Stay: Fredericksburg’s Full Moon Inn plays up the town’s German roots with its breakfast menu of sweet-potato pancakes and German sausages (fullmooninn.com, from $150).

It’s roughly halfway between San Francisco and Los Angeles and 240 miles south of Napa, but “Paso,” known for its zinfandel and syrah, might as well be on another planet. It’s uncrowded, unpretentious, and, best of all, unlikely to drain your wallet. Most of its small, family-run wineries charge just $5 to $10 to taste six wines—if they charge at all.

Eat: Farmstand 46 in Templeton embodies Paso’s agricultural bent, growing much of the produce that tops its wood-fired pizzas (farmstand46.com, pizzas from $10).

Do: Tour the olive mill at Pasolivo, a local farm that’s been pressing handcrafted oils for over a decade (pasolivo.com, tours and tastings free).

Stay: The just-remodeled Paso Robles Inn has a heated pool and a central downtown location (pasoroblesinn.com, from $141).

It’s been more than 200 years since Thomas Jefferson planted vineyards at Monticello. Now, with six AVAs and 206 wineries, Virginia is the country’s fifth-largest producer of wine—including some of the best Viognier made outside of France’s Rhône Valley.

Visit: Built on the grounds of a Thomas Jefferson-designed mansion and owned by Italian winemakers, Barboursville Vineyards is one of the state’s most renowned wineries (barboursvillewine.com, tastings $5, open daily).

Do: Explore Monticello, which contains Jefferson’s furniture, art, and books (monticello.org, tour $24), and scope out the University of Virginia, which he also designed (virginia.edu, tours free).

Stay: Guest rooms at Dinsmore House Inn are named after presidents (including Madison, Monroe, and, yes, Jefferson) and have hand-carved mahogany beds (dinsmorehouse.com, from $109).

This low-key Michigan spot sits on the 45th parallel, which also happens to run through France’s Bordeaux region. Adding to the peninsula’s appeal: an exploding food scene (Mario Batali owns a home here) and powdery beaches.

Eat: The Cove serves local seafood several ways, including in pâté form and as a garnish for Bloody Marys, a Batali favorite (thecoveleland.com, Bloody Mary $12).

Do: Take in the 64 miles of public beach at Sleeping Bear Dunes (sleepingbeardunes.com).

Visit: Unlike many wineries, Hermann J. Wiemer Vineyards harvests all the grapes for its celebrated Rieslings by hand (wiemer.com, tastings $3, open daily).

Eat: The menu at Red Dove Tavern, a gastropub in Geneva, changes weekly to highlight the freshest seasonal ingredients—such as an appetizer of duck leg in rhubarb-barbecue sauce, paired with green-chile grits (reddovetavern.com, duck leg $10).

Do: Go waterfall-spotting. Among the most impressive (and accessible) of the area’s cascades: the towering, 215-foot Taughannock Falls near Ithaca (taughannock.com).

Tucked away in remote southeastern Washington (more than 150 miles from Spokane), Walla Walla is a farm town traditionally known for wheat and onions. But its current cash crops are the ones squeezed into its excellent cabernet, merlot, and syrah. In the past two decades, the number of area wineries has shot up from six to about 125—they’re everywhere from Main Street to the local airport. Even actor (and Washington native) Kyle MacLachlan couldn’t resist: He cofounded a label (named Pursued By Bear, a Shakespeare reference) here in 2005. And thanks to a $53 million facelift, the city’s downtown is lined with cafés, art galleries, and gourmet restaurants.

Visit: The family-owned L’Ecole No. 41, run out of a 1915 schoolhouse, is prized for its signature red blend Perigee (lecole.com, tastings $5, open daily).

Do: Meander through mountains of the Umatilla National Forest, which offers 19 trails of varying difficulties; the scenic, 2.6-mile Jubilee Lake path is good for beginners (541/278-3716).

Stay: Exposed-brick walls and loads of original art create a cozy vibe at Walla Faces, in a 1904 building on the town’s main drag (wallafaces.com, doubles from $145).

Alabama (13 wineries): Until 2002, vineyards here were limited to the “wet counties,” where alcohol sales were legal. Now vintners make sweet wine from heat- and humidity-friendly muscadine grapes grown statewide. You can pick them yourself in September, when Morgan Creek Vineyards in Harpersville hosts an I Love Lucy-style stomping party. morgancreekwinery.com, open Monday–Saturday, bottles $10–$20.

Arizona (48 wineries): Arizona’s high-desert climate is similar to that of wine mecca Mendoza, Argentina. At Caduceus Cellars in the Verde Valley, Maynard James Keenan (better known as the singer from the band Tool) cranks out robust reds such as cabernet sauvignon, merlot, and Sangiovese. caduceus.org, tastings $10, open daily, bottles $17–$28.

Arkansas (15 wineries): Some of Arkansas’s oldest vines belong to Wiederkehr Wine Cellars, founded by a Swiss winemaker who settled in the Ozarks in 1880. The winery is even listed in the National Register of Historic Places. wiederkehrwines.com, open daily, bottles $5–$18.

Connecticut (24 wineries): No matter where you are in Connecticut, there’s a winery within a 45-minute drive. A must-try is Hopkins Vineyard, set among scenic hills in a converted 19th century barn and known for its sweet ice wine, made when grapes—though not the sugar inside—freeze on the vine. hopkinsvineyard.com, tastings $6.50, hours vary, bottles $12–$17.

Idaho (48 wineries): Most of Idaho’s wineries sit in the Snake River Valley, where blazing days and chilly nights make for well-balanced bottles. The Cinder Winery, located in a warehouse outside Boise, is known for its rosé, named Best in the Northwest in 2009. cinderwines.com, tastings $5, open Friday–Sunday, bottles $18–$27.

Kansas (22 wineries): Every bottle at Oz Winery is a friend of Dorothy’s—after all, this is Kansas. Best of all, you can sample wines such as Drunken Munchkin, Auntie Em’s Prairie Rose, and Yellow Brick Road for free—Kansas law prohibits tasting fees. ozwinerykansas.com, open daily, bottles $18–$30.

Massachusetts (40 wineries): Since the small, family-owned Westport Rivers opened on Massachusetts’s southeastern coast 25 years ago, its wine has been poured at both the real White House (courtesy of Bush Sr. and Clinton) and the smallscreen one (via The West Wing). westportrivers.com, tastings $8, open Monday–Saturday, bottles $20–$45.

Minnesota (38 wineries): At Carlos Creek, Minnesota’s largest winery, wines are made from Frontenac grapes, developed by the University of Minnesota to withstand temperatures as low as 20 below. carloscreekwinery.com, tastings $5, open daily, bottles $15–$25.

Mississippi (6 wineries): At the Old South Winery in Natchez, wine is made exclusively from Mississippi muscadines and not barrel-aged, which would interfere with the candy-sweet, fruit-forward taste. oldsouthwinery.com, open Monday–Saturday, bottles $8.25–$11.25.

Missouri (118 wineries): Home to the country’s first Viticulture Area in 1980, Missouri has added 30 wineries in the past three years alone. The 165-year-old Stone Hill, in the German-style town of Hermann, brought home over 100 medals just last year, at competitions from New York to California. stonehillwinery.com, open daily, bottles $8–$25.

Montana (8 wineries): Montana’s short growing season means its handful of wineries have to get creative with their recipes. Flathead Lake Winery—the only state winery to exclusively use native fruit–finds its preferred grape substitutes in local cherries and huckleberries. flatheadlakewinery.com, open daily, bottles $10–$20.

Nebraska (25 wineries): Founded in 1997 with 100 grapevines imported from New York, James Arthur Vineyards has grown into Nebraska’s largest winery—and has one of its coziest tasting rooms, too. There, visitors can warm up by a roaring fireplace with a glass of semi-sweet Vignoles, named the best white wine at 2010’s Monterey (California) Wine Competition. jamesarthurvineyards.com, tastings from $4, open daily, bottles $10–$25.

Nevada (3 wineries): Parking is never a problem at Pahrump Valley Winery–if you have a helicopter. The mom-and-pop spot, which has won more than 300 national awards, has its own landing pad for high-rollers visiting from nearby Las Vegas. pahrumpwinery.com, open daily, bottles $12–$25.

New Hampshire (25 wineries): After demand shot up for LaBelle Winery’s fruit wines (like cranberry and apple), the owners traded their 1,500-square-foot barn for a facility 13 times the size; the new space opens this September. labellewinerynh.com, open Wednesday–Sunday, bottles $14–$25.

New Jersey (34 wineries): At Unionville Vineyards, set on an 88-acre farm, the head winemaker is a Napa expat fond of European-style grapes like syrah, grenache, and mourvedre. One to try: The Big O, a blend of merlot, cabernet franc, and cabernet sauvignon. unionvillevineyards.com, tastings from $5, open daily, bottles $12–$46.

New Mexico (46 wineries): New Mexico’s hot, arid climate and high elevation give a boost to its prolific wine industry (production is expanding by nearly 15 percent annually). Sparkling wine is the main draw at Albuquerque’s Gruet Winery, owned by a pair of siblings from France’s Champagne region. Gruet’s bottles, many of which retail for less than $20, have graced wine lists at restaurants in all 50 states, including many with Michelin stars. gruetwinery.com, tastings from $6, open Monday–Saturday, bottles $14–$45.

North Carolina (109 wineries): The number of North Carolina wineries has more than quadrupled since 2001, but the most popular is Biltmore, on the picturesque, 8,000-acre Asheville estate of the same name. In fact, it’s the most visited winery in the country, with roughly 60,000 folks dropping in each year. The sparkling Blanc de Blanc has been served at New York’s James Beard House. biltmore.com, tastings from $49 including guided tour and access to the historic Biltmore House, open daily, bottles $10–$25.

North Dakota (9 wineries): In 2009, less than half of 1 percent of the wine sold in North Dakota was made in-state. But in tiny Burlington, the owners of Pointe of View aim to change that. Their Terre Haute Rouge, a semi-sweet blush, is made entirely from local grapes. povwinery.com, open daily May–December, bottles $12–$14.

Ohio (148 wineries): Ohio’s winemaking history dates to the 1820s, and the state now churns out more than 1 million gallons annually. Most Ohio wineries are in the northeast, where Lake Erie tempers the cold, but don’t miss Kinkead Ridge down south. Its Viognier-Roussanne and cabernet franc were featured in the 2011 book 1,000 Great Everyday Wines from the World’s Best Wineries. kinkeadridge.com, tastings from $3, hours vary, bottles $10–$23.

Vermont (24 wineries): Northern Vermont’s bracing winters produce fantastic ice wine. Some of the best is made at Snow Farm, on an island in Lake Champlain:  It’s wowed the critics at Wine Spectator and the judges at 2011’s Los Angeles International Wine and Spirits Competition. snowfarm.com, tastings from $1, open daily May–December, bottles $12–$45.

West Virginia (14 wineries): West Virginia makes up for its short supply of grapevines with a bounty of pears, apples, and peaches—which are made into sweet, all-local wine at the 22-year-old Forks of Cheat, in the Appalachian Mountains. wvwines.com, tastings free, open daily, weather permitting, bottles $10.50–$15.50.

Wisconsin (90 wineries): Hungarian immigrant Agoston Haraszthy–often called the father of California viticulture–spent two years planting grapes in Prairie du Sac, Wisc., in the 1840s before he ever set foot in Sonoma. Today, you can imagine what the fruits of his labor might have tasted like at the family-owned Wollersheim Winery, built on his former stomping grounds; the winery has won raves for its Fumé Blanc and Riesling. wollersheim.com, open daily, bottles $6.50–$22.

Wyoming (2 wineries): When University of Wyoming student Patrick Zimmerer planted grapes on his family’s farm in Huntley (population: 30) as part of a school project in 2001, he singlehandedly doubled the tally of
Wyoming vineyards. Eleven years and a $10,000 business-school grant later, his Table Mountain Vineyards has graduated to making 10-14 varieties of wine. wyowine.com, open by appointment, bottles $15.